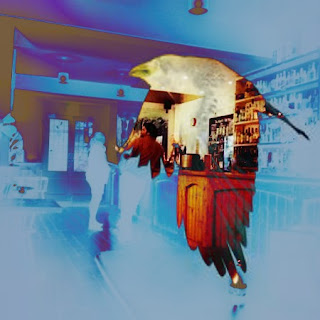 It is August 2002. Myself and my partner, Jude Calvert-Toulmin, are in The Heights Bar in Llanberis, having been to do an on-line interview with John Redhead. It’s been a long day, but we are relaxing with friends in the pub. The bar is crowded, because it’s the opening of their new bistro extension.
John Redhead has vanished in the throng, chatting to old friends, leaving Jude and I to chat to each other and a few acquaintances we’ve bumped into.

Suddenly, a short tubby bloke in a blue check shirt and glasses appears to my right, looking like Ian McNaught-Davis’ dwarf twin brother.

“Are you a climber?” he asks. I reply in the affirmative.
“Bit chubby to be a climber, aren’t you?” says the short, chubby bloke.
I am about to tell him that he’s a bit short to be a climber, and also a bit cheeky not to be told to piss off, when he tells us: “Look. If you want a subject for your next interview, there’s your man!”

He points to a pinch-faced bloke of about fifty sitting cross-legged on a stool at the end of the room.

“Er, who is that?” I ask.
“That’s MICK POYNTON!!” replies the Time Bandit, seemingly unimpressed by my lack of recognition. “I can introduce you.” He adds.  I glance at Jude, who shrugs. We follow the Hobbit over to where Mr Poynton sits, a small court of admirers lagered around him (hey! Perhaps he IS famous!).

The impudent midget sidles up to his hero: “These two people are from the press, Mick!” he enthuses, indicating us.

We aren’t from the press at all, and have no real interest in any interview with some bloke we’ve not heard of. I open my mouth to correct him but he continues: “They want to interview you!”

I start to explain that no, we aren’t from the press, but Ronnie Corbett is off again: “Mick is the greatest ice climber in the country!” he tells us, excitedly.

“Means nowt to me luv!” says Jude: “I know fuck all about climbing!”

We are wasting our drinking time. I am about to go back to my seat, when the leprechaun says the funniest thing I’ve heard all night:
“How much do you pay then?”
“Er, sorry?” I reply.
“How much do you pay?! For the interview? I’ll want a cut of course!”

I exchange glances with Jude and we laugh: “Nothing! We pay nothing. People do these online interviews for free, out of the goodness of their heart!”

Sensing perhaps that the ice man is unlikely to want to do a free interview and, judging by appearances, doesn’t have much goodness in his heart either, Tom Thumb adopts a disappointed air, as though we’ve let him down.
We rise and leave him to his disappointment, and return to our friends, chuckling.

Footnote: I have since scoured old issues of Mountain and found references to Mr Poynton, so he does exist, and wasn’t a figment of my imagination. Whoever he is, he was having a bad day. Who the disillusioned leprechaun was, I have no idea, but I’d just like to say thank you, whoever you were, for making our day.