You are being watched ! 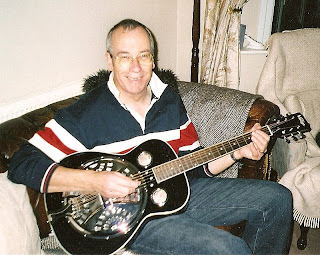 Steve Dean was born in 1950, in South London and educated at Bec School. He was introduced to the mountains of North Wales by early family holidays at Dolgellau and started rock climbing at Harrisons Rocks in 1967. During five years at University in Cardiff, he climbed extensively in Wales and Scotland and made early visits to the Western Alps. Since 1974, he and his wife Janet have lived in Derby, close to the crags of the Peak District and he has only recently retired from a career as an urban planner.Steve’s biography of Colin Kirkus Hands of a Climber was published by Ernest Press in 1993. Since then, he has written extensively for High magazine, Climber, Loose Scree and the Journals of the Climbers Club, the Rucksack Club and the Wayfarers Club. In 2004 and 2005 Steve was a judge for the Boardman Tasker Prize for Mountain Literature and is now on the committee of the Boardman Tasker Trust. He tries to get out on the crags and hills as frequently as possible and his love of climbing and the mountain environment continues to inspire him. 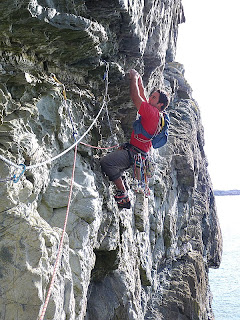 
And so it came to be that it was July and I was out on the Anglesey crags in the ever-fit company of Mick Wrigley. We are both Gogarth fans and the week had started off well; Mick had led us up The Strand on a beautiful afternoon. The climb is described in the guidebook as "one of the outstanding climbs of North Wales" and it is quite brilliant, one of the finest pitches I've ever climbed. The Strand is however on the Upper Tier and to get the full Gogarth buzz you do really need to be down at sea level. The Main Wall or Easter Island Gully with a bit of a sea running sharpens your senses no end and gives the full Gogarth experience. On this basis, the next day saw us walking up from the Holyhead quarries towards North Stack.

Now, for anyone who has not been there, North Stack Wall is an awesome place, with a sombre atmosphere. A conveniently placed telegraph pole serves as an anchor for a very steep 100ft abseil down to the back of the zawn. From the rocks at the foot of the abseil we could see that the sea was still breaking with gusto over the boulders at the foot of the wall but that the tide was now going out. We decided to sit around for a while until our route was accessible and my eye was drawn up the main part of the wall. North Stack Wall is about 120ft high, is very steep and composed of bright white quartzite. The stupendously blank section on the right contains some of the most serious rock climbs in Britain, including The Cad (E6), the Clown (E7) and The Bells! The Bells! (E7). These are not routes for mortals. They are technically very hard and appear to run to little in the way of protection. I was awed by the place, there would appear to be little or no margin for error there. Fortunately, to the left of these modern horrors are some friendlier mild extremes like Talking Heads and Nice n'Sleazy and we had our eyes on one of these once the tide backed off.

As we waited below the wall, the sea gurgled away beneath the huge boulders and I picked up a familiar growling sound that drew my eyes up to the more broken crag on the opposite side of the zawn. To my delight there were row upon row of Razorbills standing on their ledges like wooden soldiers. Periodically one would fly out over the sea and then loop back to the ledge constantly chattering. These cheerful birds are one of my favourites and they all eyed us with curiosity as we scrambled about on the boulders below them.


By now the sun was shining brightly over the sea, the sky reflected like bright diamonds on the constantly broken surface of the water, a pleasing contrast to the shadow of the zawn itself. Mick had decided to opt for the excellent Nice n'Sleazy, a steep groove line that soared up from the large boulders below us, many of which were still under water. Now, Mick is not normally an impatient sort of chap, far from it in fact. Today, however, he was raring to go, but the entry into the route from the boulders is a tricky one. He was soon soaked below the knees as were both ropes and after much laughter and cursing, we decided to wait a little longer until the sea retreated. Before too long he was on his way and from my vantage point on the zawn floor the climbing looked excellent, steep and technical but with reassuring protection. About halfway up the pitch Mick looked down and called out "....ey, we've got some company." Sure enough, just off shore the head of a seal popped up out of the water, followed by another and another and another..until there were twelve, all carefully scrutinising what we were doing. Their ease of movement in the water was a joy to watch and I loved their whisker laden faces staring at us with bright, intelligent eyes and with obvious interest. I was pleased to see the seals, they are a frequent feature of climbing at Gogarth and they brought a delightful humour and warmth to this serious place.

Mick finally reached the top of the pitch and got himself safely belayed. The ropes went tight and I set off up the tricky initial wall into the main groove. The rock is a little brittle in places and very steep, but the holds are positive and reassuring in the main. Some way up the pitch, I looked down on the seals who were continuing to peer up at us.....we were clearly the main entertainment of the afternoon.

At the same time, we were also under scrutiny from the Razorbills on the cliffs opposite. Often when on a pitch or belaying on a sea cliff, I've noticed that some of the Auks and particularly the Razorbills, are genuinely inquisitive and fly out from their roosts seemingly to check you out. So it was today as the occasional one swept round to see what we were up to. It was the same delightful innocence as that shown by the seals and it added to the charm of the place.

I carried on steadily up the pitch removing Mick's runners as he took in the rope. The crux was right where it should be, at the top, and then I was up onto the grass slope by the wall of the coastguard station. I pulled the ropes through from Mick, started coiling them and as I did so I looked down to the sea. The seals had moved on but the Razorbills were still soaring out over the zawn, inspecting the crags below us. High above the beautiful clear song of a Skylark filled the summer sky. We sat awhile and just sorted out the gear. Later we walked back towards Holyhead in the early evening breeze, content after a good day. Gogarth in the summer is a wonderful place and there is something strangely intense and satisfying about doing a good route there. It remains a place scorned by many but a delight to some. What the birds and animals make of our antics remains a mystery! The Gogarth habit had returned; two weeks later we were back and taking the magical mystery tour that is Red Wall. 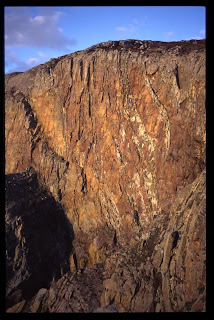