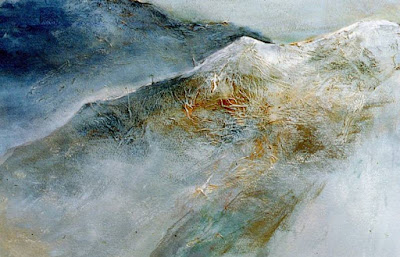 The winter of 1984/5 developed into a hard freeze. Elsewhere Britain suffered under heavy blizzards. In the Lakes there was little snow. For some weeks the roads were relatively clear and free of ice: the sun shone brightly most days and water everywhere on the fells froze hard to the valley floor. It became a classic season for ice climbing. Bill Birkett and I were into it fairly early. I had hacked my way in other years, up many a snow-ice gully. Most times with an ice-axe (once with a sharp stone) — never with crampons! Now it was to be standard 1980's style: front point crampons, ice hammers, ice screws — the full regalia. With such devices the ice we climbed was more vertical than anything I had ever done before. When I saw the first ice pitch on Newlands Hause I gasped. "We'll never get up that!"... "Rubbish' said Bill or words similar in sentiment. "It'll be easy ! " And it was!

By the time we had reached the crest of the Hause I was completely hooked on this, for me, new-fangled technique. Even though the crampons I was wearing had been given to me because they were no good by a chap who'd been presented with them ten years ago by someone else, for the same reason. At the end of nearly a week of continuous climbing (we were out six times in eight days as it turned out) mostly on ice, Bill rang me: "'Do you fancy Coledale Hause Force up above Force Crag Mine? The 'word' has it that it's the best pitch in the Lakes this year' he said.

''Oh Aye!... Downer says so! !", he declared. authoritatively. "It'll be right then if Downer says so.... When are you leaving'!". "I'll be there in an hour' he told me and hung up. I reached the car park at Whinlatter just a couple of minutes before Bill and his mate, Pat Duffy, arrived. The ice, when we got to it, looked fantastic. The stream was frozen for something like seven hundred feet. In the lower half there was much easy ice scrambling before the bed reared up into a pleasant solid ice wall of 60 feet or so. Above this we entered into a small amphitheatre. The ice forms were incredible. Huge bosses and corded icicles.

A massive chrysanthemum of radiating ice petals (obviously containing a small bush. All these ringed the cirque and down the main wall plunged the linked columns of vertical ice, a thick hollow sheet separated from the rock wall to form grottos and caves of breathtaking beauty. It was up this our route lay. Bill rampaged up the wall. Ice flying, front points and ice hammers banging into the vertical knots of ice. In 80 feet the steepness relented and the thick solidified stream fell back into icy slabs and another small cirque and more grottos and ice bubbles and blisters. Pat followed Bill, then it was my turn. It was all joy and heave and disbelief.

The next day my wife, Etsu, my small daughter and I spent most of the daylight hours skating on Derwentwater and that evening we went to visit Chris and Wendy Bonington. I told Chris about the icefall. "Gosh I'd love to do it — but I'm tied up tomorrow and Tuesday:' he sighed. "How about Wednesday?" "No. it's out for me:' I answered. "But Friday's O.K " I'll be on the way to Everest then — we leave Thursday" he said quietly. "but I'd still love to do it!" Then suddenly. "I know! What about a pre-dawn start tomorrow morning? I could pick you up at six; we could be back by nine — and still get a day's work in!" It was dark as we drove alongside Bassenthwaite Lake, with hardly the faintest hint of dawn in the night sky. By 6.30 we were at the foot of the falls, with just sufficient light to enable us to fasten on our crampons. This time I had swiped Etsu's good pair and adjusted them to fit my old and massive Galibiers .With these and another second-hand axe, (acquired from Bill) which felt nicely in balance with my own, my confidence ran high.

What light there was bounced off the ice as we soloed up the lower easier slopes then dawn leapt across the sky. By 7.30 we were in the amphitheatre and Chris was leading up the main ice wall in beautiful style. A hundred and fifty feet higher, with all the rope out he belayed. It was my turn. In better crampons, a couple of good axes and (be it said) a comforting firm rope from above. I set off. At one point some sixty feet up the wall I became too confident (or it could have been tiredness!). The right ice pick, inadequately placed. came adrift and the shock loading on the other caused the ice to burst off around its point. I did an exciting "yo-yo– due to rope stretch as all four contact points ceased to become such, but I was soon away again. It was just 8.15 when we were sitting at the top of the climb. The dawn had reached the valley. Away to the east. Over Helvellyn. a rosy pink suffused the sky. Above our heads the east face of Grisedale Pike was tinged with the same warm hue as the shadow-line moved rapidly down the face. It was all peace and calm and hope. 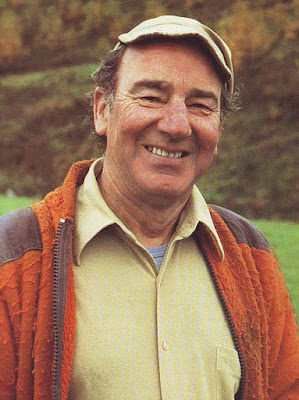 The morning was held in a breathless hush of pinks and hazy blues and a dusting of white in sheltered combes — nothing moved. The only sounds were of our quiet conversation and the tinkle of ice-gear as Chris wound up the rope. As he sat there I thought of another dawn. Nearly fifty years ago. In the early summer above Loweswater — a dawn full of promise and discovery to come — and of the young impressionable coal miner who, coming out of the dark and stink and sweat off night shift. Up into God's clean air, had felt compelled to ride out on his bike to find it. But this dawn here, even in the winter, held its own wonder. And the promises were still there to nurture the questing spirit.