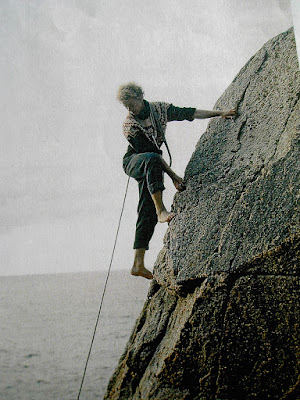 " IN TWO MILES," my husband said, "you'll strike the path. You've got your map and compass?" I looked at him with contempt and strode away through the heather. I glanced back a moment later but he'd disappeared. For the first time I was alone on the Pennines. The cloud thickened, and with the sun gone in, due south was guesswork. In five minutes, with John still virtually within whistling distance, with clear visibility, I was lost in the sense that I didn't know the direction I should take. For the rest of that walk I moved on a compass bearing, even when I could see the other moors because every long smooth ridge looked the same. There was no path, no tree, not even a boulder to tell me whether I walked straight or in circles. I'd met groughs for the first time on Kinder. A Himalayan climber led me along them with only an occasional glance at the compass. I'd met them again on Cross Fell when John made me go down and across and up the other side in deep snow, taking pictures for a lecture on mountain safety.

They are deep drainage channels in thet peat; in winter drifted with snow and perhaps with water under the ice in the bottom. Like crevasses on a glacier they run in all directions; each one has to be summed up. To go round or through. In summer they are a frustrating obstacle, in winter a potential deathtrap for the exhausted walker. Their composition varies. On Bleaklow the peat's aeriated and you can get some sort of hold with the boot (but frozen in winter- they say, it's hell). North of Longdendale they are slimey. The first one I got into here I could find no exit for a while. I tried kicking steps as in snow and slid back each time. Eight feet below the level of the moor I stared along the channel and felt the faintest shade of panic that others must have felt in the same circumstances, or worse. I thought about parties of tired children under an incompetent leader. Of mists and blizzards and darkness. I wondered why people saw a move to Derbyshire after years of living in high mountains as a retrogressive step.

Walking on the two thousand foot moors of the Pennines is one aspect of mountaineering of the highest order. In Snowdonia, in the Highlands, there are features everywhere: gullies, buttresses, identifiable peaks. There, in bad weather, you can find shelter in a corrie or cwm, here there are no features and no shelter. Even in mid-summer you know what it will be like in winter. Gales sweeping across the plateau and bogs half-frozen under-foot. In summer in the mountains you can leave the torch behind and usually you know your own stamping grounds well enough not to need the compass even in cloud. In Derbyshire you take the torch in June and start thinking in terms of a second compass, in the same way a short-sighted person carries a spare pair of spectacles. In the second week of our coming to Derbyshire there were three climbing accidents and two men died. Being connected with Mountain Rescue we went up to look at the site of the fatal accident to try to determine the cause.

Below the cliff were the sordid remains of first aid : stained cotton wool, a wooden spoon. "But it's the wrong place," I pointed out, "they couldn't both have been killed here." The wall above us was scarcely more than thirty feet high. You broke a leg or an arm at thirty feet, some-times you walked away under your own steam. It had happened to both of us. But this was the place: the proof lay in our information from the rescuers and the cotton wool. We climbed the wall looking for traces of a slip or a broken rock. I hated every move. Afterwards we moved away to another climb and suddenly the rock seemed lighter and the wind less cold. For a mountain guide, that first fortnight-was a salutary introduction to the High Peak. 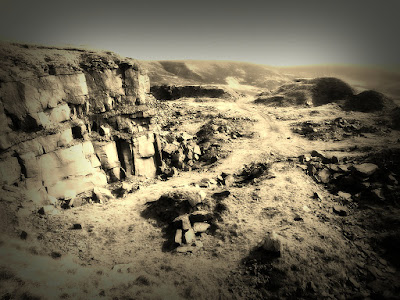 You adapted quickly; you had to. By the second Sunday the ravines were no longer `ghylls" but "cloughs." And underlying my delight in the sudden revelation of their beauty: the flycatchers in the billowing oaks, dippers singing on orange rocks in the streams, was the awareness of that other world a thousand feet higher where, even on Sunday in this enclave between Sheffield and Manchester, your only company was curlew and golden plover (and the grouse telling you to go back, go back)—where you walked two miles for every one on the map—travelling on bearings in perfect visibility.