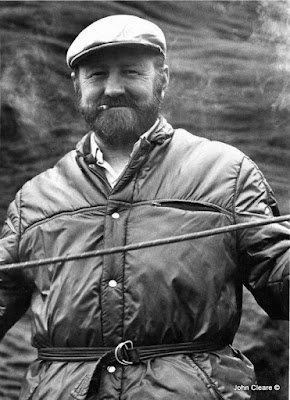 His reputation was already established when I first met him in 1962. He had agreed to come to Derby and give a lecture at our youth club and was to meet me at our home before the 'Do'. I was apprehensive, a word which my ex wife always says is my euphemism for 'shit scared.' Anyhow, he turns up, says "How do?" and lies on the floor to play with Elaine, our one year old daughter. He asks for a fee of £5 for the evening, which covers his petrol and a couple of pints, a phrase I come to know well over many years. He has already eaten at Nat Allen's. He gives a great lecture, not only to the club but to Derby climbers in general and no words of mine can express his unique style. Not only did he entertain on that Friday evening but he came out to Stanage the day after and climbed with the lads, obviously enjoying himself. Don became a friend and a regular visitor to Derby. There are so many memories but a couple stand out as if they occurred only yesterday. I was alone this particular weekend; the family were at Granny's in Liverpool. In he walks, "Ow yer diddlin? Fancy a day out?" "Do you want a brew?" I ask. "No, ta, I've gorra mate with me, the Gaffer in fact, he's called Arthur. He's alright, but I need a bit of support like." "Where do you want to go?" I ask. "Treemudrock." Well, that's settled then, he doesn't muck about making his mind up doesn't Don.

"I'll see you at Erics in a bit; I'll get my gear sorted and follow on." I overtake them at Rhyd Ddu, Arthur's old builders van isn't fast anymore. Arriving at Eric's cafe I get the teas. The van arrives before it has gone cold and I ask how many sugars. "British standard climber," is the answer I get. That means two lumps, spoonfuls or whatever is going. I think the expression started with Pat and Baz Ingle. In those days the locals had a lot of colour in their speech. It had something to do with the mix of origins. North Wales in the 60's was a retreat for so many climbers from England & Scotland or wherever. Don said that he had never done 'First Slip', so we knew what we were on. Arthur hadn't said much, but as we made our way up through the trees he said "Is it hard?" "It all depends on if you get it right," was as much consolation as he got from Don. Arthur sat by the tree at the start of the first pitch, I tied on after offering Don the sharp end, which he refused. I thought he was scheming to get the long, main (and best) pitch. I arrived at the stance. There was a tree there in those days and it was occupied by two Americans.

I said nowt and brought Don up. He immediately started up a conversation with the second, whilst the leader appeared to me to be struggling above. Don was in good humour so I suggested bringing Arthur up to the stance. "Leave the bugger down there, there's no room up 'ere." The leader was definitely scrabbling in the main, crux, groove above us, I nudged Don. Sure enough, a few seconds later the U.S.of A. flashed past. Don stops short his banter, "That makes it your turn Barney, he says aloud, then whispers in my ear "You can bloody do it, can't you ?" The Americans are dismissed in an instant, I climb past the somewhat shaken second and place a runner high up under the roof. Hand traverse, followed by this thin, open groove then the jug for the left hand and I'm on the stance. His head appears quickly at the bottom of the groove and I notice for the first time that he's wearing boots not PAs. I say nothing and watch. He swings to face left, grabs the vertical arete and laybacks calmly up. "Bloody hell, I've never seen it done like that before," I tell him as he perches on the ledge alongside me and lights a fag.

"Ow did you do it then ?" he asks. I tell him, shoulder against the left wall, finger tips in crack and at the jug, bridge out. "Why didn't you tell me then?" he grunts "I'm telling Whillans how to climb am I?" " Bring Arthur up then" I do as I'm told . Arthur isn't a natural. Beneath the overhang are a set of very good hand holds, boot scrapes and, with a little up swing, one lands on a really 'comfy' ledge. He gets it wrong and falls off. Fortunately he arrives directly beneath the groove and, with a bit of help, installs himself on the ledge below the difficulties. "Barney will tell you how it's done," Don says. "He wouldn't tell me though, the bugger." I explain, he starts upwards. The first two moves are thin and he falls a couple of times. "Arthur, we're climbing today, not bloody flying." Arthur finally arrives, shattered, at the stance. Don doesn't move, he isn't belayed and he still has his fag to finish. He looks disdainfully at his Gaffer. "John's led us so far, so that makes it your lead." Arthur's face says it all, "Is it hard?" I assure him that it isn't and that the pitch is well protected and not strenuous. 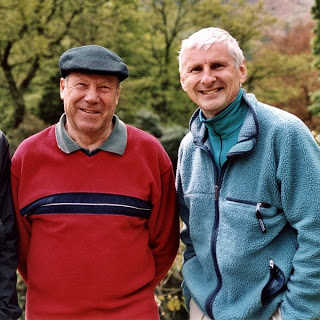 The irrepressible 'Barney' Brailsford (Left)
With courage he moves up, slowly, until he reaches the trees into which he disappears, the ropes run out, then stop. His temporary ordeal is over. Don has gone, he ambles out of sight whilst I go through the ritual of all seconds, shout "Climbing," and follow up to the top of the route. "What's next then, Don?" I ask. "Tensor, I haven't done that either." Arthur sidles up close, mouth to ear, "Is it hard?" he asks. Back in Eric's cafe I ask Don why he climbed in boots. "I realised halfway here that I'd left my PAs at home, your place was near and I knew you'd come out and lead." Crafty sod, but we had a good day. A few weeks later Arthur and his son, Roy, were lost on the Matterhorn.