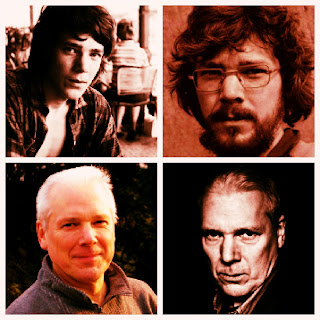 The Ages of Ashton: From Alpine virgin to Sheffield underworld hitman.

For those of us who remember the late lamented High magazine,one name which stood out from its cast list of regulars was the one and only Steve Ashton. An outdoor columnist whose monthly pieces became increasingly surreal and left field as the years went by. As a traditional climbing columnist writing about  the merits or otherwise of  a Zebedee Gore Tex Kag,  or whether or not fleece Y fronts would enhance the outdoor experience for the winter activist, Steve began to go a bit mad!

To the chagrin of the earnest readers to whom climbing was a serious business and who really, really wanted to know whether mittens were a better bet than gloves or if in an emergency you could live on Kendal mint cake for a week, Steve began to morph into the SJ Perelman of the writing fraternity. His columns became increasingly funny and irreverent to the extent that by the time High passed on into history, his columns-if I remember correctly-appeared to be shrinking in proportion to the increasing surrealism. It was as if editor Geoff Birtles didn't want to fire him but thought that by contracting his space to half a page,he might just  get the message and bugger off!

One of Steve's features was  a zany mountaineering A to Z which was more Monty Python than Walt Unsworth. Now, umpteen years on, Steve's High pieces have been dug out,in some cases re-worked,added to and put out as an eBook through Blue Lizard Books as 'Diddly Squat's Encyclopedia of Mountaineering'.

An eBook. I can't imagine when Steve started writing his High pieces all those years ago; perched on a sawn off bar stool behind a typewriter; sustained by strong tea and Tippex- that he would ever have imagined his material being read in the future on a luminous Etch-a-Sketch ! All a bit too Flash Gordon for an old hack I imagine.

But here it is. Available now and costing the lucky purchaser peanuts. No..literally! Diddly Squat's Encyclopedia of Mountaineering costs less than a  300g bag of KP dry roasted peanuts although slightly more than Aldi's own brand.

I don't think Steve would be offended if I predicted that his work will probably not make it onto the Boardman-Tasker list next year. But then again, how many BT winners would cause the reader to spray coffee all over their keyboard? 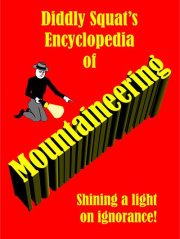 J Dawes
A charismatically cinematic UK climber of lemurian nature (agile, tenacious and a bit of a monkey). No relation to film star Diana Dawes, the busty 1960s sex bomb. Born in 1964, Johnny ‘Dyno’ Dawes was blessed with an acrobat’s physique, a philosopher’s brain, and a warrior’s heart. He also had the good fortune to inherit a surname that could be wittily incorporated into a route name. All these attributes found their greatest expression in the Llanberis slate quarries when he created Dawes of Perception. Expect to see Revolving Dawes, Fire Dawes, and Shut them Dawes, as the inspired pretentiousness of youth gives way to the weary cynicism of middle age.
Eiger
Notoriously dangerous mountain in Switzerland that has claimed the lives of dozens of mountaineers drawn to attempt its fearsome north face. After many tragic failures by European teams, north-American climber Clint Eastwood finally succeeded on the Nordwand accompanied by disaffected CIA agents and a Hollywood film crew. The townspeople of Grindelwald subsequently elected Eastwood mayor in recognition of his services to tourism.
gardening
Euphemism for cleaning vegetation, lichen and loose rock from a potential new route, usually from abseil. Also, the practice of suspending hanging baskets from unsightly bolt hangers at Malham Cove and other Yorkshire limestone crags popular with tourists. Try a mix of sweet peas for their fragrant flowers, petunias for their long stems, and begonias for their blousy blooms. If planting a winter basket, combine winter pansies, primula and trailing ivy. If you underplant these with dwarf narcissus and tulips, you will have splendid display come springtime when the new climbing season begins
helmet
A lightweight shell that protects the head from falling stones and ice. Helmets coordinate well with colourful alpine clothing so are widely used in that arena. Unfortunately, they clash with the skimpy tops worn during rock climbing magazine shoots and so have never become widely fashionable. To counter this, a recent BMC safety campaign displayed stoved-in heads atop metal spikes at the approaches to popular outcrops, but, unlike the falling rocks, this had a negligable impact.
Outward Bound
An adventure training philosophy that develops character by plunging students into cold mountain streams, dragging them up outcrops, and forcing them to endure celibate nights in sodden sleeping bags. This approach is at odds with the alternative philosophy Inward Bound, which leads to spiritual serenity through soaking in warm bubble baths, levitating up incrops during alcohol induced reveries, and sleeping under a king-size feather duvet with Miss Backlash and her astonishingly inventive sister.
send
Americanism for the act of making a successful ascent, as in: “You bitchin’ on my leg? Send that muthafucka, yo!”, to which the nearest British equivalent might be: “Are you serious? I’d say you have a jolly good chance of successfully climbing that route.”