All the Young Dudes: Odyssey a climbing road movie review 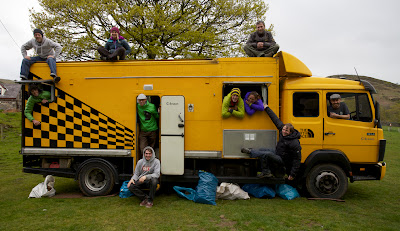 Bliss was it in that dawn to be alive, But to be young was very heaven!

I've an idea, lets get a climbing crew together,comprising of some of our brightest young stars and make a climbing road movie! Well...as creative ideas go this one,it has to be said comes off pretty well in one of Hot Aches latest flics-  Odyssey-a climbing road movie. Although somewhat contrived in conception compared to recent Hot Aches films such as The Pinnacle and The Long Hope which had a overall historic coherence, Odyssey is just a fun film but no less entertaining for that.

Featuring UK climbing's favourite poster girl, Hazel Findlay with fellow Brit James Pearson, Austria's Hansjorg Auer and French mademoiselle Caroline Ciavaldini, the shiny happy twentysomethings accompanied by the Hot Aches crew take to the road over summer and strut their stuff on some of our most iconic crags and routes. Kicking off oop north, the 1987 Merc truck trundles up to the Northumbrian outcrops where the team sport themselves in the sun on a range of short hard climbs while interviews break into the action.

The fab four are honest and engaging in these short inserts. Hansjorg Auer and Caroline Ciavaldini skillfully massage UK sensibilities by paying homage to our strict trad ethic which for a sports climber like Caroline appears eccentric but admirable. Hazel Findlay by contrast at one point appears to regret our strict adherence to our trad ethic which in her eyes has held UK climbing back technically before coming to her senses and sighing, 'but that's what makes UK climbing special'  Furthering her appeal to the Ken Wilson fundamentalists is secured when, after cruising Ron Fawcett's Gogarth E6-The Cad- she declares she would never bother climbing it if it had four bolts...why four?...because it would be 'too easy'. Feel free at this point to exclaim..'What the !!!.

Paul Diffley and Hazel Findlay doing what they do:Hot Aches

Despite sharing the screen time,there is no doubt that Hazel is the star of the show. Taking monster lobs and dissolving in a fit of giggles as her traumatized second bounces around staring at the soles of her rock shoes. Soloing up Soap on a rope-E4- on the Llanberis slate with the dark, fathomless cold waters of the flooded quarry pit just a toes' width away. Cruising up Nescliffe's Tombola-E7 and what looks like a pretty vegetated Pavey Ark -E6 which she declares one of the best routes she has ever done.

That's not to say that the rest of the team don't impress with their contributions. James Pearson who at the start of the film,sits in a Langdale camp site and tells us he is too weak to be a top sports climber and perhaps his days of pushing the envelope are behind him but then takes on two Nescliffe test pieces defined by their technicality and lack of protection-My Piano E8 and A thousand setting suns-E9 and then declares at the top.....'it was quite easy actually'!

Genial Austrian Hansjorg Auer impresses by making a ground up ascent of another Fawcett 80's test piece-Tremadog's Strawberries E7 and isn't he chuffed when he tops out! Deferentially doffing his cap to the routes creator and offering his amazement that such a bold line should be created back in the mists of time...1982! 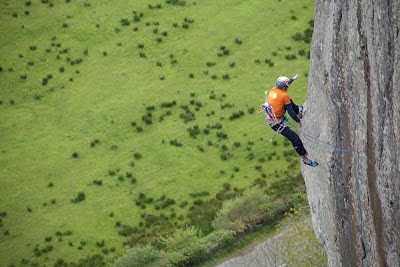 Caroline Ciavaldini-'one of the balliest climbers around' apparently gets stuck into Strawberries, Comes the Dervish and a Pemboke E8 and impresses with her tenacity. Strawberries proves a bridge too far but everything else falls under her Gallic spell.

It's interesting that North Wales is at the centre of the action. Apart from the Northumbian and Langdale sections,the action is centred on Tremadog,The Slate, Gogarth and Nescliffe just across the border.

Like all the Hot Aches climbing films I've seen, the action is beautifully shot and creatively edited. Filmed by Matt Pycroft, Matt Sharman, Dom Bush and Paul Diffley and directed by Dom Bush, Odyssey, running at just over an hour, is fine little film which captures the sheer joie de vivre of young climbers living life to the full and on the edge. As climbing movies go,it sure beats watching bearded middle aged men dragging their beer guts up crumbling Diffs!