The Central Pillar of Freney 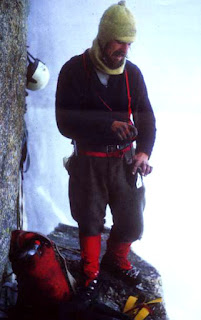 
When I first knew Pete Minks he was finishing his apprenticeship as a plumber at Camell Lairds ship yard in Birkenhead. One Saturday night in the pub in Llanberis, Pete told me about him being turned down for a mortgage. The guy at the Building society had examined Pete's wage slips and told him he did not earn enough money. He then suggested that Pete should go and get a semi skilled job on the production line,making cars at the Ford plant in Halewood.

I suppose if the guy had looked beyond the wage slips and taken account of the fact that Pete had a very secure trade, life would have taken an entirely different road for Pete and Noreen, his then girl friend. I recently self published a book and after finishing it I found an article that Pete had written in 1973 about our ascent of -the Central Pillar of Freney in 72. In the late sixties and seventies Pete became a very good climber and mountaineer and socially more than a bit wild. His record of major routes is massive. He died this year having lived in America for decades. After seeing Pete in Yosemite in 73 we sadly never met again. I hope the reader enjoys Pete's article as much as I have. Certainly the people who knew him will.


"Has anyone been for the weather forecast"? Afternoon storms again; just the right weather for swimming. Apart from a few days off, (festering) when I had done the North East Pillar on the Droites with Pancho, this had been the pattern for the last few weeks. I had also managed to pass 'Tut' Braithwaite onto Cliff Phillips.
I arrived back on the campsite one afternoon with 'tiger' Mick, to find Richard McHardy, who had just cycled out from England.

Ows yer arse mate"? It'll be better when I get off it, onto a route," "Well, what dyer fancy then...Central Pillar of Freney?"..."Okay" Christ what have I said!!! "Pete where's your helmet"? "Left it in the tent love!" Sue arrived back on Barbara McHardy's bike with my helmet just in time to catch us at the Telepherique station. "It's a good job Barbara doesn't know that I haven't got mine, or we'll never get away!" said Richard.

On the 'pherique we bumped into Pat and Shea who were on their way to do the Old Brenva route.    One hour later we were walking across the Vallee Blanche with the Walker Spur on the Grand Jorasses in profile; down, underneath Mont Blanc du Tacul; back, up through the crevasses and round past the East face of the Grand Capucin; easy ice onto the fixed ropes up to the hut on the Col du Trident. Half a dozen brews and a jambon sandwich then a couple of hours sleep on the table.

Two hours, a jambon butty and a few brews later the four of us were descending the slopes down to the Brenva Glacier. Walking in the footsteps of the climbers who had managed to get away before us, within an hour we were underneath the Col Moore. Here we encountered the usual early morning rush hour crowd tackling the steep ice slope. We said goodbye to the two Irish lads who quickly soloed up the ice slope to the foot of the Old Brenva Route.

The way down from the Col Moore was steep and loose. We were about two hundred feet below the Col when a block the size of a table came hurtling past, only missing us by inches. We decided to wait under an overhang until the other parties had gone past-then we carried on down, kicking rubbish on top of them instead! On beneath the Brenva Face and the Eckpheiler Buttress, up the icy Peuterey Couloir onto the Col du Peuterey. 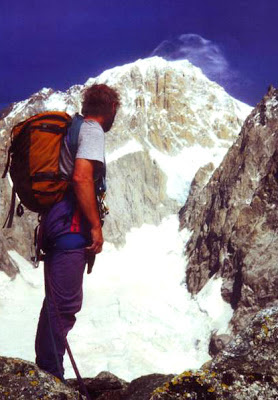 Looking up to the Freney Pillar from the south ridge of the Aiguille Noire: David Tidmarsh

It was now 10am and so far we'd taken nearly eight hours from the hut. We decided to stop for a rest and a brew inside an Igloo on the right of the Col. Within five minutes we were in residence and proceeded to brew up, eat and smoke in rapid succession. An hour later we forced ourselves to move out of the relative comfort of the Igloo and back onto the route. But outside the weather had deteriorated considerably. The Pillar had disappeared in cloud that had come over from the other side of Mont Blanc. We decided to wait and see if the weather would improve.

By 2p.m. the weather was still the same but we decided to go anyway. Retreat from low down on the pillar should be fairly easy if the weather became really bad. After a few rope lengths we came across a good ledge big enough to lie down on and before long we were preparing our bivi.

As with all bivouacs the dawn didn't come too soon. The weather was good- not a cloud in the sky. So after a quick breakfast we were soon back on the rock. At this point we were slightly off route but Rich soon put that right by leading up a superb pitch on steep rough granite to put us back on route.
On up steep exposed slabs, at about grade IV and V, with an overhanging corner, well laced with pegs. More slabs and corners brought us very near to the Chandelle. Here we found some bacon left by a previous party- I put it in my sack for future use.

A few more rock pitches followed by an easy snow are^te led us to the foot of the Chandelle. It was now 3p.m. and climbing conditions were far from perfect. The cloud still hadn't cleared and it was getting colder. A steep wall led round the are^te and up to the start of the crux pitch. This was a steep corner topped by an overhanging chimney-grade VI all the way but with pegs and wedges all the way up. The overhanging chimney proved awkward because my sack kept on catching. The final moves were very exposed but good jugs followed by a jamming crack landed me at the belay. By the time Rich reached the etrier that I'd left it was covered in hoar frost. Two more rope lengths brought us to a small ledge with barely enough room to sit down on. Here we brewed up and fried our bacon before preparing for another uncomfortable bivouac.

The night dragged on for an eternity. We were both cold, damp and uncomfortable. Most of the night was spent drinking a foul concoction which was supposed to be coffee! It was warm and wet but was beginning to produce ominous rumblings deep down in my intestines!Morning eventually came with a blaze of glory. Another fine morning. I sprang into action and regretted it immediately. I started by puking up last nights supper followed by an attack of diarrhoea of Himalayan proportions. This continued for some time during which I cursed the coffee and bacon and finally I cursed Richard who seemed to be completely unaffected. We packed up our gear and Richard led off up the final slabs. These were heavily verglassed and proved difficult. I followed behind determined to keep going despite puking every few minutes.

We abseiled to the breche behind the Chandelle and started up the steep snow are^te leading to the Innominata Ridge. The climbing was straight forward over hard ice covered by a layer of soft snow and we climbed together until we reached the ridge. Here I ceremoniously deposited a pair of soiled underpants which were beginning to cause us both offence. I was now feeling much better and was only puking occasionally. We soon completed the climb and finally stood on the summit of Mont Blanc. The weather was superb.

We descended to Chamonix that same day via the Vallot and the Gouter huts. Once back in Chamonix we settled down to some serious, undisturbed festering. 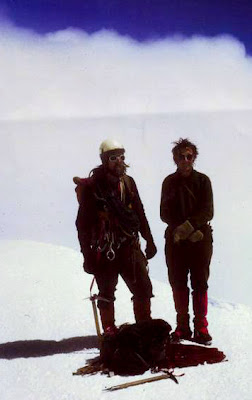 Richard McHardy's autobiography 'Echoes of a dream-a crag rats tale' will be reviewed here in the next few weeks. Copies can be ordered by clicking on... Echoes of a Dream