Rock Climbers in Action in Snowdonia: Forty Years on. 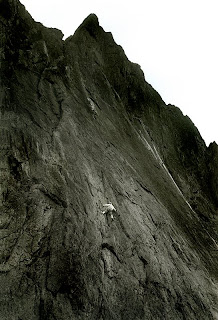 "Our bible was 'Rock Climbers in Action in Snowdonia' which we used to borrow alternately from Birkenhead Library so that no-one else could get it, and Alan used to speculate about how hard these climbs really were.. Nick Parry recalling early schoolboy climbing days with the late Al Rouse.)
Forty years on, it is clear that 1966 was quite a year for British climbing. The growth in the sport's popularity was well under way and that year saw the publication of Chris Bonington's instant modern classic "I Chose to Climb", the Eiger Direct was climbed in a blaze of publicity that quickly pushed a young Dougal Haston onto the world stage. Chris Bonington, Rusty Baillie and Tom Patey climbed the excellent East Face of the Old Man of Hoy (a year before the legendary television broadcast) and the rapid exploration of the sea cliffs on Anglesey put the name of Gogarth on the lips of all serious climbers. An exciting time of cultural and social change, 1966 also saw the Beatles release their finest album Revolver, Bob Dylan released the wonderful Blonde on Blonde and a young American guitarist settled in London and recorded his first single "Hey Joe". Truly Jimi Hendrix seemed like something from outer space and typified an exciting era. That year also saw the publication of the first really modern book about climbing in Britain, "Rock Climbers in Action in Snowdonia" by John Cleare and Tony Smythe. At last something had appeared in print that in words and pictures really managed to convey just how rock climbing felt. The book changed the whole way we looked at the sport and in its brisk and businesslike format was a wonderfully cool piece of work capturing the era beautifully.
It is now the fortieth anniversary of what turned out to be a hugely influential and much loved book and the time seems right for an affectionate reappraisal both of the photographic aspect and the text. Perhaps a little unfairly, given the quality of Tony Smythe's well thought out prose, the book is perhaps best known for the superb quality of John Cleare's near-iconic black and white photographs. The book contains thirty nine plates all of which serve to capture something both of the nature of hard climbing and the mysterious nature of Snowdonia itself. At the time that the book was produced, John was working in London as a fashion and advertising photographer and climbing regularly in Wales at weekends. A contract was agreed with the publishers Secker & Warburg in late 1964 for an advance of £60 and work on the book commenced. The publishing director at Secker & Warburg was Robin Collomb, and to quote John Cleare "...that book was Robin's initial inspiration. Having seen some of my pictures around, he invited me out to lunch and suggested I did the book. His idea was that it be the first of a series, to later cover The Lakes, Scotland and the Alps, but just before "Snowdonia" was published he moved on from Secker & Warburg, and that was the end of an intriguing project." John was already a very experienced climber, but the production of many of the photographs required considerable persistence and effort.
The scope of the photographs is of great interest, ranging from the famous images of Cenotaph Corner, Cemetery Gates, Hangover and The Thing in the Llanberis Pass, to dark atmospheric shots of the then modern routes on Clogwyn du'r Arddu and bright sunny shots of Tremadoc. In addition there were various illustrations of climbs situated elsewhere in Snowdonia, my own favourite being a superb image of the wall of Mur y Niwl in bright sunshine. Perhaps the finest of the photographs is that of Pete Crew on the Great Wall of Cloggy, Welsh Gothic at its finest and an image to wet any appetite. Many of John's illustrations in the book have become famous, and rightly so, they were the finest examples of the art at that time and were hugely dramatic.

John's own account of the project*  Mountain 1987 tells us of how he drove up from London to Snowdonia over thirty times in the period through the (often wet) summer of 1965 to try and get all the necessary photographic work done. Despite the often poor weather, he was fortunate in being able to enlist the help of a number of the top performers of the day including Pete Crew, Baz Ingle, Rusty Baillie, Martin Boysen, Dave Alcock and Dave Potts. John recalled how he often used an abseil rope to get in close to the action and wide angle lenses to enhance the perspective. Although not unusual today, no one had really tried to photograph climbing in this way before and the results were often wonderfully dramatic. John's work vividly captured the feel of hard climbing; the sweat on the fingers and the dry mouth as a hard or bold move was executed. Nothing like this had been seen before and the quality of the photographs were the foundation of John's reputation as a master of mountaineering photography.
When John got the project under way he initially approached Al Alvarez (many years later the author of 'Feeding the Rat') to produce the text. Such was the demand on Al for his writing skills, that he was unable to take on the work. As a result John approached an old school friend and regular climbing partner Tony Smythe to put pen to paper. At the time Tony had recently returned from Alaska and had worked for some time at Plas y Brenin. John's choice turned out to be an astute one, Tony Smythe knew the nature and character of Snowdonia very well and whilst not one of the elite climbers of the period was a very able extreme leader who knew his way around. The text Tony produced is to my mind something of an understated gem that perfectly balances John's excellent photographs. In less than 40,000 words Tony manages to combine the traditional and contemporary aspects of Welsh climbing and his text retains a strong sense of awe and mystery about Snowdonia itself. It includes interesting accounts of early days in Ogwen, personal experiences on the hard climbs of the day (the high prestige still attached to the likes of Cenotaph Corner, The Grooves and Vector for instance is made quite clear) and something of the legend and awe attached to the heroes of the day. It is for instance fascinating to read the sections about Joe Brown and Don Whillans written in 1965, and to realise just what a vast influence they and their exploits had on British climbing at that time. Tony's text also conveys the sense of increasing pace and modernity creeping into the sport as traditions, even those of the fifties, were being rapidly eroded. Along with the traditional flavour of some of the text, there is a sense also of urgency and rapid travel in cool new cars like Mini Coopers, to a background of music by The Beatles and the Rolling Stones. A new modern age had arrived and this was a period largely dominated in Wales by the climbers of the Manchester/Sheffield based Alpha Club. Some of the Club's members featured in John Cleare's photographs but despite the pre-eminence of this youthful group, there was still huge respect for Joe Brown at that time. (Joe was all of thirty five when the book was being written and had barely begun his extensive exploration on Anglesey.)....To be continued
Part Two: Friday 12th February 2010. 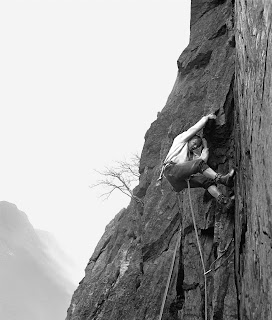 Pete Crew fighting Erosion Groove.
This strenuous and very fierce climb was pioneered by Don Whillans: John Cleare
John Cleare/Mountain Camera Library©
First published in the Climbers Club Journal. Special thanks to Steve Dean for permission to republish this article and great thanks to John Cleare for submitting these iconic images and granting permission for their re-publication. Not forgetting my thanks to The Climbers Club for their cooperation.