Alex Honnold's 'Alone on the Wall'....Review 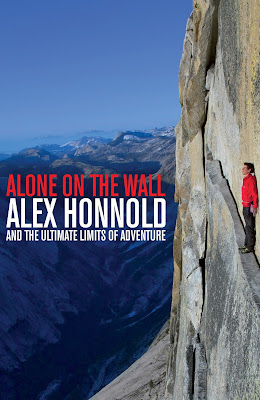 'What's Alex Honnold's greatest achievement' asks a CBS reporter of elder statesman John Long. 'His greatest achievement?....staying alive!!!'. Following on from the 2010 documentary, 'Alone on the Wall' which first brought the electric talent of Sacramento rock dude, Alex Honnold to the attention of the wider public, the forthcoming publication in the UK of the eponymously titled book-jointly written by Honnold and respected mountain writer,David Roberts- offers a fascinating and revealing perspective on this climbing phenomenon. Someone who displays paradoxical character traits of warmth, modesty and bonhomie when talking about his achievements, with an almost robotic detachment from natural human fears and emotions when in his natural environment; strung out in extremis on a rock face with nothing but a tenuous smear and a finger lock between himself and the grim reaper.

For mere mortals who climb-never mind the non climbing public- seeing Alex casually making thin, insubstantial bouldering moves a thousand feet above the ground on traditional climbs which 90% of climbers would struggle to lead, never mind solo, is truly mind blowing. Suffice it to say, reading his firsthand accounts of these ascents in Alone on the Wall  just confirms our suspicions that Alex is a rock climbing Terminator! Single mindedly bulldozing his way through apprehension and vacillation and slaying the inner fears and doubts which earth 99.9% of climbers within their technical limits.

Opening with Alex's account of his groundbreaking solo ascent of Moonlight Buttress- the classic route up a sandstone tower in Utah in 2008- the book alternates between Alex's firsthand accounts written in his at times 'Waynes World' lingo to David Robert's sober narrative which puts Alex's achievements into an objective context. As a literary device I think it works well as its always interesting to see how different authors with different voices and from different generations interpret and communicate the same event.

Those climbing anoraks who have followed his meteoric climbing career will be more than familiar with his milestone achievements. Since Moonlight Buttress he has made over 1000 top end solo climbs and undertaken a host of speed record climbs with partners, including an incredible 2 hour 22 minute ascent of El Capitan's Nose. His ascent of El Sendero Luminoso (The Shining Path) in Mexico, a 1700' route rated at 5-12d -or around E6-6c in UK terms-was described at the time as 'the most difficult rope-less climb in history'.The climb which was filmed and shoe horned into a six minute clip by Renan Ozturk, was described by Jeff Jackson editor of Rock and Ice who did the first roped free ascent of the route as... 'In a different Realm entirely-so bad it makes me wonder if Honnold will ever get another visit from Santa.”

Not that Alone on the Wall is entirely rooted in the solar sated world of the West Coast or Nevadan and Mexican deserts. Honnold and Roberts detail expeditions to Alaska, Newfoundland, Patagonia and Chad,and its in Chad where Alex undergoes something of an epiphany. Shocked at the poverty and destitution visited upon the friendly indigenous population, he resolves to use his fame and modest income from climbing to help those in need, both here and back home on the Native American reservations. Borrowing from Schumacher’s idea of Intermediate Technology to help those in the third world, The Honnold Foundation which he establishes,addresses the problems encountered when attempting to provide basic services to remote communities, through the application of renewable technology; small scale wind turbines, solar panels and off grid alternatives to first world utilities which are not an option for most rural communities in the third world.

Complimenting the non climbing narrative is the highly personal account of his off/on relationship with girlfriend Stacey Pearson. The difficulty in maintaining any sort of relationship while living in a van and living the life of a peripatetic dirt bag climber, is painfully laid bare and revealed to be an almost impossible challenge. It’s hard not to feel sympathy for Stacey. Particularly when one considers not just her partner’s travelling lifestyle but the fact that Alex is engaged in a practice from which less than half of this tiny band of top end practitioners survive.

'Names' flow freely throughout the book. Tommy Caldwell, Dean Potter, Conrad Anker and our own Hazel Findlay and James Pearson. All respected and given due credit by the man known to his friends as 'Alex No Big Deal' and who doesn't consider himself a strong climber. It's this shy modesty and his ethical approach to living which aligned to his supernatural ability on rock which makes Alex Honnold such an attractive personality and hero within the climbing community. It's hard to detect an ego or arrogance behind the writing. Both authors relate what are after all, out of this world achievements, in a restrained manner which if anything, underplays the events described.

Overall, revealing, entertaining and inspiring and it’s a doubleplusgood bonus that a chunk of the proceeds of the book will find their way into the excellent Honnold Foundation coffers. Alone on the Wall is out on the 5th November in the UK.