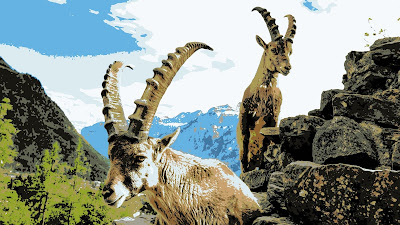 I HAVE a dream of a perfect piece of landscape — everything is what I want it to be, green meadow here, rocky limestone towers there and the odd gingerbread house dotted around the lower bits. Its a model, like those Lego land villages, but much, much better; more realistic and more sympathetic, yet being so perfect it is much less possible, a more genuine fantasy. It is alpine, with wild rocky towers, tall dark conifers and rounded green meadows; all these exquisite features are linked by narrow, but well made and marked, winding pathways. The surfaces are carefully tended like the best Swiss and Austrian examples, deliberately winding through changing and challenging landscapes yet making access easy — a real delight to follow. 'You see what I mean, its an old hobby horse of mine; I would prefer our hills, especially the popular areas, to have access created by easy well marked paths. It would destroy a few people's idea of a wilderness experience; it may lead a few tourists into weather they can't handle, but it would give many more a moving hill experience just like so many British walkers and mountaineers get in the alps.

But to continue, for this is about a journey through this exquisite land. It's about a run, or rather a jog, not because I want to pass quickly, but because I want to carry little or nothing and I always want to see around the next corner. I alight from a toy train at a station which is a milk churn stand in a field, it is 8.00 a.m. on a surprisingly warm October morning and the way is obvious. A metalled path winds enticingly upwards through indescribably green rising meadows towards a little village and onion dome church a kilometre or so away. There are no field boundaries but carefully spaced pointed wooden toy town farms, balconies bedecked with flowers, indicate a carefully apportioned landscape. At the onion dome village a small cable car rises a thousand metres over more meadow, then forest and finally limestone towers to the final peak on a long fang like ridge of limestone. I ignore the car and jog gently upwards, the ascent so well graded and picturesque that I barely notice the 500m of climb I've done so far.

The metalled footpath and pastures finish at a little but and cafe below the first of the white screes and crags of the ridge above. I walk the next 500m of ascent, intrigued by the crags through which the now strong path zig zags. The limestone is not dolomite but shining white Yorkshire stuff with the bedding tilted on edge giving crags of white sheet like slabs made easy by numerous lines of jugs and flakes eaten into the surface by water flowing down the surface —everything looks about V.Diff or easier. Below the final tower containing the top station of the cable car a path traverses off rightwards to gain the ridge; I take this and in a few hundred metres I'm jogging along a perfect little path that winds along the undulating crest of what is really a quite sharp limestone ridge. On either side a couple of hundred metres of cliff give way to steep forested slopes — down the side I haven't seen before, the forests continue down for over a thousand metres to flat valley bed containing a large milky green river. The ridge may be exposed, but the path constantly weaves from one side to the other giving little time to appreciate the exposure on any one flank. Small stunted junipers smell nice and impart a garden like atmosphere to this high place.

This dream like situation continued for three kilometres — its called the Hoher Kasten ridge — until a tiny grassy saddle was reached after which all progress was stopped by a monolith limestone tower rising from the saddle. Half on the saddle, half hanging in space was a tiny hut and veranda. I stopped for a coffee and thought the veranda the most exposed situation I'd so far come across, with a view vertically down to the Rhine, and across to the little republic of Liechtenstein. The escape from the but and saddle was signposted — a cable led diagonally around the smooth buttress marking a line of chipped boot holds. Around the buttress the path reappeared swooping in and out of gullies on natural sloping ledge lines. The next three kilometres passed in seconds, the path a perfectly formed earth ribbon gently descending as it traversed the steep rocky hillside below the rocky crest before dropping sharply to a magnificent rock saddle at the junction of five paths the Saxer Lucke. To the right is the narrow defile of the dark green Falensee backed by the vicious looking Hundstein while ahead the route climbed ever so gently through scree floored valley below the quite striking Kreuzberge towers, five or six distinct fangs of gleaming white sheet limestone. 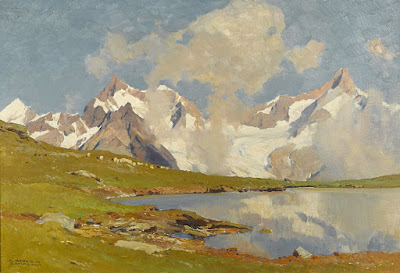 Easy climbing leads for two kilometres to a col at 2000m. Here all is pure white, either rock, scree or limestone slabs, such is all land above 200m in this little area, the Alstein. Turning right onto a short climb gave access to the Chreialp ridge and a three kilometre traverse through a seemingly impossible area of broken rock, cliffs and towers, but the path led through this high level chaos with virtually no rise or fall. Half way along a gentle drop led to the Zwinglipass before climbing slightly over and through the jagged summit towers of Altmann and a sharp drop to a saddle of red scree and red stone but on the Rotsteinpass. A bowl of goulash here and off I ran along a beautifully easy smooth rock path leading to the Lisengrat, a sharp ridge abutting the white rock pyramid of Santis, at 2500m, the highest lump of rock in the area. Once on the Lisengrat the path becomes a switchback of chimneys, ledges and cables as one dives in and out of towers of the vertically walled ridge. Suddenly it was over at a perfectly clean rock saddle below a 200m, easy angled slab leading to the summit of Santis. Downhill before me stretched the return leg of the journey, another ridge system containing the Altenalp towers and finally Ebenalp. First however the path descended a cliff by cables and cut steps to gain a steep little blue glacier, the Blauschnee, with an easy groove to follow across its slopes to reach the Rossegg valley, a gentle cwm of pure white scree.

The path through this lot had been carefully created by flour graders sifting the big lumps of scree from the path leaving only a perfect surface through this wilderness. Gentle downhill running led to a traverse through a hole in the Altenalp ridge after which the path followed the ridge system for three kilometres all the while descending gently as it wove in and out of crazy but solid limestone pinnacles and fangs. It took just three quarters of an hour to cover the most improbable piece of ground from the summit of Santis to the end of the ridge at the Schafler hut; nearly five kilometres of rock.A sharp grassy descent to a saddle led to a gentle ascent over the rocky but rounded Ebenalp, the rod covered in sweet smelling shrubs There is a cable car down frorr Ebenalp, but I chose to run down the remarkable descent route through the summit cliffs and so to my starting point at Schwende. 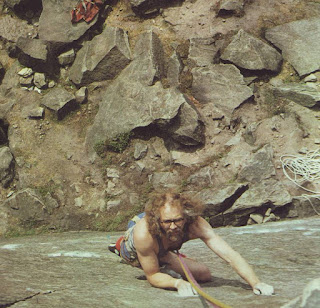 A grassy path leaves the summit heading ominously for the 200m cliffs surrounding the plateau, but disappears into a funnel shaped depression before the edge is reached. Steps lead down into an icy cool cave with daylight just filtering through from both ends. A long descent through the sizable cavern breaks out onto the cliff face at an alcove and ledge system into which is built a church. An airy traverse along the ledge leads to a but built beneath overhangs in the cliff face. A ladder from the but drops into the forest followed by three kilometres of delightful downhill work through dark forest and meadow into the valley at Schwende and the toy town trains. It had been a six hour dream of most intensive mountain experience in a landscape as near to fairy tale stuff as one could imagine. The route is of course real, from the Apenzell side of the Alpstein range in N.E. Switzerland. It could be done at walking speed in a day (guidebook time 15 hours) but most parties stop over at least once en route.