Coming Up: Tony Moulam's Angel Pavement and other stories 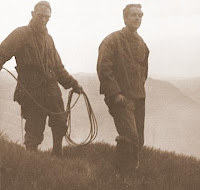 " Next day the rain really poured down and we climbed Central Ridge on Llechog, which despite being graded Difficult, struck us as being as hard as the climb of the previous day. In the morning the weather was better and three of us made our way to Castell Cidwm, by fording the ice-cold stream behind the hut. We attacked the cliff to the right of the gully, removing a lot of vegetation but not making much progress. Eventually we gave it best and Ken Pearson, the leader, descended with the protection of a peg, hammered in at his high point. We swam in the blue watered quarry pool and then, to warm up again soloed the gully and made our way over to Craig y Bera. The crag of the kite. It is a cliff of romantic ridges a little like Great Gable, but a jerrybuilt version and we remarked that there were no birds, probably scared away by the threat of the unseen predators. Here Johnnie Lowe had his eye on a possible new route and we quickly romped up a series of easy slabs, in four pitches. The overhanging wall defining the right edge of the slabs gradually encroached until we were forced onto the brink of a vertiginous sweep of vegetated rock which drew our eyes to a scruffy gully bed and the plentiful reddish scree beyond. Above us the slab tilted up and became a narrow wall, barely ten feet wide, giving little scope for choice of line. As Teddy and I huddled on a small ledge whilst Johnny addressed the problem the nagging wind grew stronger and the air colder, so we decided to abandon the project and descended what we had climbed, intending to return.'

This Friday; one of the great post war N Wales pioneers and creator of classic middle grade routes,Tony Moulam, writes about his very first North Wales first ascent. The wonderful 600' Hard Severe (US-5.7)Angel Pavement on the the buzzard haunted ramparts of Craig y Bera high above the Nantlle Pass. A previously unpublished piece written by Tony especially for Footless Crow.