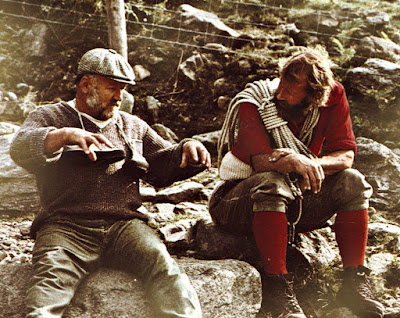 Original Photo: Adrian Bailey
Don Whillans took a firm grip on the undercut handholds, leaned out from the rock and sized the job up. The route was Dovedale Groove on Dove Crag, E1 5b. It is his route. On May 4 1953 (when Colonel John Hunt and his party were establishing their camps in the Western Cwm of Everest) Don and two mates from the Rock and Ice Club, Joe Brown and Don Cowan, parked their motor-bikes near Brotherswater, walked up to the crag and had a go. Don led the first pitch and Joe led the second and that was the job done. August 1984.

The intervening 31 years have brought a lot of changes  to the sport and to Don. When he made the first ascent he was 20 and weighed about 9-1/2 stone. At the age of 51 he admits to 14 stone and looks, if anything, heavier: 'My problem', he said, 'is going to be getting the paunch over the overhangs. That and not using up all my strength in the first bit. I was feeling quite confident on the way here but I'm not so sure now. It looks steeper when you get under it. I might have a struggle. Think it calls for a spot of market research'. He moved up and had another long look at the problem.

Dovedale Groove is one of those climbs where the hardest moves are at the start. There is a vertical wall, perhaps ten feet or so, with no footholds worth mentioning and not much in the way of handholds either. Don had never been back to look at the route — not even in 1960 when he came to the crag to create Extol — but he remembered one thing clearly: 'The crack higher up was easier than we expected. But this bottom part was a lot harder. I hung a sling on a little flake and stepped up in it — that did the trick. But the flake's gone now — you can see the bit of clean rock where it was. So we'll have to fix a sling in this crack somehow and I'll step up on that. It'll have to be a good 'un — a 14-stoner'. He experimented patiently.

He found a  pebble that lodged securely in the crack and adjusted the rope sling to a comfortable length. 'That'll probably do. If I can't do it with that, I can't do it at all. I'm definitely not going to attempt it without some aid'. He descended and scrambled up the easier rock to the left of the groove to study the handhold higher up: 'Christ! It's as round as a baby's bum'. For a man of such bulk he is still compact and surprisingly neat in all his movements. His feet and hands are small and he uses them deftly, with the maximum of precision and economy. Everything is worked out first.

He does not make hasty or clumsy movements — or statements. The Whillans style has not changed with the years. He uses short words and short sentences, sometimes enlivened by a vivid image, and the flat Lancashire delivery increases the effect of directness and confidence. There is no artifice, nothing phoney, no hint of self-doubt. He says what he thinks and when he has nothing to say he shuts up. With Don the style is very much the man, reflecting a unique and positive personality.

'I like to climb at a level where I feel comfortable and this is a couple of grades above that level'. So he was wearing P.A.s — he wore gym shoes on the first ascent — and he was not going to lead it this time. And he was not going to apologise for the fact that he used the aid of a sling when he first did it: 'When you're doing it for the first time, you do everything to conserve your energy. You don't know what's coming next — how hard it's going to be further up. So if you can fix a nice little leg-up, you do it — to save the strength in your hands and arms.

It's all right for those who come later. They can read all about it in the guidebook. They know what's coming. There was no guidebook to this crag in 1953 — there were only three or four routes on it'. On the first ascent they had a nylon rope that kinked badly and half a dozen nylon slings with karabiners with which they hoped to fix a few running belays. That was about it — no helmets, no harnesses, no nuts. On August 17 1984 Chris Bonington and Don were planning to use much the same gear — apart from Don's P.A.s — but in other respects things were very different. They did not even have to walk up to the crag. A helicopter dropped them 200 yards from the foot of the route, along with a small army of attendants.

Climbing for the cameras is slow work — that is why Don had so much time, too much, to study the crux and work out how he would tackle it. The whole thing was to be filmed as part of a series Chris is making for Channel Four about important Lake District climbs (others include Eagle Front and Footless Crow). Luckily, it was a warm day and the rock was bone dry. Finally, everyone was ready. The main camera rolled and Don and Chris walked the last few yards to the foot of the route, pretending to puff and blow a little, then they prepared for the climb and chatted about it. Chris — wearing tennis shoes — tied the nylon rope round his waist with a bowline in the old way and wrapped his nylon slings over his shoulder.

He selected a variety of pebbles and distributed them about his pockets. Don remembered that the rock had been dry on the first ascent and that the cracks had been crammed with gunge. He had had to do a lot of gardening. After the conversation piece there was a lengthy pause while the camera was unloaded and someone came over from the tents with sandwiches and cans of drink. Don, anxious to get cracking, bore it all with patience. The years have mellowed him. It is many years since he dobbed a policeman or any other uniformed interferer. And, after all, he was being paid for sitting around in the sun. So he kept control. When they were ready to resume shooting a voice came through on the walkie-talkies: `Is Don happy?' The reply was muted but loaded with the laconic impact for which he has become notorious: `You'll be lucky'. The cameras rolled, clapper-boards were clapped, the director called 'Action' and Chris moved up past Don, comfortably belayed, to confront the chief problem.

Chris is turned 50, only a year or so younger than Don, but he has kept himself trimmer. They both have beards now but Don's is the more grey and grizzled. They are very different in style and character and conditioning and they have not always seen eye to eye. But they have known each other for 27 years and they have climbed together a lot in the Alps and the Himalayas and there is a mutual respect and trust. Chris carefully fixed two pebble-slings in the crack and clipped the climbing rope into the karabiners. He did not intend to use the slings as footholds and somehow he managed without them. One big upward lunge and and the crux was conquered, unaided. `That first move is quite hard', he called down. Don had been amused to see one of the runners come out as Chris writhed above it: `I've already lost faith in your chock-stoning, 'cos it's come out, the bottom one'. But the higher one held firm and this was the one he would need for his sling foothold. 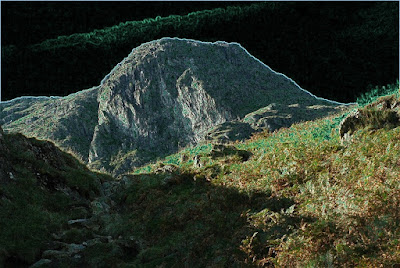 Keep the rope tight, Chris. I've got the hold — it's just a matter of heaving this paunch up. Give it the big heave'. And he was there — or, at least, on to slightly easier ground. `Jesus. I don't remember it being that hard. It's a real bollock-stretcher, that. When I tried to get my foot up I hit my belly with my knee'. Soon after, he joined Chris at the belay. The first, worst pitch was done. That was the end of the day's climbing. The helicopter pilot was reported to be worried about the immediate weather prospects so they would stop now and come back tomorrow or the day after to film the second pitch. They abseiled off and the chopper lifted them back in time for a jar or two before dinner.

Alan Hankinson: first published as 'Don does it again' in High-November 1984.

On 7 October 1952, my twentieth birthday, I climbed rock for the first time - with a rope, that is - on the Black Spout Pinnacle of Loc... 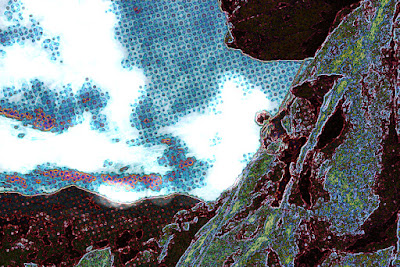