Coming Up: Harry Griffin on the early years of Lakeland skiing. 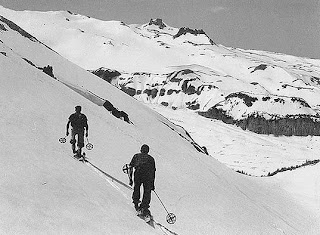 " We started skiing on Cairn Gorm long before the road was built when the only uphill traction was Bill Blackwood's old rope tow on the Ciste Mhairearaid side of the summit. Enjoyed fortnights in Austrian resorts for less than £40 — including the air fare — and, every year, had to learn some new style — the Arlberg crouch, maybe, the Christiania swing, the reverse shoulder technique, the new use of sticks and so on. Everything about skiing has been changing all the time. We first used long bamboo poles with enormous leather-thonged baskets — more useful for recovery from deep snow than the small metal discs of today — and bindings that included a strap across the toe and a coiled spring contraption at the heel allowing almost unlimited lift. This enabled us to attempt, almost kneeling on one ski, the elegant Telemark turn — usually disastrously. The first cable bindings came much later and modern release bindings later still. With cable bindings you could either have the heels held down on the skis — but not very efficiently — or free to lift for touring. Sometimes we used long leather thongs wound several times round the ankles but, if you fell the wrong way, these merely ensured that you broke bones or tore tendons. Before modern release bindings were invented the hospitals in the bigger towns nearest to the resorts abroad were filled with skiers with broken legs — scores of them in some hospitals with beds crammed into every corridor. Skis started as wooden planks which were then laminated with short sections of metal edges screwed on. These kept falling out and you had to carry a screwdriver and spare edges — then came metal and, finally, plastic. In the early days, if a ski came off, it zoomed down the slope, usually bringing down any skiers in its path or even threatening to decapitate them! '

This Friday,an article by the late Harry Griffin who takes us back to the 1930's and vividly describes the history of Lakeland mountain skiing from a first hand perspective and recalls his first faltering steps amongst the snow capped peaks of the north country.
Posted by Footless Crow at 09:05