Just give me enough rope ! 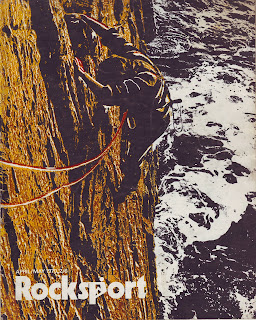 I just got a new rope, 60 metres of Singing Rock. It led me down the thinking path of handling ropes - if you will indulge me for just a moment. I really did not like my last rope at all, it was a dull gun metal grey colour but that was not really the problem. I just didn’t like the way it handled, there was something wrong with the way it felt, knotted  and smelt. I won’t reveal the brand, they might try to make me feel better by giving me another one – and I don’t want another one like that.

Actually, I am not that keen on my present rope because it is a 9.8mm rope. I just like the way that you can beautify a rock climb and make it so much safer using a couple of oddly coloured 9 mm ropes. But where I live they don’t do double ropes very often, it’s the influence of all of these sports climbs and bolts.

My nephew recently came over to the UK and got a couple of 8.7’s but I have yet to become really friendly with them. They are nice and long, 60 metres of lead, abseil or retreat, nice. But they are just a little thin on the hand, there is a strange, omnipresent feeling of danger in that mean thinness. The 9.8 is cool, it could double as a double if you know where I am coming from, but yet it is still just a little too thick for a double.

The last time I was ‘home’ my friend Martyn from Lowe Alpine met me in The Pass and we had a great day out on his double nines. I felt good on them. Nice knots, double ropes, double safety, long abseils off Dinas Mot. There was even fixed gear to rap off, with shackles and everything. Wasn’t like that in the distant past, more like a climb down.

The next day we did a wet Victorian classic on Tryfan up in the clouds and as there were three of us we used the doubles ‘guide’ style. Seconding the easy pitches with two people climbing at the same time on the two nines. And then my new rope took me back to thinking about my very first rope ever, 120 feet of gleaming white three ply hawser laid rope, sort of a proper rope. It quickly got dirty brown, then it went black and very furry very quickly. It was not very long, a 60’ retreat is not much of a retreat. But then I hate abseiling actually, probably because some of my best friends ended their lives in yellow Westland helicopters from stupid, dumb, unlucky or bad abseils. And yet these days everyone ‘raps’ with impunity. Must be these advanced Stitcht plates and modern ‘sit’ harnesses that don’t instantly emasculate males unless they carefully reorganise before descending. 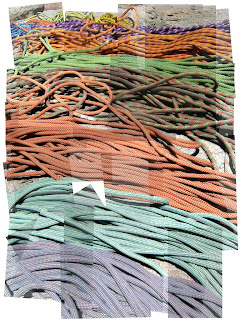 Thinking about 3 ply nylon reminds me of the particular smell of a hemp waistline. About 3/8 of an inch of hemp rope, wrapped around your waist about 10 times, knotted on each turn with a neatly tied reef knot and then secured to the rope with a massive steel screw gate finger trap of a Stubai karabiner. I had one for about 6 months before a better waist belt came along. I can’t even remember where the hemp went to, perhaps because we smoked it – would have used a lot of Rizla papers, it would have been a big one!

Then there was the red 11mm Edelrid. Again, about a 120 feet of lead (leading not lead) rope. It was standard issue up to about VS. Once they got a bit furry they were fine, sweet even and again the smell at the end of the day was sort of earthy and moss, evocative even. Grit made them furry real quick, but still good to handle, waist belays and all that. (hip belays to the cool).

Remember that advertisement in Rocksport Magazine? – that girl wrapped up in rope, they unwrapped a bit of rope each month, we couldn’t wait for December…. No you don’t remember. Perhaps you are too young, perhaps you smoked too many hemp waistlines. But eventually 11mm was a drag. Too heavy on harder routes, so along came the double nines. No traverse too long, no diagonal to oblique. They also made the photos come to life and the reward of a nicely laid out bit of pro made that aesthetic climb somehow come to much more life.

I love those nines, I really like Edelrid, I also really like Beal. They both knot really well and are really supple. I’m not sure about this Johnny come lately eastern European jobby that I just bought. But it was the right price, nice and long and my first one was horrid. It looked horrid on the rock, it knotted badly and it felt horrid on my hands.I wasn’t bothered when it snagged and nicked. I was glad to get it retired.

Now, about those dreaded rope bags. In the past when car boots were full of greasy ‘spares’ usually covered in oil there was a place for them. But these days, the boots of cars are so well appointed that deep pile carpet seems to be the order of the day. Modern car boots are much cleaner and better than some of the student digs we used to live in. And if a rope can’t lay on the ground for a few minutes there must be something wrong with it. Rope bags are for somewhere else.

The ritual of coiling and uncoiling (should that be the other way around?) ropes is part of the process of setting up for a climb, sorting the gear, subliminally running safety checks. Handling the rope, making sure it is good all the way along it’s length. It’s the same as the ritual of coiling the rope at the top. Standing there, looking at the view if there is one, reviewing and remembering the climb, having a laugh with a mate about the climb, sorting the gear and so on. Please stand back from the edge though.

Again, I like the process of coiling the rope and doing up the knotted bit at the end. It is completion and closure. The rope ends up neat and contained. Not like those doubled across the shoulders and through the middle businesses. I just like to coil and uncoil the rope at the start and the end of a climb. I like to feel them and check them – and is that such a bad thing really? 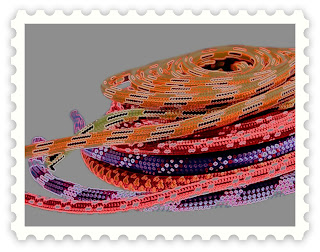 Although these days coiling sixty metres of rope makes my arms ache. Is it that 45 metres of nine mill was easier to coil? Nope, 9.8 is that bit heavier, either that or I’m just getting older.