Coming up: Ken Latham goes walkabout amongst his fields of dreams 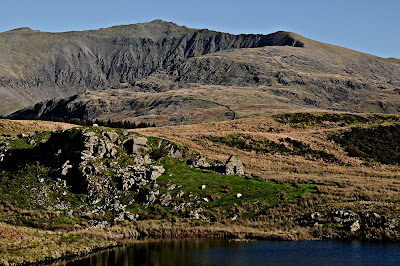 "I put the bitter memories away and turned from Bob’s memorial stone to catch the light mirrored off the waters and leading my eye to the summit of Snowdon, sharp and clear on this day. Faye was sitting on a small knoll eating an apple, her jet black hair throwing highlights as the sun caught a glimpse of her face as she turned. I could only think of my mother who would have come here with her father in very similar circumstances as us, to enjoy a walk and take in the surroundings as her father tended his stock. As I returned to my haunts of so many years, tending the flock as a child, walking, climbing, taking pictures. When I was here in the heady days of the early 60’s I never thought that I would return with my own child in tow and wondered silently whether it was as magical for her as it was for me?

Eventually the fisherman rowed over to a sheltered little rocky outcrop that acted as a natural anchorage to speak to us. It was the exact spot that my grandfather and I had tied our boat up all those years ago. It was then that we found that he had known my mother really well and it was from him that I had purchased a box full of old climbing guides many years back, small world even in such a big open space.
The dwindling warmth of the day set us on our homeward journey and we began to retrace our steps along the “cob” with the fading light throwing huge shadows over the lake as the sun dipped behind Y Garn and dropped into the bay behind the hills.'

Ken Latham was born in the shadow of Yr Wyddfa and spent his years of innocence exploring every rise and fall of the mountain's rough flank. When his family moved to Liverpool, Ken retained his love of mountain life and eventually became a talented member of the Liverpool scene of climbers which included legendary names like Al Rouse and Pete Minks. Since returning to north Wales, the author has picked up where he left off and has continued to wander far and wide across his old stomping grounds. In 'A short walk back to childhood', Ken describes returning to his old haunts with one of his daughters and looking back half a century on. A perspective which sees old ghosts gently raised and old haunts brought back to life.