Here there be dragons: The Long Hope Climb review 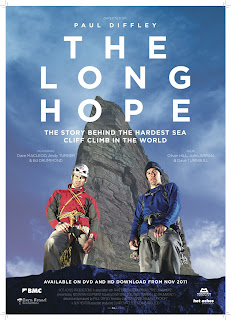 And so it begins...It is 1970,  'the greatest decade the world has ever witnessed has ended and we have patently failed to paint it black'. Ed Drummond  who was busy making a name for himself with daring ascents in Avon and Wales, had persuaded fellow Bristol graduate Oliver Hill to join him on a climb which would cement his reputation as a pioneer par excellence. The destination-St John's Head on the wind wracked edge of Orkney.

A cliff which the pioneers described as 'like the prow of the SS Great Britain', cutting through the Atlantic breakers. The 500 metre route would take the challenge of the prow head on. Deviously twisting through loose, overhanging terrain with the added insecurity-weather issues aside- of puking fulmers disgorging their foul brew in the direction of any passing creature !

The ascent has 'epic' carved deeply into the blood red stone. Drummond and Hill's ascent over several days was unheard of at the time. A route of Alpine proportions involving technical climbing at the cutting edge of the era. Although it was a mixed aid route-the climb involved free climbing at up to E5 standard- given it's location and lack of escape or rescue potential, the climb became the stuff of nightmares for its ascentionists. Writing of the ascent, Ed Drummond described being visited by demons and ghosts as he climbed through fear and fatigue. Nearing the end of the route-and his sanity- he describes retreating in terror from one of the penultimate pitches and being assailed by an almost physical malevolent presence.   " Who are you..what do you want from me?'

At this stage he asked himself 'am I committing climbing suicide?'. For his dogged partner Oliver Hill... ' I was there to prussik up the rope and take out the pegs'... it would take the wind out of his climbing sails for several years,such was the psychological impact. Twenty seven years later,the route was freed - by English climbers John Arran and Dave Turnbull. 'Freed'...well not exactly for Arran and Turnbull took a sideline which avoided the crux and which Hill,with an uncanny photographic memory-had detailed in a pin point topo which he had sent to the 97 team.

Thirteen years on and enter Scotland's golden boy and possibly the UK's greatest all round climber Dave Macleod with trusty sidekick Andy Turner reprising the Oliver Hill role. Unlike the Drummond/Hill and Arran/Turnbull ascents which relied on grainy out of focus self taken shots and wobbly cine8 images to record the occasion, the Macleod/Turner team had  in harness the formidable creative unit that is the Hot Aches Crew who with acclaimed photographer Lucasz Warzecha, set out to record the event. An event which has evolved into the much anticipated latest Hot Aches flic..The Long Hope. A film which will receive it's world premier at the Kendal Mountaineering Festival this week.

The climb itself has been discussed at length in the climbing media so no need to give a blow by blow account of the climb itself. However,to get straight to the heart of the film itself, I have to say from the outset that the work is a stunning success ! Like the previously acclaimed Hot Aches production The Pinnacle- which featured the same Macleod/Turner team in their assault on the Marshall/Smith winter routes from 'one memorable week' in the early sixties- The Long Hope succeeds, not because of the drama of Dave Macleod pushing the envelope to the limit, Although there is plenty of sweaty palm moments throughout the sixty minutes running time. It works so well because it is so intelligently structured. Interspersing historical footage,stills,
interviews and narrative with contemporary events.

Rather than getting the Drummond/ Hill stuff out of the way and concentrating on Dave Mac flexing his abs on the 2011 route- Ed Drummond especially, is an engaging and overarching presence throughout the film.And so he should be of course, because after all, The Long Hope was his created from his raw ambition and vision. Albeit at times a demonic vision.

The contrast between Ed Drummond and Dave Macleod is a fascinating one indeed. Very much a case of Ed Drummond being the dark Yin to Dave Mac's  lighter yang. Drummond the wild performance poet,crouched simian like atop a scaffold tower.
Hurling obscure poetic visions at his perplexed and frightened audience. The political activist and idealist who saw his life fall apart in the 1980's. Recorded in gruesome detail in a BBC documentary.

Dave Macleod by contrast is very much the modern rock athlete. A man of steely single minded determination. Dedicated,committed and every inch a lean mean climbing machine. He may not go around saying 'my body is a temple' but it clearly is!  However, he is also a man who comes across as affable and approachable.
Someone the average climber could well imagine sharing a pint and an anecdote with in the Clachaig.

On the route itself,Dave offers the following information for those who fancy a crack at the route. 'You have to climb totally on balance. You can't afford to pull up on the holds' such is their fragility. The final crux pitches are totally compelling in their intensity. Like an all action film hero who just comes out gun blazing,Mac just ploughs on,and on,and on... with each move appearing ever more tenuous than the last. 'Surely not..how can he do that..he must be off..no...what the !!!

For the average climber gripping the edge of their seat, this is the stuff of dreams...and nightmares! The stream of expletives rattles out like machine gun fire as the bold Scot powers up the mind blowing face with the rasping waves far below. Simply watching this section is exhausting!

Graciously, Dave Macleod never falters in his praise for Drummond who with the rudimentary gear of the time and climbing into the unknown, achieved something equally magnificent. In truth the wild poet has mellowed these days into a wise and philosophical sage. Physically burdened by Parkinson disease since it was diagnosed in 1993. Drummond came over during the filming to be interviewed and come to terms with the climb which had nearly broken him physically and mentally.

In one poignant scene,he returns to a stone pillar above St John's Head and carefully scrapes away the luxuriant green lichen which had taken hold, Revealing the initials ED and OH carved into the stone 40 years ago. Despite the vicissitudes of a life lived less ordinary, Ed reveals he can only feel blessed as the days grow shorter,for the extraordinary experiences and relationships he has enjoyed in his extraordinary life For Dave Macleod..and Andy Turner...new horizons still beckon.

As I write,the film has yet to hit the mountaineering film festivals or gain general release. I can only reaffirm,this is a brilliant and imaginative piece of work which I feel may well be seen as something of a classic within the genre in future years. Enjoy...but make sure you have some finger nails to gnaw on first!

Extras include... Return to the Indian Face: 50 years in the mountains: Mucklehouse Wall: The Old Man of Hoy.

The Long Hope is soon to be available from Hot Aches