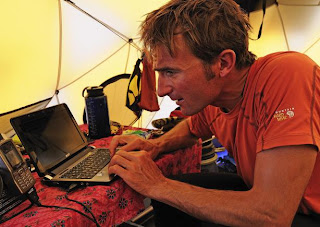 The North Wall of the Eiger is a supreme mountaineering challenge. Its history is wildly dramatic, full of adventure and tragedy. From the earliest attempts by German and Austrian climbers in the 1930s, the best of each generation of climbers has taken on the Eiger’s fearsome rockfall and shadowy reputation to make their own mark. Two of the world’s most famous Eiger climbers, Sir Chris Bonington and Swiss legend Ueli Steck, will tell of their encounters with the Eiger in a unique lecture evening at the Royal Geographic Society to raise funds for the Mountain Heritage Trust.

The Event
The lecture will be held in the Ondjaate Theatre at the Royal Geographical Society on Thursday 1st December 2011 at 7pm followed by a private dinner at the Polish Club, 55 Exhibition Road, London SW7 2PN, just 150m from the theatre.
Tickets for the lecture: £25.00
Tickets for the dinner to 'Friends of MHT': £50.00 to include pre-dinner champagne, a three course dinner with wine and coffee. Tables of 10 can be organised in advance on request.

To book the dinner, please contact Maxine Willett, Archivist of the Mountain Heritage Trust, on: 01768 840911 or email
maxine@mountain-heritage.org

Who are the Mountain Heritage Trust ?

The Mountain Heritage Trust (MHT) was called into being in 2000 to preserve the outstanding heritage and history of British climbing and mountaineering. To date we hold an impressive and growing collection of papers, photographs, archive documents, artefacts and film which includes the Chris Bonington archive; the Alfred Gregory collection (Everest 1953); the Simon Yates collection and the papers of Joe Tasker who disappeared with Peter Boardman on Everest in 1982. We also own, amongst other items, the oxygen apparatus used by Dougal Haston when he and Doug Scott became the first Britons to stand on the summit of Everest in 1975 and the Chouinard ice hammer used by Yvon Chouinard himself when he made the direct ascent of the Diamond Couloir on Mount Kenya in 1974.