Coming Up: Harold Drasdo goes beyond the madding crowd 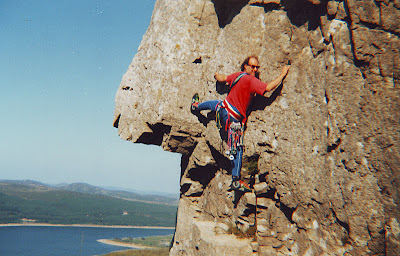 John Appleby on the first recorded route on the north side of Arenig Fawr-Rapscallion in July 1990.

"Climbing on Simdde Ddu, two sensations have contended in me. First, a time warp has shifted me a century back to the beginnings of the sport. The thread of path along the base of the east face looks like the work of sheep. We've seen no trace of litter, no print of boot. Sitting on a ledge in the amphitheatre on a rainy day, the curtain of water from the overhangs falls well clear of us, it was easy to imagine Owen Glynn Jones scrambling wetly up to join us. The ledge on the top of the Trojan Horse so delighted us that, idiots, we built a small cairn there. It will have to be dismantled. Against this, there's been the con­viction that countless climbers have laid hands on the crag. A peg in the zigzag crack — surely a Listed Piton until the explorer steps forward? — stated a case. There was something that looked like a threaded sling in a difficult position on the steep little dome down by the stream. The cliff felt haunted. Surely this groove ought to hold a clump or two of heather; this scar might show where a climber removed a loose flake; the holds on this slab come too obviously to hand; these stones, overgrown by heather, might once have been a cairn.
This is a detective story. We'd had some great days but now I wanted information. Charles Evans, I'm told, started scrambling around here and developed agility by evading Welsh Black bulls, not in evidence nowadays, on the lower slopes. In 1960 Pyatt listed unexplored cliffs on the hill yet in 1962 Poucher said that Simdde Ddu is'the occasional resort of the rock-climber'. Which rock-climber? I couldn't ask Poucher now'

This Friday...one of Arenig Fawr's pioneer new routers,Harold Drasdo,undertakes a bit of detective work to uncover the mountains' lost climbing history and its unique place in British art.
Posted by Footless Crow at 09:06