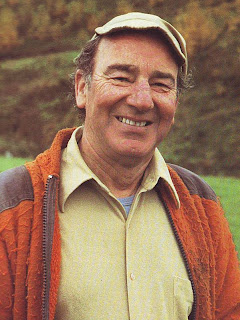 "The following week Border Buttress (HS) and 'Eagle Girdle' (VS) were put up. Then on 23rd June one of Lakeland's great routes was produced. 'Eagle Front' (VS), five hundred feet, forced its way up the main buttress. It was the best and hardest climb in Buttermere at that time, and it remains a superb climb today.
Only four weeks later Peascod was back again, accompanied, as on the preceding climb, by S. B. Beck. They climbed the main buttress again by a very serious route named 'Fifth Avenue' (320 feet). It is graded VS in the guide but I think HVS is the more appropriate grade. The crux pitch involves a 150-foot run-out of rope; it is hard, and the holds are sloping, a thoroughly frighten­ing piece of climbing. When Bill led it, he was climbing into the unknown, with no protection and on belays that were hopelessly inadequate. This was certainly one of the most impressive Lake District leads. He was only twenty years old at the time, and many fruitful years lay ahead.'


This Friday, Celebrated Lakeland writer and photographer, Bill Birkett writes about one of the great Cumbrian pioneers-Bill Peascod. The article was written just before Bill Peascod died-ironically for a Lakeland legend,on THE great Welsh cliff Clogwyn Du Arddu (Cloggy)- where he was climbing with Don Whillans and Bill Birkett himself. Surprisingly,although 2010 marked the 25th anniversary of Bill Peascod's death,the occasion appears to have been missed by the UK climbing media. Somewhat belatedly and in tribute to this surprisingly unappreciated pioneer, Bill Birkett's biographical piece offers a concise account of Peascod's life and times up until his premature death in 1985. In the mid 1980's just before his death, Border Television put out a television series presented by Chris Bonington-Lakeland Rock. One of these programmes featured Bill climbing his classic route Eagle Front with Chris.The DVD of this series is still available and well worth seeking out. Check out the Striding Edge site or Amazon for further details.
Posted by Footless Crow at 09:55