Coming Up: Tales of derring-do in the Lakes. 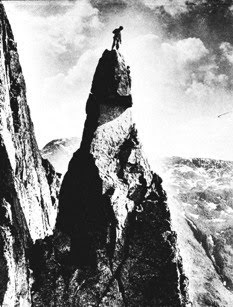 This Friday The Crow flies back 100 years to the English Lake District and recalls a contemporary epic first ascent.

The period around the closing of the Victorian era and the dawning of the 20th century was something of a golden age in UK Climbing. In the English Lake District, figures like O G Jones, The Abraham Brothers, Haskett-Smith and Siegfried Herford had left the gully epoch behind and had moved out onto the mountain faces, creating routes which are still considered classics to this day. In Wales, figures like Archer Thomson, George Leigh Mallory and Geoffrey Winthrop-Young were equally creative.

However, in the early years of the Edwardian era it was the activists in the north country who held the advantage over their Welsh counterparts, creating routes which technically had the edge. Friday's article describes one such route.


Photo: Napes' Needle (The Abraham Brothers.) Courtesy of The Fell and Rock Club©