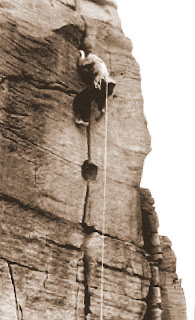 This Friday...a rare piece by someone who was at the heart of the UK's legendary Rock and Ice Club in the 1950's, Don Roscoe.

Don began his climbing career by exploring the northern outcrops around Manchester with school friends and a 'proper climber' whom he met down a copper mine.

Eventually he was invited to join the Rock and Ice club by non other than Don Whillans himself and the rest as they say is history. Still active on the rock face in his seventies and living in North Wales, Friday's article sees Don recall more innocent days.