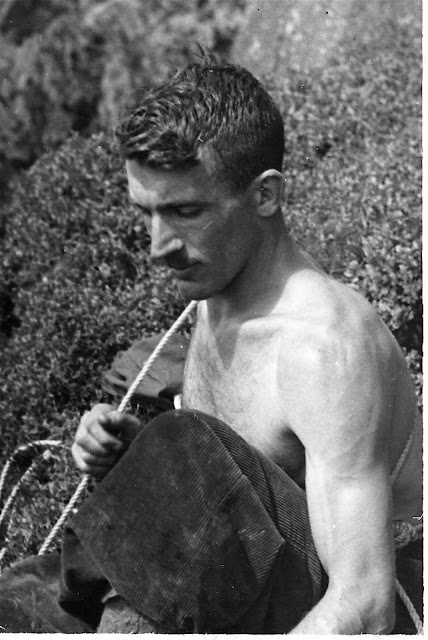 
It was in the Golden Rule, Cumbria's popular climbing pub, that two years ago and buzzed-out after climbing his Slab & Groove (VS 4c) on Scafell, I phoned Jim on a whim to tell him what a mega-effort his climb was. Considering that the route stood among the six hardest on the crag in the last Scafell guide to contain league tables of the climbs placed in order of difficulty, his reply was something of a surprise. "When Len (Muscroft) and I did the climb," Jim said, "we thought it was only severe. But thanks, Tony, you've made my day." "Thank you, Jim," I heard myself say. "And you nearly made mine." There via British Telecom glinted the steel of the man, minus any fuss or shouting the odds whatever. Jim was schooled in the hills as a boy by a well-meaning uncle who would take him hunting with a local fell pack. Gradually he realised there must be more to the hills than killing foxes. And the same thing happened with his enthusiastic birds-nesting. He even taught himself to abseil to collect eggs. But then he did an abrupt about-face and today is an active member of the RSPB, licensed to protect peregrines. Birds and the locating of rare plants are a great passion of the man, and his son Bill remembers many days spent on the hills from when he could first walk with a Dad patiently showing the boy the wonders of nature.

Like Ron Fawcett was to do, Jim did not begin making new climbs until he'd climbed all the hardest challenges going. These included —with the help of a number of trusty motor bikes to drive him from the Lakes Diagonal on Dinas Mot, Raven's Gully in Glencoe and Central Buttress on Scafell. This he did in nails to make the second ascent so shod, the first having been done by Menlove Edwards in 1931 (and Arthur Dolphin was later to take a flier endeavouring to do the same). As Jim says: "It was a point of honour to try the hardest routes in nails". Together with pals like Len Muscroft, Vince Veevers, Charlie Wilson and Tom Hill he began producing his vintage climbs in 1937 when he was 22. And, sorry Jim, but what greats they are! They are surely epitomised by Overhanging Bastion, the ascent lauded by The Manchester Guardian, and flashed on that first ascent with the super-cool of a natural matured before his time by those solitary escapades where he'd find bits of snakes — and once a dead cat — in the dizzily sited eyries of buzzards and eagles. He'd had a shaky start when he placed three pegs on Mayday (HVS 5b) the year previously. "It was a big mistake," he says. "I was a bit over-awed by the occasion." But he quickly learned and never repeated the mistake again. His forte was crack lines until then thought unjustifiable. "F Route on Gimmer had a hell of a reputation," he remember. "Yet when Vic (Vince Veevers) and I did it we couldn't see what the fuss had been about."

There were downers of course. The lines eventually to become Gimmer String, Poacher, Sidewalk and Extol were all tried and backed down from when "things got a bit out of hand." Jim's shot at Central Pillar on Esk ended with Great Central Route (VS 5a) rather than the projected dream - though Jim did launch out on the upper wall with a long probe before giving it best. And, no, Jim didn't take it hard when Jim Haggas had pipped him to the post on Gordian Knot (VS 4c) on what was to become Jim's. preserve, White Ghyll. "I was glad for him! Jim (Haggas) put up two great climbs, what with Gordian and Hangover (Dove) but he was never the neatest climber to watch. He went blinding out from the overhanging corner on Gordian Knot in a way I could never have done. But he got up! I managed to break off a bit of loose rock and climb it more directly and I'd think a bit more easily." "Hell, no!" Jim Birkett could not have been more definite. It was his reaction to anything appearing in print that might make him look big headed. And my musing on the lines of A GREAT CLIMBER IMMORTALISED FOREVER BY HIS ROCK CLIMBS was quickly melted down. But I persisted, surely he was proud of routes like Haste Not, Slab & Groove, Leopard's Crawl, Mayday cracks, Do Not and Harlot's Face just to mention a few of the classic Lakeland rock climbs he so ably created in the immediate pre- and post-war years and which make such an outstanding contribution to British climbing? Well, yes he said. He was. But he didn't want anything appearing even remotely over the top. Jim is the essence of modesty while appearing still at the age of 71 as a hard man indeed and in every way that is admirable. He has allowed hardly anybody ever to interview him and his dislike of the ostentatious and loud comes through clearly. He is essentially a man who lets his climbs do the talking.

"Anyway," he said. "The routes are good ones and I had a lot of fun climbing them but to make them out as masterpieces would be going a bit far. I mean, it would only take a small earthquake to wipe them out." As happened to Sepulchre, the Kern Knotts route — and one of his favourites — which suffered after an earth tremor? Yes, agreed Jim, but no he didn't follow when I mentioned that the smell of gunpower persisted around the crag for weeks afterwards. Had he never smelt it before during his time in slate quarries when large rockfalls emitted a sulphury smell? "I'll tell you what, mate," he said, laughing. "You're wasting your time at that typewriter. With a nose like yours you could earn a fortune with the Drugs Squad." When Jim Birkett laughs his love for life comes through. Of a statesman-like mien, you can quite believe he worked his way up from being a reiver in slate quarries from the age of 14 — when he left Little Langdale school — to becoming a quarry manager. You can also easily understand the directness with which he faced down crags in nailed boots and with frail ropes and produced such great climbs. Indeed, once watching a bold youth soloing Cracked Actor (E2) on Trowbarrow Quarry while wearing a weighted diving belt, my partner said at the time "Jim Birkett was doing that kind of thing years ago!" Jim is fully aware that modern gear and the protection it affords is light years on from his tricounis, clinkers, pumps and "ploughcord" rope. I'd heard that when somebody had told him recently that I'd done one of his best routes he'd said: "If Tony Greenbank is leading F Route (Gimmer) I'm starting climbing again." 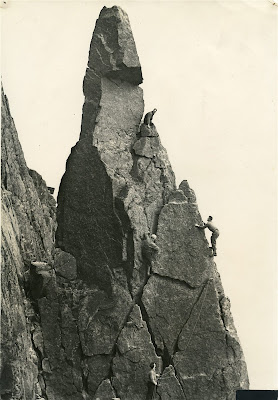 
Never were truer words spoken. The comment says it all. As the first Lakeland climber to climb really hard, Jim did it with negligible protection, rarely using runners of any description and cranking up those heavy boots on a number of his first ascents. Like on the excellent Square Chimney (VS 4c) on Esk. In all he created over 60 new climbs, though for some reason only 45 are recorded today. And while he climbed in pumps for some of the harder ones like Do Not and Harlot's Face, the first Lakeland extreme, the absolute golden rule, was not to fall off, pumps or no pumps:

"The fun and sheer enjoyment I've had from climbing is everything," he told me. "I wouldn't exchange that pleasure I've had for anything. Cameras? I never needed one. I can remember every priceless moment." And then comes the glimpse of heavy metal again and this time told by his son, Bill. He had broken down in Preston on a wild winter's night last and plaintively rung his Dad in Little Langdale to come and rescue him. "I'm too old," said the admirable Birkett Senior, after hearing him out, then breaking the connection.