The Decline of Tremadoc 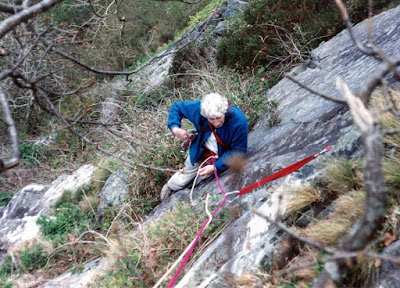 Harold Drasdo on an obscure and rarely ascended Tremadog VS 'Wanda'. Look out for Adders if you ever fancy having a go at this slice of Tremadog esoterica!

"Dismantle Milestone Buttress stone by stone, and rebuild it in the Pass, and you could blow up the rest of Tremadoc for all the good it is.". So spoke Pete Crew. Strange words, especially as more people climb there than ever before. Does not this popularity make Crew's words paradoxical to say the least? How is it possible to speak of "the decline" of a climbing area when the latest guide to it states that it is no longer a bad weather alternative, but an important centre in its own right? Every period in the development of Welsh rock climbing has featured certain crags as the venues for its greatest achievements, as a barometer of its whole conception of high standard climbing. For a brief period Tremadoc came near to fulfilling such a role, and perhaps it actually occupied such a position in the years at the end of the 1950s; between what has been called the 'Brown Era' and the more modern period that began in 1961 on Clogwyn dur Arddu. During those few years most of the hardest routes were climbed, and everyone wanted to know about Snowdon South. Today the barometer has certainly moved elsewhere, back to the big high cliffs, and to the area that may become Wales's next major bad weather centre, the sea cliffs of Anglesey.

There are some interesting reasons for the decline in status that Tremadoc has suffered. First an obvious one—there are not many good routes there. Some people have prophesied a trend away from majesty of line, and towards concern with technical detail, as the next stage of Welsh climbing. So far they have been wrong. Advanced technique has been used to open up better lines. Look at three of the technically most difficult routes in the' new Llanberis South guide "Beorn", "The Great Buttress" and "Nexus"; all great climbs up really impressive `weaknesses'. In fact it is at Tremadoc that the difficult, but less worthy, additions seem to have been made. Also, there has been a social revolution in Welsh climbing. Greater prosperity for young people has made motor transport accessible to thousands of climbers who previously had to be content with local outcrops at weekends. This has made 'weekending' in Wales regular instead of exceptional—but there have been less obvious changes, towards which the peculiar characteristics of Tremadoc have contributed. The aura of impregnability that surrounded the hard routes of the 1950s has often been described, but the role played by Tremadoc climbing in undermining these myths, is not so well known.

The discovery of the area's possibilities helped to make Welsh climbing an all-the-year-round affair. It became worth going up to Wales on a winter weekend (as well as possible). Routes could be done even if rain blanketed Llanberis. It was inevitable that the hard routes in Snowdon South, should provide the first introduction to high standard Welsh climbing for many of the outcrop-trained newcomers. (The North side of Llanberis Pass of course played a similar role). What's more the short, sunny, accessible and well-protected Tremadoc climbs provided an exceptionally homely and unexacting introduction. As late as 1964 it was possible to do early ascents of routes on high crags that were technically much easier than the hard problems in Snowdon South, which had already become standard routes. There were plenty of 'myths' of course, even at Tremadoc, in these `early' days, but they were myths that crumbled fast. Climbs seemed to hold their reputations for a year at most, and only routes of really stupendous quality such as 'Vector' survived this process of devaluation. 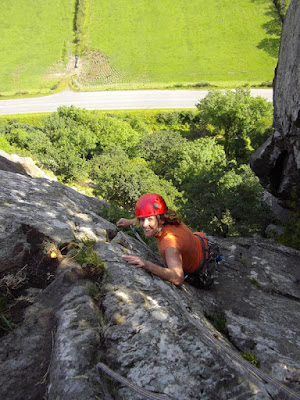 Maggie Reenan climbing at Tremadog for a TV special. See linked interview below.

By 1964 Tremadoc has done its work well. The floodgates were open. A new wave of high standard climbing swept the big cliffs, and achievements by the sea just didn't seem to matter any more. Last summer a party did "Red Slab", "Troach" and "Shrike" in one day. Three years ago this would have been a good summer's ambition for most climbers. Most Welsh regulars will probably agree with Crew's debunking statement with which the article began. It may seem a little unfair to be so hard on the training ground that has played so important a part in making the big routes much more accessible,but the other side of the coin to the 'decline of Tremadog' is the enjoyment of really great routes by more and more climbers.