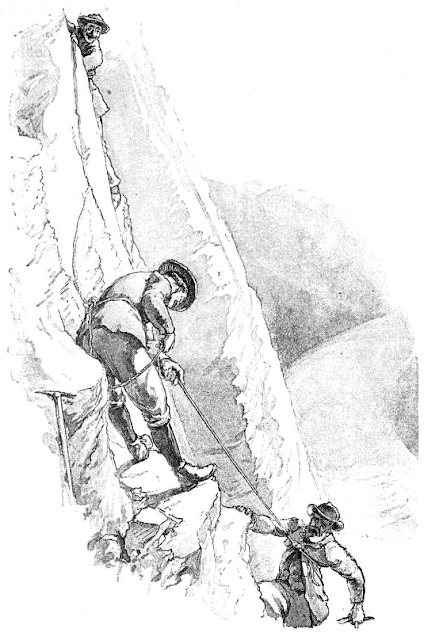 DURING the second half of the last century British mountaineering boasted several remarkable families whose exploits have gone down in history. The Walkers, the Matthews, the Pilkingtons—these, and others less well known, helped to found the sport in Britain and the Alps. Of all these families, none has a more remarkable story than the five Hopkinson brothers from Manchester. Their father was a mill mechanic who by hard work and flair rose to become Mayor of his city and an Alderman. Their mother was one of the Yorkshire Dewhursts, related to the Slingsbys and Tribes, and mountain walking was a long tradition on both sides. The young Hopkinsons grew up with an intimate knowledge of the Yorkshire dales and the Lakeland fells. Often they were accompanied by their cousins, W. C. Slingsby and W. N. Tribe, so it is little wonder that they soon became involved in the new sport of rock-climbing.

The eldest of the five was John (1849-98) then came Alfred (1851-1939), Charles (1854-1920), Edward (1859-1921), and Albert (1863-1949). Perhaps because he was the eldest, perhaps because he was a genius, John was always looked up to by the others; but in fact each and every one of this remarkable family was talented in the extreme. Quite apart from their climbing, it is worth while to glance at their careers so as to appreciate more fully the intellectual stature of these men. John was a consulting engineer with a brilliant academic career—Senior Wrangler at Cambridge, Doctor of Science of London, Fellow of the Royal Society, twice President of the Institute of Electrical Engineers. He was one of the founders of modern electrical engineering, perhaps best known to the public as the man who built Liverpool's famous tram system. Charles and Edward were also engineers and often worked with their brother. Edward it was who first introduced London to underground electric trains in 1890; the start of the modern tube system.

The other two brothers broke with the family tradition of engineering but both reached the top in their chosen professions. Sir Charles Hopkinson was lawyer, M.P., and Vice Chancellor of Manchester University. When he was elected Treasurer of Lincoln's Inn he had to adopt a crest and motto, so he consulted his other brothers as to what the motto should be. It is significant that they chose "Who shall separate us?" Youngest of all was Albert, who took medicine as his profession. He became a leading Manchester surgeon and eventually lecturer in Anatomy at Cambridge, because, he said, "Cambridge found it could not do without a Hopkinson"—a reference to the close ties the family had with the university. Details about the early climbs of the Hopkinsons are not easy to find, but they certainly descended the East Face of Tryfan in 1882, which is four years before Haskett Smith climbed the Napes Needle. However, their interest turned to the Alps, where, among other climbs, they made new routes on the Unterbachhorn and in the Fiisshorner. Their first major contribution to British rock-climbing came in 1887 when, in the September of that year, Charles, Edward and Albert Hopkinson, with W. N. Tribe, attempted to descend the steep face of Scafell Pinnacle.

They were stopped at a point about 250ft. from the screes, at a narrow ledge. At this point Edward Hopkinson erected a pile of stones. Hopkinsons' Cairn acted as a magnet to all the best climbers of the day. Attempt after attempt was made to reach the tantalising pile of stones from below. Charles himself led the first attempt in December of the same year but failed about 150ft. up, due to ice. In 1903 an attempt to reach the cairn caused the death of three climbers—the first major climbing accident in Britain. * The problem was not solved until 1912, when the incomparable Herford, climbing in stockinged feet, ran out 130ft. of rope on the crucial pitch. The Hopkinsons found an easier way to the top. By climbing Deep Ghyll they gained a wide rift which they called Professor's Chimney in honour of John. In 1888 a famous party attacked Scafell by way of Steep Ghyll. The leader was W. C. Slingsby and with him were Edward Hopkinson, W. P. Haskett Smith, and Geoffrey Hastings. At the foot of the great pitch of the gully they turned out onto the face and Slingsby, running out 110ft. of rope, climbed the chimney which now bears his name and which was to become one of the most popular climbs in the Lake District.

That same year Hastings led Great Gully on Dow Crag and Edward Hopkinson was with him once again. The gaunt buttresses of Dow must have appealed to him, for a few months later he returned with his brothers when they climbed the gully again, this time leading the first and most severe pitch direct. There is little doubt that the Hopkinsons must have put up many new climbs which went unrecorded and it is a fair criticism of them that they failed to appreciate the part they were playing in the formation of a new sport. In fact, their greatest 'discovery' was not recorded for three years; the northern face of Ben Nevis. In 1895, however, they reluctantly published a small paragraph in The Alpine Journal mentioning the fact that in 1892 they had enjoyed some interesting scrambles on the mountain. In fact, they had made the first ascent of the North East Buttress (though it is not known by what route) and the first descent of Tower Ridge. They had tried to climb Tower Ridge but were stopped by the Great Tower. There can be little doubt that it was the enthusiastic reports of the Hopkinsons to their climbing friends that led Norman Collie to make his visit in 1894, the start of real rock-climbing on the Scottish mainland. In 1895 the brothers revisited Dow Crag where they made the two climbs by which they are best known today. Edward and John, with a climber named Campbell made the first ascent of Intermediate Gully; a very strenuous and severe climb and on the same day Charles was leading Hopkinson's Crack, a tour de force which still ranks as one of the hardest severes in the district. 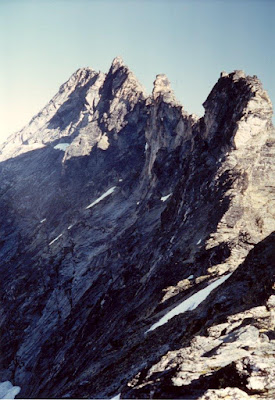 The Haunted Mountain: The Petite Dent de Veisivi where tragedy struck the family.

But in 1898 an overwhelming tragedy struck this brilliant family. The summer of that year saw John Hopkinson, with his wife, four sons and two daughters staying at Arolla in Switzerland. They did a number of the popular climbs, guideless, including the difficult Arolla face of the Za. On August 27th, the father, together with his son Jack, aged 18, and his two daughters aged 23 aid 19 set out to traverse the Petit Dent de Veisivi. When they did not return that evening a search party was organised and the next morning their bodies were discovered below the south face of the mountain. They had obviously fallen from a point near the top, but whether from a slip or through falling stones, it was impossible to tell. It remains to this day one of the most poignant of Alpine tragedies. The remaining four brothers rushed out at once to the scene of the disaster, but nothing they could do could lessen their grief. John, their favourite, was gone. They never climbed again. So ends the story of the brilliant Hopkinsons, and yet there is a pathetic little footnote—both of John's remaining two sons were killed in the Great War.