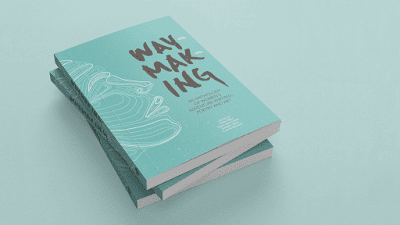 ‘For what is a play without a woman in it?’ Thomas Kyd.

Whatever else this book is about my first response on perusing a copy was how bold and innovative this appeared to be and the contents did not belie such a consideration. I had a thought though as I commenced reading, namely would women’s writing about outdoor adventures be different in a fundamental way to a male’s? And I soon decided as I read on, that the answer was YES! The author’s revealed themselves as more caring, less heroic in their claims for self, and gentler in their approach to life and all of its demands; relationships, family, children, and place. I will contradict myself here, for there is nothing gentle in Lily Diyu’s essay ‘Running on the roof of the world’, a seven-stage sky race set around Manaslu the world’s eighth highest mountain. But again there is perhaps less of the heroic within the story than if this had been written by a man?

In WAYMAKING the contents are broken down into four sections, under titles headed as follows, ‘Vicinity’ ‘Heart and Soul’ ‘Water’ and ‘Union’ and each of these contain essays, poems, and paintings/cartoons which more or less fit such headings. This is not however a feminine version of ‘The Games Climber’s Play’, an anthology of mountain themed writing, for it is much wider sourced than that. It does include some hard core climbing, but the range of content is probably wider than most other such compendiums.

The essays are so varied and cover so much ground physically, set in the Antarctic, Patagonia, Ireland, Nepal, Wales, Scotland, the Lake District, Australia, the Peak District, and many more such destinations. Most of the subjects covered are straightforward adventure activities; bouldering, swimming, canoeing in rivers and oceanic waters, urban running, peak bagging etc but a few are more challenging, and for instance ‘Leaving for the edge of the world’ by Kathleen Jones questions our consumer life styles, the pollution this is causing, and the damage to the natural landscapes. K’e yil yal tx’i; ‘Saying something’ by Leslie Hsu Oh is equally thoughtful, and anyone who has taken their own children climbing when young will understand the trials and tribulations one must face over this; their over enthusiasms, but on occasion lack of same, and the worries over safety, toileting and sustenance. This essay also has something to inform about how native USA people saw, and still see the rocks and mountains of their homeland. 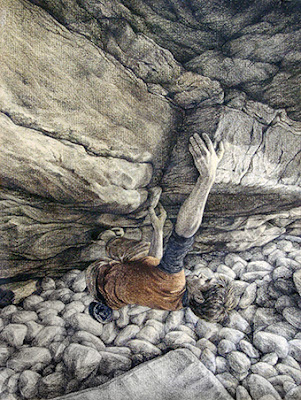 
The essay ‘Memory Ten’ by Libby Peter is set in more familiar territory, winter climbing in Snowdonia with her daughter, at that date a 13 year old, climbing Yr Wyddfa’s Trinity Face by its Central Gully. Despite earning her living as a mountain guide, you realise that with her own daughter the relationship is different to that of a client during such an ascent. Two other climber’s essays have unusual slants, Hazel Findlay in ‘No-self’ and Katie Ives ‘Unmapping’. The first is self analysis, and its author is well schooled academically in philosophy and psychology for such a mental challenge whilst the second author is a climbing journalist of stature writing about night climbing.

To anyone who has deliberately set forth as other climbers are descending at the end of the day, this will bring to recall memory of the excited anticipation tinged with apprehension that planning such climbs and trips can bring which quickly disperse once into moon or torch lit action. There are so many different topics covered in the other essays within this book, that it is not possible in this review to cover them all, but one I cannot ignore centres on the joy to be found in the simple pleasure of a continued observation of a brook that falls from high ground on the eastern edge of Dartmoor.

Illustrated by photographs and an accompanying essay ‘Counterflow’ by Jen Benson or ‘Lost in the Light’ of West Antarctica, sleeping in tents at minus 50F, melting snow for drinking water where daily living demands so much of Tara Kramer, who nevertheless feels so alive in such an environment. Whilst ‘Rewilding’ poses a different kind of scenario, but just as alive, describing a 550-mile self supporting mountain-bike time trial around Scotland’s most rugged and remote wilderness for Lee Craigie, but with an acknowledgement that despite the chasing and racing, it is something more than that which drives her to such physical demands, at the end of which the memories of the scenery passed through remain dominant and fast to recall. 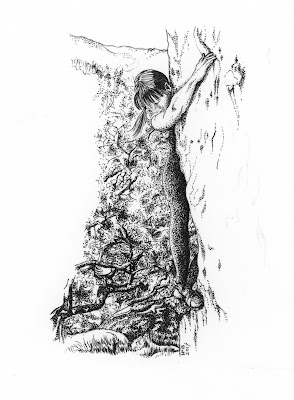 Climber: Hazel Barnard
So far in this review I have not written of the many and varied poems included in Waymaking or the paintings; poetry is such a personal like, but running throughout the book are a series on the Camino de Santiago by Cath Drake which have a resonance for this reader. ‘To Follow’ by Claire Carter and ‘Falling’ from Joanna Croston will be recognised as the truth by any climber as will a reading of Helen Mort’s contribution ‘The Climb’ of just how and when it begins! Other verses were more difficult for me, but some were rewarding at a second and third reading, typical of which was ‘Last night I dream we walk up to the Point again’ by Imogen Cassels, or ‘By the Way’ a crossing of Kinder and more by Sarah Outen. Publishers always declare there is no money in poetry (that is unless you were based in the old USSR where poetry outsold fiction, and Yevtushenko had the lifestyle to prove it!) so it was brave of Vertebrate to go along with a format where poetry has almost as much emphasis as essay.

The paintings/cartoons do add much to the feel of the work. Four paintings by Pam Williamson, illustrating her poem ‘Walking Moses Trod’ set the scene and why the artist wanted to capture it, whilst the line drawing of a ‘Climber’ by Hazel Barnard does look so real and ‘gripped’. My two favourite pictures however were the wash drawing; ‘Women who Run with the Wolves’ by Tessa Lyons and ‘Bouldering at Ardmair Beach’ by Deziree Wilson. There is humour as well in a series of paintings by Paula Flach of a young tyro taking on challenging situations and by some cartoons, which for me the most laughable was ‘Ken the Cross Dresser’ by Tami Knight. The hero of this is Ken, a one legged, cross dresser hoping to ride his bike to the summit of Mount Everest (without oxygen) but who is beaten to the summit by a more agile one legged lady biker. 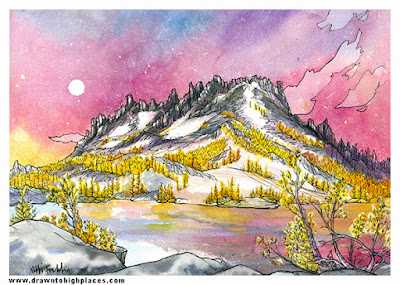 Enchantment Larches: Nikki Frumkin
The book ends with C.V’s of the 56 contributors who have essays and their pictorial work appearing in WAYMAKING. Only three or four of these were personally known to me, but what a galaxy of talent they represent? Writers, academics, poets, travellers, mountaineers, canoeists, bike riders etc many undertaking challenges and writing about them in way that any publisher would feel positive about presenting their work. We are informed that this volume of Women’s Adventure Writing would not have appeared with the support of Alpkit, but we are not let into the background story of what that was, but whatever it was we readers are grateful. Finally the book’s four editors are to be congratulated in assembling such an outstanding eclectic work; one that will bear dipping into again and again, a veritable cornucopia of interest expressing an enjoyment in living.