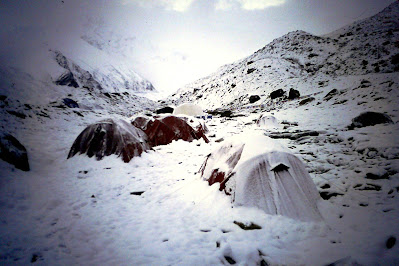 Idle thoughts from a tent in the Khumbu

Some years ago I was sitting in my tent high in the Khumbu Valley, snowflakes swirling through the bitterly cold air then noisily slithering down the flysheet; flimsy protection against the bitter elements. As we were unable to move that day I cast a few thoughts on this all too common occurrence for mountaineers. We partake in a sport which, by necessity, is exposed to the vagaries and often unpredictable elements which affect the weather wherever we happen to be. The mountains of the UK are of course exposed to the prevailing and often moist south westerly winds which generally brings a changeable weather pattern. Elsewhere in the world from the Alps to the greater ranges the general consensus is the bigger or more remote the hill – the more extremes of wind and cold should be expected.

The great debate, as a mountaineer, is to wait, or to go. A very difficult decision and, in the circumstances I found myself at the time, even more so. As leader on a Himalayan trip I had to make decisions not only for myself, but also for all the clients and the Sherpa staff. The safety of all was my responsibility

The decision has to be right, we live by the decisions we make - and make a decision to live by. To err on the side of caution is obviously correct but too much caution and we will not achieve. We must have adventure, and therefore risk, to be successful in the mountains.

Making an informed decision or judgement can become easier as you gain experience, however decisions will still be difficult as you become more aware of all the factors for consideration. If your decision to wait is because of danger to life and limb, then waiting must be the answer. However, if the adverse conditions are merely going to make things difficult, then the answer is a little less clear.

Consider now the words ‘awareness’, ‘judgement’ and ‘decision’. We supposedly gain more awareness as we grow older (or wiser)? Shouldn't this make it easier to make a judgement? The pressures on the professional are much greater because we are supposed to get things right! We make judgements for others often with no one to assist in the thought process. Where are the dangers? What is the avalanche potential? How bad will the weather be higher up? These are all questions that must be answered. In this I speak of the familiar problems facing professional mountaineers, instructors and guides, but we are a very small minority. There are many climbers out there who regularly climb in the Alps, Himalayas or even Scottish winter conditions. All, at some time or other subjected to the “Waiting Game”. How do you make your decisions? Experience, weather, avalanche potential, snow conditions or all that and perhaps a little “gut feeling”.

Experience is obviously important, but how do you get that experience in the first place? Through the school of hard knocks and learning from mistakes in formative years? Perhaps from an older, more experienced friend or on a course at an Outdoor Centre. Either of these methods of learning is valid, but it’s like learning to drive, you only start to build up experience and judgement when you’re on your own in the car with nobody there to help in case you make a mistake. There are numerous Scottish Winter and Alpine Courses to go on (if you can afford them) and also some excellent training Courses Jonathan Conville Trust. There comes a time however, when you're faced with a decision regarding a particular slope, anchor, or indeed the descent route in poor visibility. What happens then when there’s nobody to help in that potentially dangerous situation?

I well remember my first two routes on Ben Nevis in winter, one resulted in an eighty foot slide base over apex (that’s arse over tit in non-metric language), followed by an incorrectly executed, but nevertheless effective self-arrest! No one had shown me how to do it. I just did it! My second route resulted in a lucky descent down into Glen Nevis. Lucky because many have come down that way and not survived. Those two dangerous errors happened because at the time I was not aware. I was naive and did not understand big mountains but I soon learnt! My first few escapades in the Alps would make your hair stand on end (it did mine, literally)!

The basic skills learned from experienced friends or instructors are invaluable, then we must go and arm yourselves with the all-important experience. That way you begin to gain knowledge which helps you form a judgement and get that “gut feeling” that is so important. In that way we can transfer our skills and knowledge to bigger hills, and perhaps gain a little bit of knowledge and know whether to play the “Waiting Game” or not. You may not always get it right, I don’t now, after 50+ years, but at least I’m still trying. In many cases like that day sitting in a tent high in the Khumbu trying to salvage something before we were due back at Lukla. There were pressures that day from myself as well from the group, but then again they may have been imagined. 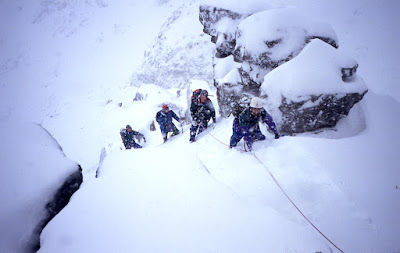 There are many other waiting games, that elusive Alpine or the Scottish Winter route which is not often in condition, for instance. Alpine routes especially, with the recent series of hot dry summers, many of the “Classic” mixed routes are now safer in winter. There will be more difficulties, short days, long, hopefully snowy approaches and an ability to ski, combined with a little lateral thinking to avoid the avalanche prone slopes. There are however several distinct advantages. Modern layer system winter clothing is far more effective at keeping you warm and the technical advances in crampons, axes and protection make a tremendous difference on those long adventurous run-outs. Settled weather and a good snow cover will make the route safer from stone fall but more prone to avalanche, but at least the route will be there, which is more than can be said for some of the Alpine North Faces of recent summers.

We should call this the “Tempting game” where you may be tempted to try a route when it's not in perfect “nick”, you have travelled a long way, not much holiday, cost you money to get there, your mates done it, etc.

The difficulty arises when you have to make decisions and conditions are not quite right. There may be doubts in your mind about the weather or fitness, or lack of confidence in your abilities. Conflicting thoughts which persuade you to have a go interspersed with nagging doubts and fears, but it's still your judgement. We all take a risk, that is what mountaineering is about, but we must make these acceptable with the odds in our favour. When everything has been considered, it’s still that “gut feeling” which is often relied on. Sometimes in your head and your heart you know you’ve overdone things, you know you shouldn’t be on a certain route or in a certain place, but (sometimes) you are lucky and you get away with it, vowing never to return. We’ve all done that if we are honest and admit it!

Taking falls on modern rock and mixed winter routes can be a non-serious affair, but what of traditional routes with minimal gear and much more to hit on the way down? An ascent of The Orion Face, Zero or Walker Spur calls for a much larger safety margin than some of the technically much harder routes. Perhaps then we must play the “Waiting Game” much better on these routes and not be tempted when conditions are not “right”. There is then, little difference between the professional and amateur mountaineer, we all play the ‘Waiting Game’ Tempting Game’ and hopefully the ‘Thinking Game, however as a professional you are expected to get things right much more so. 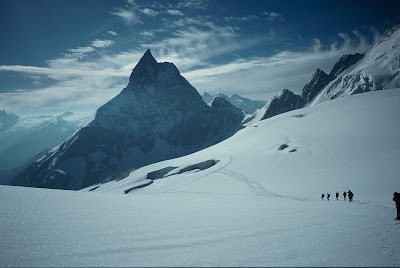 These original thoughts were my way of filling time and waiting for the next event of the day, yes, you got it right - a brew!

All images supplied by the author.