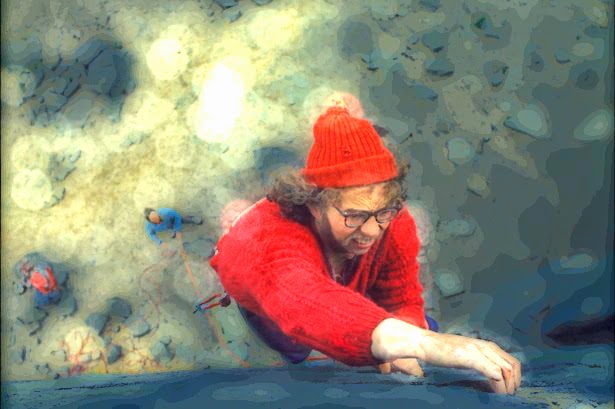 When I started climbing in earnest in about 1987, two names immediately sprang out of the new culture I was immersing myself in. Ron Fawcett and Pete Livesey. Sure other names peppered the rock notes in the climbing magazines...Moffatt, Moon, Dawes, Redhead et al...but despite the latter names being well on their way to legendary status themselves, Fawcett and Livesey were the real  Big Time Charlies. As something of a rock innocent in those days, I was not aware that Livesey had actually quit climbing some years before and was now heavily into orienteering. I also had no idea that he had once been a top drawer paddler-GB Olympic selectors had pencilled him in the GB Slalom Olympic Team- a leading caver and champion fell runner.

All I knew back in those early days was that he had an extremely entertaining column in Climber & Rambler magazine so I guessed  that he must still in the business of  putting up classic routes like Footless Crow, Das Capital and Mossdale Trip. In fact, hadn’t I just watched him climb Footless Crow with Chris Bonington in the Lakeland Rock series? It all seemed perfectly natural; Pete was still an active top rock athlete...wasn’t he?

With the publication of John Sheard and Mark Radtke’s ‘Fast and Free...Pete Livesey’ (Stories of a rock-climbing legend) those early misconceptions are answered and put into perspective. The complex ebullient Yorkshireman is revealed in his ragged glory. Fanatical, laid back, devious, accommodating, selfish, generous.  A  mish-mash of contradictions who nevertheless,was at heart a true climbing romantic who was drawn from the same traditional mould as a Kirkus, Edwards, Brown or Whillans. It is this ethical approach to climbing which makes his achievements all the more remarkable in light of the technicality of the routes he was putting up in his pomp. This statement will raise some eyebrows given his reputation for ofttimes cutting corners when prepping a new route or occasionally being less than pure in his style. However,many of these accusations it appears, were without foundation and emanate from figures in the climbing world who had an axe to grind with Livesey. The occasional ethical lapse notwithstanding,Livesey remains still a much more interesting individual than some of our modern day climbing  automatons who are high on ability and low on personality!

It is these contradictory elements of his character and that mischievous element which continues to attract people to the Livesey myth and which underpins the fascinating collection of essays within the book.  ‘Fast and Free’ might at first glance appear a Pete Livesey biography. It isn’t. What it is,is a well conceived and skillfully assembled collection of essays and articles relating to the man. Some of these pieces were written by Livesey himself and includes classic essays  like Travels with a Donkey, Jonathan Livingstone Steelfingers and the ‘I feel rock’ articles which appeared in magazines like Crags back in the seventies. The majority however, are written by Pete’s closest friends, partners and climbing associates. 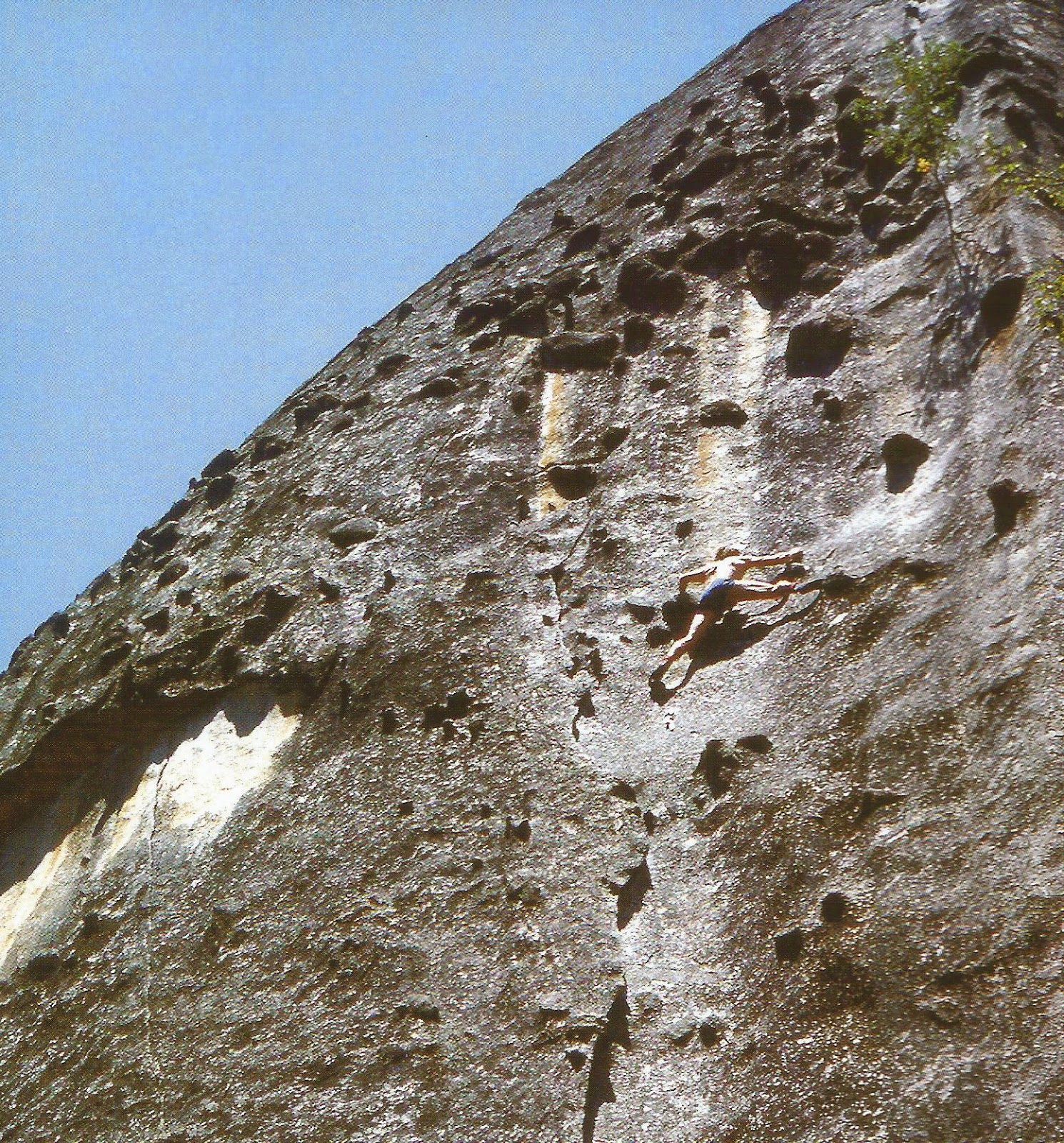 Whereas a conventional biography generally dissects it’s subject from cradle to grave-or if you are a modern celebrity, from cradle to early 20’s!- Fast and Free is purely concerned with Livesey the athlete. Essentially the rock athlete although his activity in other areas, particularly caving gets a mention. This leaves the field open to anyone who might feel motivated to write the definitive PL biography in the future, but until then, Fast and Free more than fulfils the authors ambition to bring Livesey, the mythical Rock God into sharp focus.

One thing which struck me from those early Climber and Rambler articles, was the fact that Pete was a fine natural writer. Not inclined towards dense philosophical ramblings or purple prose, Pete told it as it was, but more than often, with his tongue firmly planted in his cheek. One C&R article which springs to mind, pondered whether or not, fist jamming up a gritstone crack, you could become HIV positive if a previous ascendant was HIV themselves? The theory being of course, the climber would have deposited skin in the crack and the rasping  qualities of the rock could leave those following vulnerable. I’m sure climbing’s PC elements must have grimaced at these ponderings and I still don’t know whether he was being serious or if it was an early attempt at what we know today as trolling? Whatever it was, I found this and other similarly surreal articles a lot more entertaining than the often turgid writing on offer in the climbing mags in those days. Livesey’s  Climber & Rambler column continued into the 90’s . Long after he had hung up his chalk bag and dug out his running shoes. 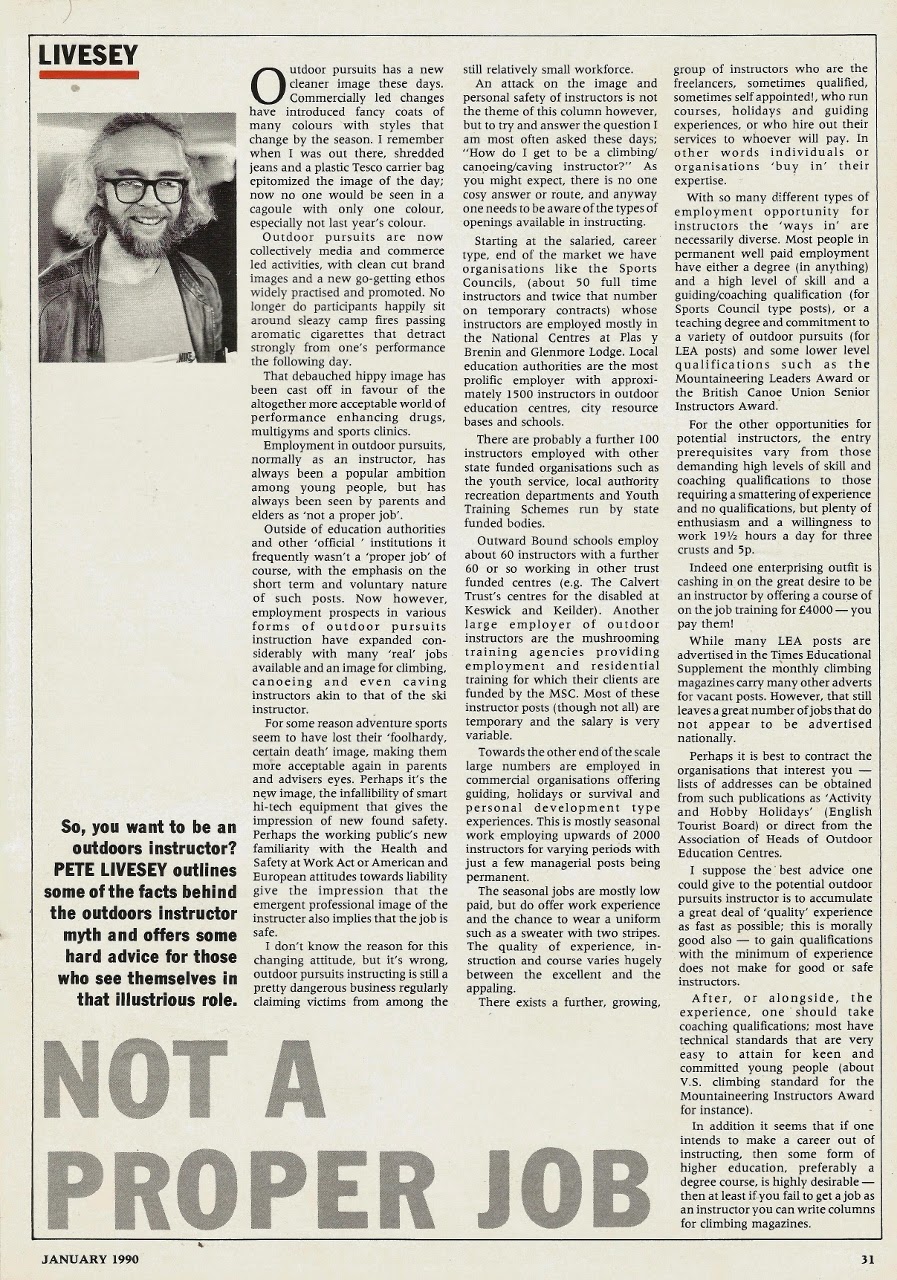 The reasons Pete Livesey suddenly gave up climbing when at the top of his game, has produced various theories. A popular take has been ‘the ego theory’. As a hugely competitive individual who was driven to excel in all fields, the 37 year old rock athlete could not stand the thought of a new hungry generation of climbers elbowing him aside in the eternal pursuit of the cutting edge route. Not one to contemplate a gradual readjustment to a new order where he was no longer ‘the Guvnor’, he exited stage left. Another popular theory is that he was simply bored...  been there, done that and bought the T shirt. It’s left to his long time climbing partner and Fast and Free co-author, John Sheard to explain the truth of the matter. And the truth is-as it usually is-somewhere between the two theories.

In addition, John Sheard offers Livesey’s increasing disillusionment with the trend towards bolted sports climbing as an additional concern. As a committed free climber who apart from establishing cutting edge routes, liked nothing more than freeing bolted climbs, it must have been jarring to see climbers like Ben Moon put up the provocatively named bolted route, ‘Statement of Youth’ on Pen Trywyn in North Wales. In fact, co-author Mark Radtke mentions a conversation he had with Livesey in his cafe in a closing chapter- ‘Legacy of a Leader’. Livesey still with a proprietorial interest in climbing ethics grumbled ‘Personally, I don’t see how a seventy foot climb with seven bolts in it can be E7!’.

It was clear that as far as Livesey was concerned, the game was up. Time to move on and take up a new outdoor activity. In this case, orienteering. Before he hung up his rock boots he offered this valedictory message which ended...

Sport climbing is simply mastering moves. I haven’t the remotest inclination to join this band of climbers nor have I anything against what they are doing.The BMC has made two big mistakes. Firstly, getting involved with access, and increasingly playing the role of policeman. Competition is the second. The BMC should take the position that mountaineering is what they are about, and have nothing to do with sports climbing. Other problems are on the horizon with access and professionalism. Anyway....I don’t care-bye!’.

Pete Livesey died in 1998 aged just 54. It’s incredible to mere mortals like myself, to think that Pete Livesey, the super-fit rock athlete who, on the face of it, was a picture of health, should succumb to a ‘nasty little tumour’. If he was still alive today he would be 70. An age when those who have spent a lifetime involved in outdoor activities and who have come through unscathed by accident or disease, are often still pounding the mountain tracks, breaching the waves or clinging to rock faces. It’s interesting to ponder just what Pete Livesey might have turned to in his eighth decade? Sailing, Paragliding, Sea Kayaking??? Whatever it might have been, you just know he would have blown his fellow veterans out of the water! 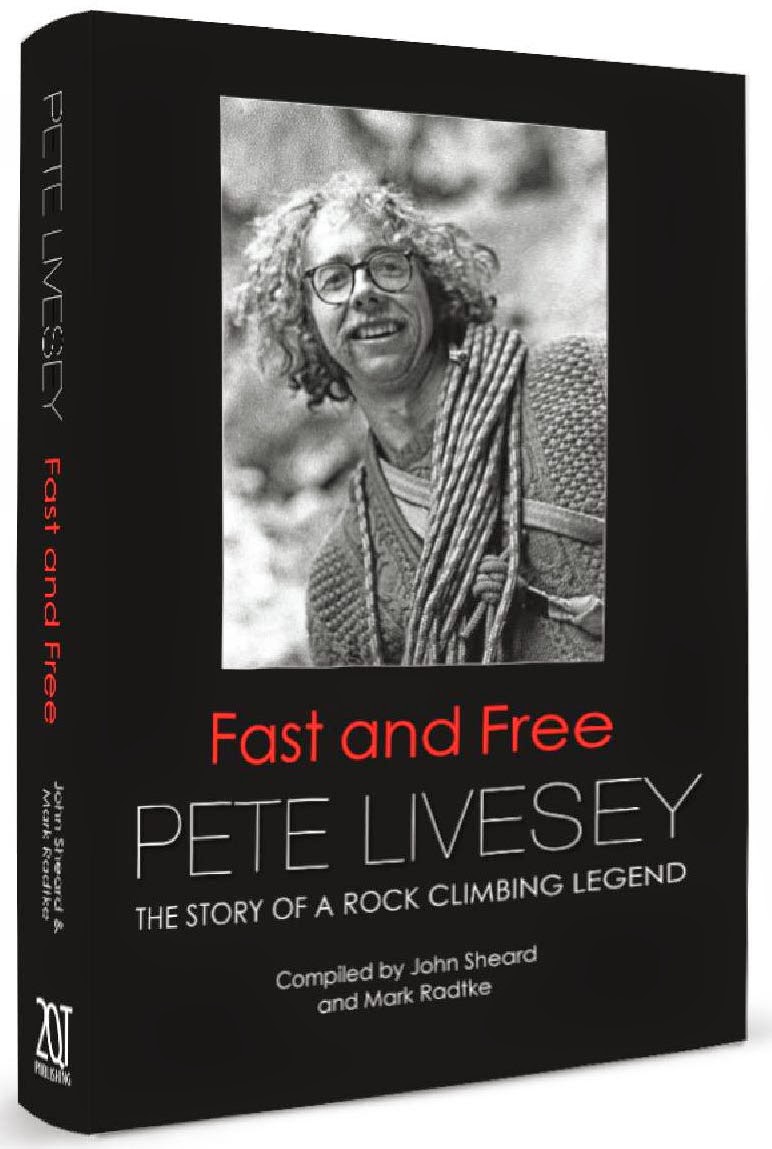 Fast and Free-Compiled and Produced by John Sheard and Mark Radtke . Writers include, Ron Fawcett, Geoff Birtles, Tom Price, Denis Grey and Andy Cave amongst many others. Available from...Cordee Publishing.