Engineers Eliminate:the nuts and bolts of a first ascent 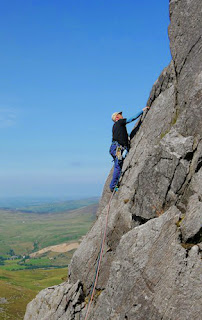 Martin sets off on the first pitch.

The plain facts are these; On Saturday 13th July 2013 Al Hughes and I arrived at Cwm Silyn with the sole intention of an ascent on Craig Fawr. Our objective a one hundred and eighty two metre, very difficult, Engineers Climb put up on 10th April 1925. Earlier that day the leader, E Dawes had led Herbert Carr and W McNaught on Overhanging Chimneys, a 100 metre severe at nearby Trwyn y Craig, subsequently held in high regard. Carr described it in his 1926 “A Climbers’ Guide to Snowden and the Beddegelert District” as...“A clean climb of great character and variety. Rubbers and  60ft of rope for the leader.”

The description further waxes lyrical for a page or so yet the much longer “Engineers” is disposed of in one paragraph, hardly inviting to prospective ascentionists. In more recent guidebooks however, we see that Engineers is heralded as a “good long climb” with a somewhat fuller description tempting those with an unusual interest towards rediscovery. That we would not make this ascent in the way prescribed was not due to any lack of information or disrespect for the original but more a curiosity to explore the prescient tasks set out before us like a gauntlet in stone.

Resting on open ground between the twin lakes it is possible to discern a boomerang arc shaping Silyns Cwm from Craig yr Ogof up and round tortuous scree slopes becoming lost in Clogwyn-y-Cysgod’s madness opposite the grey stoned great slab. It was here that George Mallory and Ralph Todhunter came in September 1911. Perhaps mesmerised by fruitful reconnaissance they chose not to attempt the slab preferring instead Y Cysgod’s brooding cliff of the shade and its four pitch gully to open climbing’s account. Awaiting us to the left, a thinner but equally tortuous ribbon of scree bordered by heather, concealing ankle snapping chasms, led towards unpeopled Craig Fawr whose high towered summit sentinelled the Nantlle Ridge.

Suffering in an unusual heat it was with great relief that we flung ourselves towards a goat cadavered gully before traversing some gross mosses under the shaded arm provided by the first easy rib. In twenty metres this rib landed us on a kind of bowling green half in shade, half out, whose inner kerb edged a steep walled groove with a perfectly solid belay pinnacle below. Slim at first this feature gradually deepened occasioning some stemming before side jugs allowed a jink left handily circumventing some suspect flakes.  Having elected to attempt this directissima now meant abandoning claims on our original concept and accepting grade increase which now reached the lofty height of ‘very severe, rubbers’. Finishing the groove by easier rock it came as a delight to find sound belays below a clean white slab whose summer inclined friction favoured ascent. It must be said, however, that rock reading from below does not always guarantee forgone conclusion and in a far less credible episode earlier in the week I had found myself barely five metres above the ground resorting to Yosemite aid tactics in a shallow scooped crack that, although positioned high above Machlyn Mawr, hardly counted as a mountaineering expedition and indeed had falsely represented itself when viewed from the deck as no more than HVS. 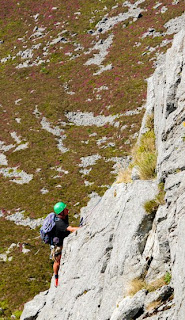 Confirming these suspicions George Smith eventually completed the route at E2 6A. Then, as if to compound such experience, roughly the same thing happened on a crag further up the same hillside though at the point of realisation George was at least high enough to contemplate leaving a national flag attached to our lower off sling since neither of us could force a successful outcome. Furthermore, in order to incinerate several midge squadrons a fire started with sphagnum moss and it must be admitted, an uneco-worthy crisp carton, billowed smoke up the entire height of our intended route further limiting visibility and threatening asphyxiation.

Here on Craig Fawr under pleasanter conditions the slab more or less behaved as predicted before leading to a left slanting shallow crack where delicate footwork made possible stepping into a niche with perfect friend placement in its steepening right reveal. Al had commented that the moves looked “reasonably athletic for a middle aged man” And whilst this was so, nothing  more than 4C, required serious attention so that I was able to gaze out rightwards admiring the silhouettes climbing Craig yr Ogof’s final nose before moving up to a gargantuan block belay nesting in a bay.  Below us Trwyn y Craig blanketed in maroon heather stretched down its flanks towards plateaued marshland resplendent with micro lake which George and I had traversed earlier in the year after climbing the somewhat remote Crack at the End of the World in swirling cloud. 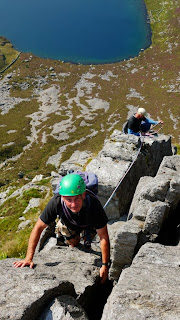 The obstacle now confronting our undertaking came in the form of a chock stoned wide crack whose chaffing sides offered a way between its aperture that might have been wise to neglect. Landing above it on a wide ledge a vertical smooth corner with an obvious foothold above head height on its right wall and an amenable gear crack, posed the next problem.  Getting established on said foothold now focused concentration and subsequently became known as the ‘ruper step’ since it displayed difficulties at least as great as those encountered on some stair cased slate paving slabs leading to the back door of a house in Tregarth which under winter conditions had occasioned the scene of several failures by those under the influence of alcohol (Rupers) unwittingly approaching the premises after dark. In sober reckoning terms the corner proved around 5a and though it could, if necessary, be circumnavigated round to the right at a much easier standard, few suitors would wish to escape its charms.

Thus after laybacking onto the crucial foothold solid hand jambs allow reach to an unhelpful pod which is in turn exchanged for a grooved finale onto rough sloping rock at an angle of ease. Having progressed so far as to be comfortably seated below the final tower we saw that its square front face overhung showing a dramatic contrast between its intermittent leaning striations and less alarmingly steep rock running up ten metres or so towards a shadowed cleavage where both gradations met. Fearing any wind pipe gripping suspense that might ensue from attempts at surmounting the overhanging face we clung decisively to its right arête where grooved slabs and walls offered escape out on to an exposed veranda a top the nose.

Sun shafts burst a passing cloud so that over a hundred metres below boulders and moor land within grasp of the lake’s gently shimmering waters, were caught glowing a different hue. Far enough out from Yr Ogof, framed under Y Cysgod’s furrowed rim a peregrine’s wing showed rufus turning in dive and was gone. In a further thirty metres castellated ridge gave way to scrambling then Craig Fawr’s summit behind which, loping down the naked ridge we met Tony Loxton and splayed out to drink.

Such are the vagaries and fickle nature of mountain weather that after last year’s consistent deluge forecasters claimed torrential rain would again dominate our summertime. That this had not proved so came as a surprise. Perhaps a blip in the malfunctioning atmosphere caused it but, whatever the reason, we now basked on castellated rocks like legionnaires halted at the ruins of a dessert fortress before retreating in the grip of a heat wave that had started four weeks previously. 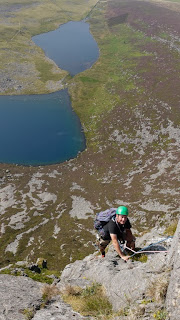 Descending Cysgod’s long arm with the crag of the hollow of the black lake basking in silence to our left we stopped at a vantage point taking in Yr Ogof’s great slab now curiously hazed in infra red glow. We recall that Noel Odell, the last man to see his friends George Mallory and Sandy Irvine alive on Everest, numbered the first ascent party doing Ordinary Route in 1926 and that John Menlove Edwards, one of the great tragic figures of welsh climbing, found the majestic Outside Edge in 1931. Remembering some lines from Andre Mignot in Tibetan Marches ‘to neglect one’s own or one’s dependants interests is not a mark of discernment’

So downwards we went under evenings spell, between the long hills and the tall sky, our figures set out in silhouette, hearing the call from secret radongs and keeping time on the stony path we quickened the pace, dreaming of ale. 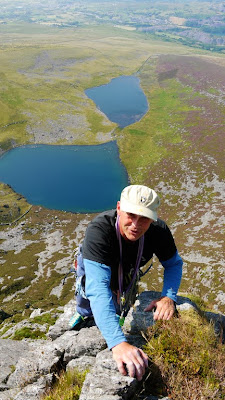