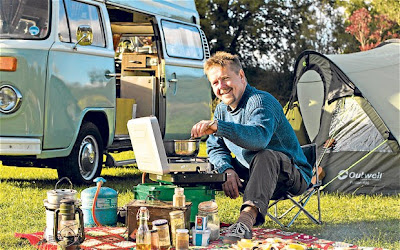 Obligatory cheesy photograph of the author

First off..the title of Josh Sutton’s first book ‘Guyrope Gourmet’ is slightly misleading if you include all elements of canvas dwelling. No problem if you're dossing in a huge frame tent; however, for habitues of one man backpacking tents, then clearly, the latter constituency will have great difficulty putting Josh’s ideas in practice. I can’t see Chris Townsend or Cheryl Strayed carting cast iron cooking pots, barbeques and two ringed cookers -with grill- across the wilderness somehow. Nor can I see the intrepid backpacker on the Pennine Way, happening upon someone selling just caught lobster, freshly pulled asparagus or newly bagged pheasant. That being said, this is a really fine little book for those who are doing their travelling by car or motor home.

The author, Josh Sutton describes himself as a free lance writer specializing in camping cuisine and Guyrope Gourmet is his first foray into the book world although he has had articles published in various publications including, The Guardian, Camping World and Yorkshire Post.  A clue at the intended user is provided by the cover photograph which shows our genial author perched outside his 70’s bay VW Camper. This is not to confuse Josh with another wandering foodie who also happens to be 30/40 something male who travels the land rustling up mouth watering meals in his..errrm...70’s bay VW camper!

The other V Dub chef, Martin Dory, had a TV programme ‘One Man and his Camper Van’ aired on BBC2 but I caught it  for the first time recently being repeated on the Quest digital channel, and a very pleasant 30 minutes of televisual time it was too. But that’s enough of Josh's  V Dub culinary rival... to get back to the work at hand.

Guyrope Gourmet is attractively put together and usefully structured. After the intro, he advises fellow galloping gourmets on ‘kit and carboodle’. From utensils to larder items. I must admit, I am really taken by one of his ideas. That is,ripping out the drum from a trashed washing machine and using it as a barbeque and fire pit. I’ll be keeping my ear to the ground from now on to check on friends or family who have recently suffered a flooded kitchen!

As for the recipes themselves....Well, as you would expect, they are perfectly straightforward although as previously mentioned, some of the ingredients are not exactly that easy to find. Particularly,if you are in the back of beyond. Hence, a bit of careful planning would be in order. Split into sections which include, breakfasts, pasta dishes, soups, meat & poultry, etc....It all looks pretty appetizing on the page thanks to the creative use of photographs and page setting.

Not that much within for vegetarians but for seasoned carnivores who want something more exciting than a Vesta beef curry or tinned stew next time they pull into a camp site- or even better- find themselves in some romantic far flung location- then Guyrope Gourmet ticks all the boxes. Middle Eastern lamb stew with shredded ginger and fennel it is tonight then!