John Redhead's Colonists Out is released to order online 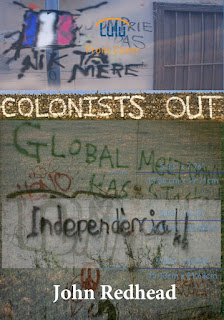 Legendary climber and artist John Redhead's long awaited new book, Colonists Out, is out now and available to order direct from the publisher- priced a £12.00 for the paperback. The author who spends an equal amount of time in North Wales and the South of France, is still climbing and has been putting in the hours on Cloggy and The Orme recently.  Colonists Out is described by the author as  "The search for the meaning of home from Eryri, North Wales to Canigou, Pyrenees Orientales. Trickster rejoices!   '

The book touches on controversial issues such as Welsh language zealotry and racist attitudes towards those considered outsiders, and the damaging impact which agricultural subsidies have had on the natural environment in the uplands.  His experiences in The Pyrenees provide a fascinating insight into the distinct culture of this rural part of the world.A culture,the author discovers,is not that dissimilar to rural North Wales in it's dark, tangled complexity.

For those for whom the author is best known and appreciated as a climber, then take heart.Climbing does indeed feature with some fascinating insights into the often arcane and surreal world of Welsh climbing!

With a forward written by fellow North Wales activist, John Appleby and with a photographic contribution from Ray Wood, John Redhead promises the work will be an organic and interactive work with readers able to contribute their own thoughts and suggestions online. Colonists Out can be ordered direct from www.johnredhead.org and a climbing extract- 'The Rock'- will be featured on Footless Crow in the next few days. 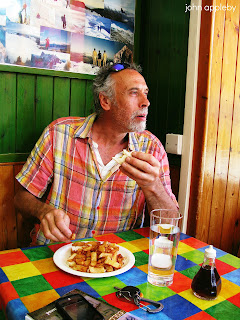 Tuesday: Chris Bonington is on top of Yr Wyddfa with the Olympic torch and John Redhead is in Pete's Eats with a chip butty...all is well with the world!