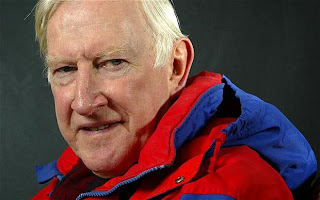 A celebration is to be held to remember the extraordinary life of George Band who was an important member of the successful 1953 Everest expedition and who became the first man to climb Kangenjunga with Joe Brown in 1955.

The celebration will be held on Tuesday 20th December at the Royal Geographical Society in London.

George Band was born in Taiwan in 1929  to parents working as missionaries. He was educated at Eltham College, London and Cambridge and London Universities, where he studied Geology and Petroleum Engineering. During National Service he was an officer in the Royal Corps of Signals. At Cambridge he was President of the University Mountaineering Club.

He was the youngest climber on the 1953 Everest expedition led by Colonel John Hunt, aged just 23. Two years later he went to Kangchenjunga on an expedition led by Charles Evans, and with Joe Brown, made the first ascent of the mountain, the third highest in the world and which was then then the highest peak still unclimbed. Further expeditions to the Alps, the Caucasus, Peru and the Karakoram followed.

After retiring from the oil industry, George spent more time climbing and trekking, and began lecturing on his mountain experiences. In 2003, to mark the Everest Jubilee he wrote Everest: 50 Years on Top of the World, and this was followed in 2007 by Summit: 150 Years of the Alpine Club, in celebration of the founding of the world’s oldest mountaineering club in 1857. George also became Chairman of the Himalayan Trust UK in 2003 and served in a number of other positions including: Chairman of the Mount Everest Foundation; Member of the Council of the Royal Geographical Society and; Appeal Patron for BSES Expeditions.

This is an open service and all who knew George, would like to pay their respects, or who would simply wish to celebrate his life, are most welcome. The celebration will begin a 1830-2030hrs with doors opening at 1800hrs (Kensington Gore entrance)