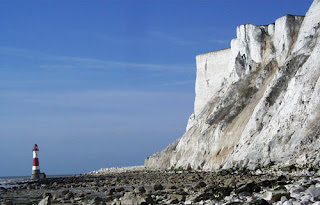 Beachy Head.Scene of a Crowley epic!


One of Crowley's favourite targets for criticism was the Alpine Club, which suffered enormous abuse at his hands. When chronicling the formation of an expedition to Kanchenjunga, he wrote:–‘Thanks to the Alpine Club, there was no Englishman of mountaineering ability and experience available.’ Elsewhere, he said:–‘The policy of boycotting Eckenstein and his school, of deliberately ignoring the achievements of Continental climbers, to say nothing of my own expeditions, has preserved the privilege and prestige of the English Alpine Club. ignorance and incompetence are unassailable. Ridicule does not reach the realms of secure snobbery. The mountains themselves vainly maim and murder the meddlers; they merely clamour all the more conceitedly to be considered heroes. It is one of the most curious characteristics of the English that they set such store by courage as to esteem a man the more highly the more blindly he blunders into disaster.’
Such condescension implies that Crowley himself was an exceptionally competent mountaineer, and indeed there seems little reason to doubt this. He joined the Scottish Mountaineering Club in 1894. His application shows that even at that time, when he was only nineteen and had not yet benefited from Eckenstein's instruction, Crowley had a backlog of experience that was formidable for the times.
Between 1894 and 1898 he visited the Alps yearly and, along with Collie, Mummery and Hastings, did much to further the cause of guide less climbing. Although he made no major new ascents, some of his efforts sound somewhat nerve-racking even today. His description of an ascent of the Vuibez ice-fall in the Arolla district runs:–
‘Our way was barred by an undercut ice-cliff, which at its only assailable point rose some 14 - 20ft. above the detached serac on which we were standing. Leaning over the intervening crevasse, the second man was able to support the leader who, standing on his shoulders (in crampons), cut hand and foot holds in the wall above. With some assistance from behind with an axe the leader arrived at the top of the wall and the rest of the party followed. Above this point, the climbing became difficult.’
The final bombastic touch is typical of Crowley. At home he made improbable ascents of the chalk cliffs at Beachy Head (see SMCJ., iii, 288ff.), whose looseness might well dismay the hardiest modern sea-cliff climber.