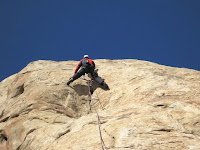 Chris Bonington on the crux of Cumbria Paul Ross©

They might have 146 years between them but Lakeland legend Paul Ross- a long term Colorado resident- and a little known British mountaineer, Chris Bonington who happens to live in Paul's old stomping ground, proved they are still capable of ferreting out classic three star routes. Albeit, far from the bracken wreathed, black moss crusted crags of Borrowdale and in this case, the vastness of the Utah desert near Three Fingers National Park in the San Rafael Swell area. Climbing with Lance Bateman, Paul and Chris established an 830', six pitch, US 5.9 (UK HVS-5a/b) on the impressive Triple Buttress.


Details below are from Paul Ross.

The Route was named after the part of Britain where Chris still lives and Paul used to! Starts just right of the slot canyon and left of "Mellow Yellow" P1). 4th/5th class 150' up broken rock to below a groove that is up to the right.From here the pitches and rock is of very good quality.P2).Move out left and follow an easy slab that curves up to the right to a short wall over this to a good thread (in place) below a block. 160' '5.6R P3).Up nice slab in right corner then to a groove (5.8 with pro) on the left go to left edge and double anchors.200 5.8 P4)Up the edge passed a couple of thin moves then follow the edge to double anchors. 170'5.7R P5) About a 100'of 5.6R slab to a short steep right facing corner with pro then move over to the left edge and double anchors. 200'5.9 P6).Easy slab for a 100' to a large ledge system .Junction with the top of Mellow Yellow. Descent>. Rap Anchors of M-Y are found about 30' down at the top of a groove (Mellow Y)Rap this pitch (200') to a big ledge.Here one will see another set of rap anchors that descend MY.A more direct rap can be made down a route just north of M-Y .Scramble 30'along the ledge to the north then down to the right will be seen rap anchors at the top of the long groove of the route "Lance-A-Lot" From here a 200' rap to a small ledge.then another rap to low angled slabs.These are 4th classed 400' first up to the right then left down a groove and continue to ground.(Future plan is to install other rap anchors to the gully that will avoid the slab scramble)

Park about A 1/4 mile from entrance to Three Finger Canyon. The Triple Buttress area is the steeper line of rock straight opposite ..see photos. 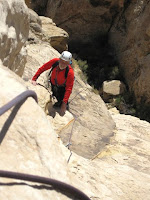 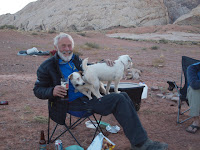 Thanks to Paul Ross for permission to use his photographs and routes description details.
Posted by Footless Crow at 09:04