A Dream of Edwin Drummond....Reviewed 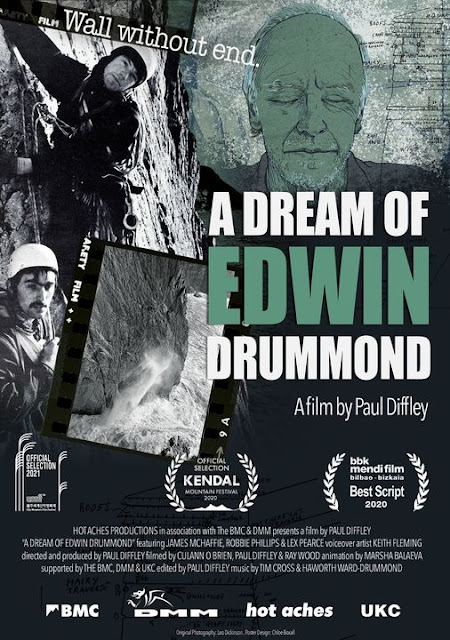 Ed Drummond was always something of a climbing hero to me. In fact I was aware of him before I had even started climbing through his well publicised ascent of Nelson's Column with Colin Rowe to protest against the apartheid regime in South Africa. An ascent since described as the first political protest climb in history. Eventually as a climber, I would become all to well aware of his unique place within the sport and for myself, his achievements and his buccaneering persona only cemented his place in the pantheon of heroes.

Now Paul Diffly and his Hot Aches team have delivered something of a late Christmas present for those like myself who remain in awe of this climbing poet, activist, explorer and all round renaissance man. In ' A Dream of Edwin Drummond' the makers have captured the essence of the man through contemporary footage and interviews shot when he was alive, and through the prism of current rock stars, James McHaffie and Robbie Phillips who are drafted in to recreate some of Drummond's more memorable chapters. Drummond's classic Dream of White Horses above the foaming Irish Sea at Gogarth-first climbed with Dave Pearce in 1968- is recreated by James McHaffie with Dave Pearce's son Alexis sharing the rope. Shot in appropriately sixties 'technicolour', James Mac and Lex shuffle their way across the classic HVS using the protection and footwear contemporaneous to the first ascent.

Before that, JM solos a knife edge arête on one of the gritstone edges of England and takes on a hard route on Cloggy's Great Wall. “ Above me the wall gleamed rainy, bald as a whale' The iconic white helmet-a JB perhaps?- clamped over his head. A counterpoint against the dark cliff which rears up and disappears into the mist. Scottish hard chaw Robbie Phillips recreates Drummond's performance art which featured at climbing literary festivals across the world, and which I believe was first performed at a Leeds mountain literature festival, organised by Terry Gifford and David Craig. Twirling on scaffold frames and flexing and uncoiling amongst the bars. Still bearing the iconic white helmet, RP elegantly recaptures the feline ballet which defined a Drummond's performance.

'A Dream of Edwin Drummond' essentially concentrates on his extraordinary climbing career. The well documented darker chapters of his life where tragedy stalked him for many years and which were at the heart of Simon Beaufoy's 1993 film 'Shattered Dream' are absent here and why should it be. For the film is a celebration of an extraordinary climbing life,not a warts and all biopic.

With the end nigh, Drummond now held in the grip of the Parkinson's condition which had defined his later years, finds himself back at St John's Head in The Orkney's. Scene of one his his greatest climbs. The Long Hope Route-E7- which he completed over several gruelling days with a fresh faced Oliver Hill. He was back with the Hot Aches film who were filming Dave MacLeod's attempt to free the crux headwall which went eventually at 8b. Poignantly, its creator looks across the bay at the route and finds himself awe struck that he could ever have climbed in such an intimidating place!. The footage and interviews at the time shows someone at peace with themselves and accepting of the place they were in.

These different elements of the film which blends the old and the new each time returns to a beautifully animated image of the man himself. Head and shoulders resting against a pillow. Eyes closed and face content. Topo lines and faint route names appear on the pillow. A red line occasionally snakes across the image. The 'throbbing red rope' or is it blood pulsing through a tired body? Whatever interpretation you make, it can't but help evoke a death bed scene. Quietly reposed,calm and accepting. Where the man at the end of his life dreams of white horses.

A Dream of Edwin Drummond is now available on Vimeo