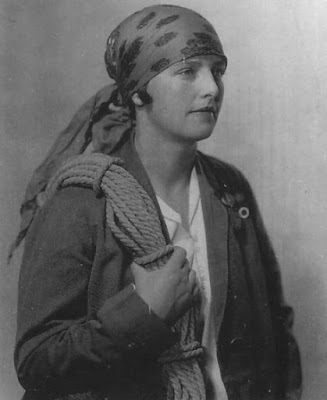 Author, Dan Richards in the words of the publisher’s blurb, ‘is on the trail of his great,great aunt, Dorothy Pilley, a prominent and pioneering mountaineer of the early twentieth century’. For reasons I’m not quite clear about, Dan recycles the original book title used by his subject. Is this an attempt at creating familial and literary synchronicity....not sure? However,‘Climbing Days’ -version two- it is, and most would argue that if an author spends years of his time,effort and funds researching and writing a fairly substantial book, then they can title it as they please!

Dorothy Pilley’s contribution to mountaineering obviously warrants a fresh take on her life and times and if its a family member who undertakes the role then at least they will probably be able to open doors which might have remained shut to an outsider.

For those perhaps unfamiliar with the subject-and outside of a dwindling number of traditional climbing anoraks that must represent probably the majority of climbers under 30 or even 40-then its fair to say, her contribition to and impact on what was an overwhelmingly male dominated sport was pretty unique for its time. It would probably be easier to just borrow the Mountain Heritage Trust’s potted biography at this point....

Pilley was one of the scarce band of female all-round climbers operating during the 20s and 30s, ranging throughout the Alps as well as the crags of Britain. But even more prescient, she actually sought the company of other women to climb with in preference to men, and was one of the leading lights in instigating the formation of the World’s first all-women climbing clubs, The Pinnacle Club. As well as these robust feminist credentials (or ‘feminine’ as she quaintly preferred to characterise her philosophy), Pilley is widely known for her famous semi-autobiographical book, Climbing Days, in which she recounts her splendid adventures in Wales and the Lakes, through to Scotland to the Alps. It all sounded like one long glorious summer of climbing fun, all washed down with lashings and lashings of ginger beer.
Further reading: Climbing Days, Dorothey Pilley. Secker & Warburg, (1935)

Pilley, despite her close links to the all female Pinnacle Club and frequently sharing a rope with fellow female climbers, created her most memorable routes with her husband and lifetime partner Ivor (IA) Richards. A respected and renowned English Educator, literary critic,rhetorician and all round Clever Clogs! With Richards she recorded what is probably her most significent and well regarded first ascent, that of the north ridge of the Dent Blanche,in the Alps with Joseph Georges and Antoine Georges. However, UK activists will more more familiar with Idwal Slabs perennial favourite 'The Ordinary Route'.

But that enough about her place within the mountaineering firmament, what about her Great Great Nephew’s account of her life and times and his personal pilgrimage across Europe to retrace her clinkered steps? Well, there is no doubt that Richards is a fine writer who has meticulously investigated every element of Dorothy Pilley’s life and laid it out on the page in fine detail. After saying that, I would have to say from the start that at nearly 400 pages long it would have certainly benefitted by some rigorous editing to cut out the padding and whittle it down to a more coherent and hence more readable 200+ pages.

As something of a hybrid-part biography,part travelogue, part personal musings-coming at the book from a climbers’ perspective, I found- as others will I’m sure- the rather wandering structure of the book, hard to follow at times. The author’s early steps literally learning the ropes in Wales and at Glenmore Lodge; commenting on the architecture in Barcelona; describing a meal in an Alpine hut. You might think that it’s the tiny details that add to the narrative and help build the bigger picture but in this instance,for me at least, it becomes a wee bit ‘off piste’ for my liking and somewhat undermines what the author is trying to achieve.Given the significance within climbing of the subject and wide palette to draw from, a little less superfluous detail and a greater degree of concentrated focus would have created a more rounded and definitive work I feel..

I will freely admit though, that perhaps I suffered from a form of inverted snobbery, for I found it hard to warm to the subject herself. There is no getting away from the fact that Pilley and Richards were products of their age and class. Despite being portrayed as some sort of proto feminist, daringly changing from long skirts into knickerbockers at the crag and encouraging 'sisters to do it for themselves', Pilley was very much someone from that privileged class. Those fortunate enough to be able to indulge their passions without having to worry about trifling things like having to work. I certainly didn’t pick it up from the book any mention of her ever having held a job or pursued a career? Swanning around Europe and climbing mountains with guides while staying at comfortable hotels, does somewhat undermine any attempt to present her as some sort of enlightened mountaineering revolutionary.

Of course that was how society was structured in the early 20th century and at least credit Pilley for having the tenacity and drive to make her mark in a man's world. Being a social butterfly within London's cafe culture would have been the easier option for a middle class gel in those socially stifling times. 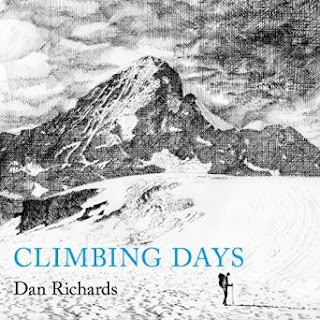 Despite my reservations, there is still enough material in Climbing Days to enjoy and which will further enlighten our knowledge and understanding of an interesting figure in 20th century British climbing. Not a book which will draw in a wide number of readers from outside the climbing/mountaineering fraternity-unless they are drawn in by IA Richards role in Pilley's story - but certainly a book which will appeal to students of mountaineering history .