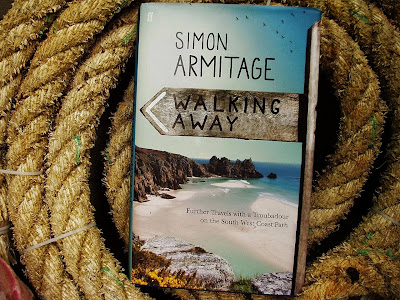 Poet Simon Armitage follows up his hugely successful ‘Walking Home’ –an account of his ‘back to front’ long distance trod down The Pennine Way to finish close to his Yorkshire home- with an account of a 2013 expedition he undertook following the northern South West Coast path which winds its way from Somerset to Land’s End. In Simon’s case the plan was to finish on the tiny Scillies island of Samson. As an undertaking this 250 mile walk matches just about anything in the UK, for despite its lack of soaring hills and mountains, anyone who has even walked a section of it will be familiar with the undulating peaks and troughs as the trail falls into hidden green valleys before rising steeply up out of the shadowy abyss in a repeating cycle which goes on for miles. Particularly in the section on the Culm Coast twixt Devon and Cornwall. By the time you have walked five miles you will have gained a couple of Welsh mountains in elevation!

For those not familiar with the concept employed by the poet, Basically, Simon offers himself as a wandering troubadour; walking the trail in bite size sections-usually between 10 to 15 miles although the average seems to be about 12. In return for board, accommodation and the portering of his suitcase  between gigs and digs, he performs poetry readings at the end of most legs. The venues vary from pubs to bookshops, living rooms to yurts. At the end of each gig the poet passes around a sock- why a sock and not his expensive cattle driver's hat I don’t know?- but nevertheless, apart from fishing out the odd boiled sweet, betting slip and chewed pencil-he generally rakes in enough to make each section of the walk a profitable enterprise.

I must say, if you are engaging in an long distance walk like this and you can end each leg with a shower, hot meal and fall into clean sheets and a soft bed then why not? It might not fit in with the traditional Rufty-Tufty approach- backpacking for weeks on end with the equivalent of a small car on your back - but I know which approach I’d rather employ if I had a legion of admiring Guardian readers falling over themselves to service my every need! And by and large it does indeed seem to be the nice middle class, Posy Simmonds-esque liberal Guardianistas who are at the forefront when it comes to servicing the poet’s enterprise or indeed, who actually know who Simon Armitage is. After all, in X Factor UK 2015, poets are generally as well known as Edwardian spiritualists or Inuit whale-catchers.  I’m sure, despite the predominance of the aforementioned culturally endowed, a lot of people who turn up for his readings have just been told , ‘we’ve got a bloke, Simon Something, coming to the village hall whose been on telly and written books and stuff’.

Starting out at Minehead, Simon stays in the Butlins Holiday Camp although, by his own admission, he chickens out at giving a reading to an audience where replica football shirts and spray tans are much in evidence, and hi tails it off to give a reading in some rustic hostelry where freshly pressed Denim and Laura Ashley is the preferred dress code. ‘How could I compete with an Olly Murs tribute act’ he later offered as an excuse for this act of cultural cowardice!

Wandering through ‘Zummerzet’ with a different entourage picked up at each leg, he encounters a bountiful harvest of humanity whose quirks,charms and indiscretions provide a rich source of material. From the Country squire complaining about ‘The Ravens ruining his land’-Simon later realises he means ‘ the ravers’- to the tramp bearing the legend ‘Fuck off Toffs’!  With his keen observational eye and descriptive talents, he brings to life this endless parade of characters and sets them into a landscape which even to the unfamiliar is imbued with familiarity. The sun dew on wet grass, the diamond backed sea, the shadows which speckle the dense copses and the owl haunted country graveyards falling into night. 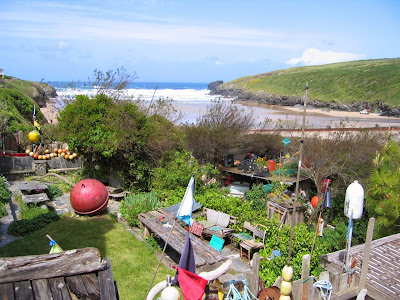 I’ve seen Simon described as ‘saturnine’ in some quarters...Never! What I love about his writing is his wry laconic humour and like most Northern folk, he’s not averse to using self deprecation to keep his boots firmly on the ground. Drawing the reader in to a world where stages are completed with the aid of ibuprofen and a muttered prayer to St Christopher; where cloudbursts wash away optimism and fellow travellers peel away like flotsam on a Devon tide as the sea fret becomes a sea squall.  This style fits the pace of the book perfectly. Whether he’s describing the characters, the land, the sea or his mood and physical condition, it’s hard not to engage with a writer who wears his heart on his sleeve and who isn’t afraid to puncture the overall mellow vibe with the occasional dark thought and reveal doubts about the validity of the entire enterprise.

However, his spirits are never beaten into submission for too long and aided and abetted by his moveable feast of fellow walkers, The Marsden Pied Piper, each night, leads his assembled troupe into the welcoming arms of his hosts, where, refreshed and with batteries recharged he can regale the local communities with anecdotes and poetry before Morpheus takes him on a well earned journey into the land of nod.

Along the way, various characters weave in and out of his orbit. Margaret Drabble describing how she offered to put up Salman Rushdie at the height of the Santanic Verses brouhaha. Not expecting him to take up the offer, she was rather taken aback when he turned up with a team of bodyguards and security goons! Artist and filmmaker Jane Darke feeds him figs and black pudding at her beautiful gaff above the beach at Porthcothan near Padstow. As someone who has partaken tea and cake here with Jane, I can confirm the generosity of mine hostess and the aesthetic delights which abound hereabouts within a home and beach top garden which is  decorated with the colourful bounty collected through the tireless ‘wrecking’ of the Atlantic shore.

Towards the end of the journey, Simon’s body is starting to resemble his boots. Falling apart at the seams and held together with spit and hope! His keen descriptive eye never loses its perspective though and people and places remain as vivid and well observed as the day he took his first steps in Minehead. I’m not sure if he has a photographic memory, walks along jotting into a notebook or constantly addresses a Dictaphone??? Whatever device he uses he certainly captures the essence of the journey throughout and the pace of the narration never lets up for a moment.

Will this be the poet’s final epic long distance walk? After all, he is a fifty something academic more used to frequenting the libraries and lecture rooms of our metropolitan centres of learning than battling the elements in remote climes. It wouldn’t be a terrible spoiler to hint that this may be the case although I detected a weakening of resolve as, back home in Yorkshire, he gazes at some new walking boots still wrapped in tissue paper in the box they came in. 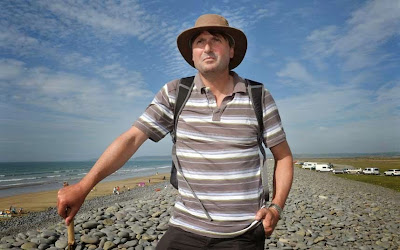 Man at Sea and Hay. Simon Armitage photo: The Telegraph

I certainly hope so for Walking Home and Walking Away have both been excellent and although outdoor zealots might snort at this outsider bringing long distance walking into the Sunday Times Best Seller domain and somehow sullying its Spartan tradition of grim suffering and mortification through the adoption of  a  ‘walking for softies’ approach, well...tough! It's Long distance walking Jim, but not as we know it and you'll never think of a Galapagos Tortoise  in the same way again either!

Walking Away is published next month on Faber and Faber.