Eric Gill: to the Mountain 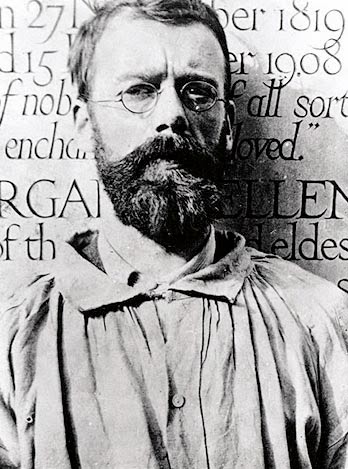 IT WAS during the long cold winter of 1923 that the renowned artist and craftsman, Eric Gill, arrived on a dark and snowcast night at the head of the remote Vale of Ewyas, deep in the Black Mountains. Gill's journey of discovery with his young family on this most inhospitable of nights, brought him to a deeply secluded derelict dwelling which was to be the artist's home for the next four years. Arriving around midnight, Gill and his family entered the rambling Victorian Gothic monastery of Capel y Ffin. Gill later described his first vision of Capel y Ffin as "a weirdly exciting business." The old monastery stood in splendid isolation in the heart of the Black Mountains and offered Gill the opportunity to recreate his vision of an independent and self sufficient artistic and religious community living a life of creativity and spiritual fulfillment, gloriously divorced from the humdrum if hectic urban life. 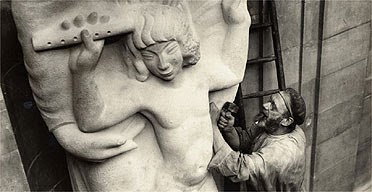 Today Gill is best known as a sculptor and typographer of international stature. One of his best-known works is that of Prospero and Ariel which stands above the entrance of the BBC's old Broadcasting House. As a designer of typeface, Gill created the universally accepted Gill sans-serif and Perpetua, among more than half-a-dozen typefaces produced by this,the most versatile artist/craftsman since William Morris in the mid 19th century. There is a fine example of Eric Gill's work in North Wales. Gill was a frequent visitor to Chirk Castle on the Welsh/Shropshire border. In the early 1920s he designed and carved the town's war memorial, which stands in the centre of the bustling little village just off the busy A5. How many motorists travelling into North Wales must have passed by the monument without ever realising its significance and stature of its creator?

When Gill and his family moved into Capel y Ffin in August 1924, Gill had a dream to create in this "wondrously beautiful valley" a home and work environment that would attract an artistic colony of kindred spirits. He imagined that Capel y Ffin would soon become a rural idyll that would sustain and nurture a bohemian community of artists and crafts-people, drawing in the brightest and best of its contemporary arts movement. Coincidentally, 60 years earlier an Anglican clergyman, Father Ignatius, had held a similar dream. His vision,like Gills',was to transform Capel y Ffin into a centre for spiritual awakening and contemplation, sustained by a self-sufficient lifestyle. It was his dream to revive the Benedictine monastic lifestyle within the tranquil setting of the lovely Vale of Ewyas. The remoteness of the valley, sheltered geographically from the harsh realities of the outside world, seemed an ideal location to revive the high principles of the Benedictines. However, for Father Ignatius the remote position of Capel, with its uncompromising winter climate, defeated his quest and with his handful of followers,he was forced to abandon the valley. 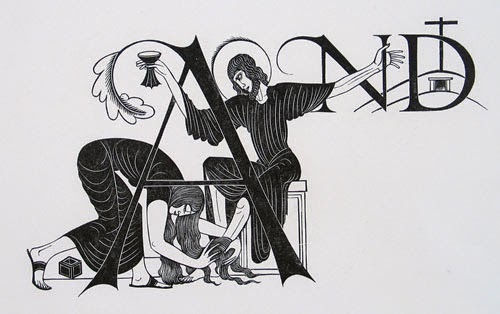 Although Gill had intended Capel y Ffin to become a place of pilgrimage and high artistic ideals, his Spartan home failed to lure the host of like-minded artists and craftspeople from their metropolitan comforts. Despite his growing reputation in the arts movement, the flood of artistic creativity into Capel y Ffin was never more than a trickle of talent. During the early period of Gill's residency at Capel y Ffin he was joined by his friend, the highly regarded printer, Count Kessler. Kessler, however, was unimpressed by the monastic lifestyle that Gill had adopted and soon departed. After Kessler's return to more hospitable climes Gill was joined by the soon-to-be-acclaimed artist/poet David Jones. Jones's stay at Capel y Ffin from 1925 until 1928 was to be the Welsh artist's longest period of residence in his native land. It was at Capel y Ffin that Jones met Rene Hague, the printer. Hague was later to print Jones's epic poem In Parenthesis. In his poetry and art, Jones betrayed a deep fascination with the Arthurian legend. Capel y Ffin provided the artist with a rich source of Arthurian inspiration, for on his native hills and valleys Jones drew deeply, and readily transferred the inspiration the land gave into words and brush strokes.

Within four short years Capel y ffin was again empty. Eric Gill's dream-like Father Ignatius before him- had foundered on Capel y Ffin's geographical remoteness and a harsh winter climate that  deterred all but the most hardy. When Eric Gill crossed over the border into England he left behind him more than a gothic homestead; he left behind a dream that still draws people into rural Wales today. In his heart Eric Gill never left Capel y Ffin and the rugged land that so captured his imagination. He returned in the early 1930s to stay with one of his daughters, who had since settled in the area. It was during this period in the Black Mountains that Gill wrote his remarkable biography. 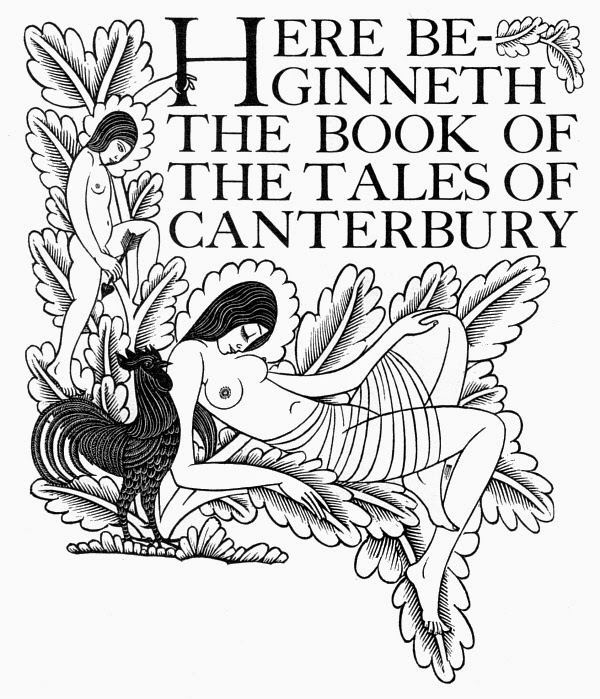 Throughout this work Gill refers to the rural idyll that had so inspired him in the Vale of Ewyas. Although factors outside his control had defeated Gill's inspiring plans for Capel y Ffin, he always remained true to his ideals and always regretted his failure to inspire others to join him in his artistic heaven deep in the Welsh mountains.

Today Capel y Ffin is a private residence, although the chapel built by Gill is open to the public. Above the altar is a painting by David Jones. An image of spiritual awakening within a building that resonates with Eric Gill's sublime vision of artistic and spiritual fusion. 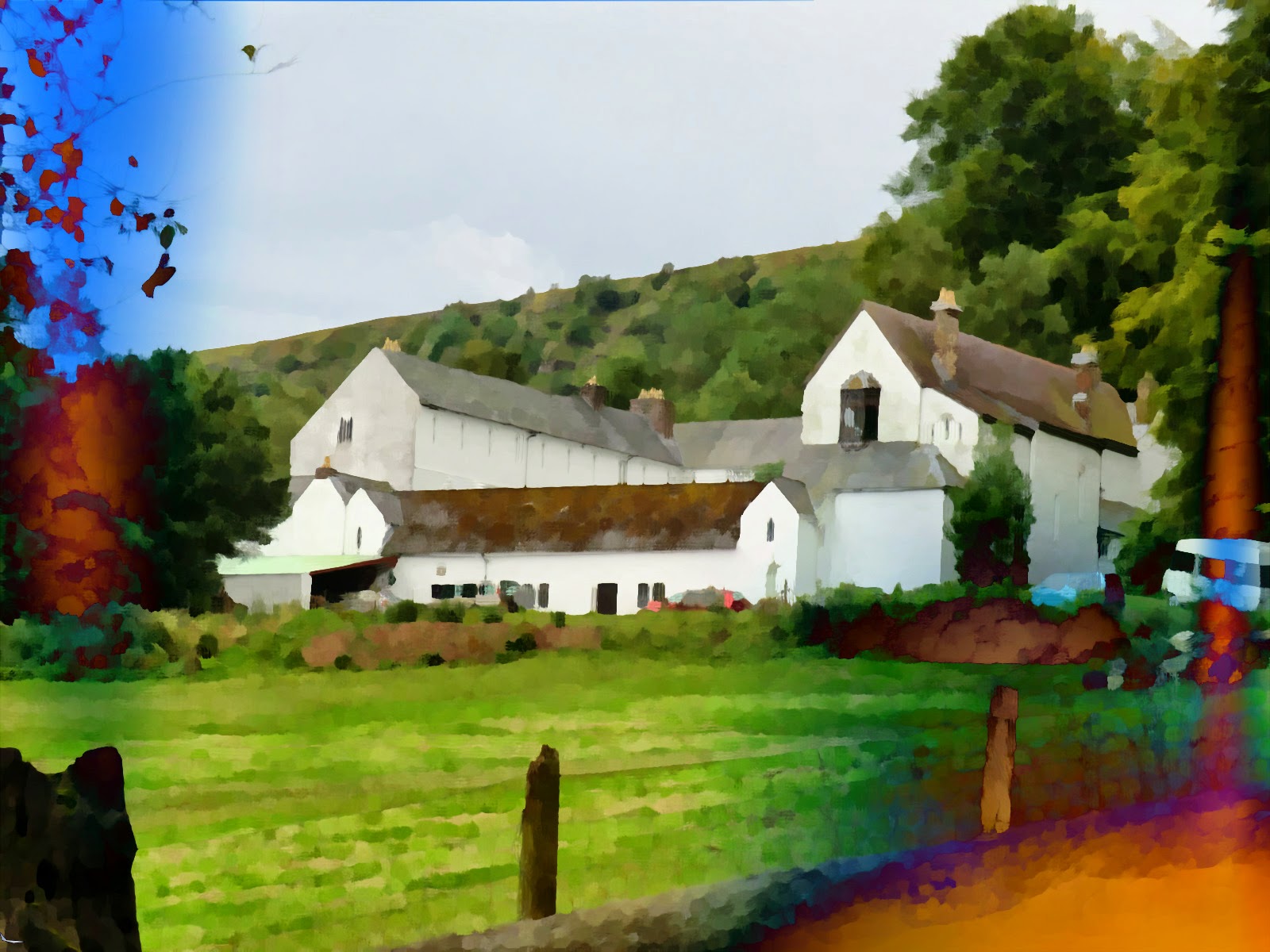 Things to do in Lleyn when you are daft.

I do believe that areas like the Lleyn could represent a facet that has all but disappeared from British climbing”, Steve “the general”... 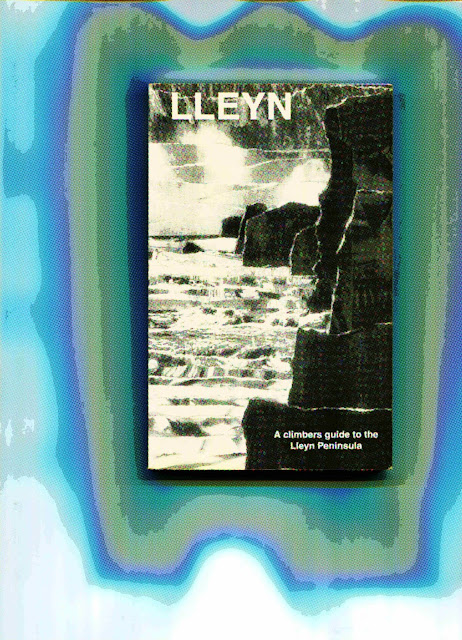