The Positive Dialectics of Moac Play 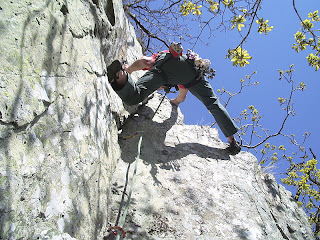 The rising fear grows exponentially as the lead rope runs out, perhaps a couple of micro’s are shoved tentatively in a crack somewhere below but the reality is that those wires are just there to prop up the fast fading self confidence.The single red 11mm rope creeps slowly out and the space below yawns, an open mouth waiting to swallow the hapless leader into oblivion.


The curtain of nuts on slings that hang from both sides of the harness right now are currently totally useless and purely decorative.Then, scrabbling over an edge and onto a narrow balancy ledge there is the crack, smiling sweetly and beckoning.
A shaky hand reaches down and selects a runner from the harness. With a satisfying clunk and a robust snatch on the 9mm double fisherman’s knotted sling, a Moac pops snugly into the crack and the lead rope snaps into the krab.

A deep, deep series of breaths are inhaled and exhaled, the tension quickly evaporates and the gaping maw closes shut. At least for now.Perhaps it’s a belay or perhaps it’s a critical runner but John Brailsford’s Moac allows the leader’s mind to momentarily rest easy.The Moac was and is one of those quintessential designs that is a developmental turning point. The Moac still largely defines passive climbing protection, and the basic design is still running today as the cornerstone of modern traditional rock climbing equipment.

It is fair to say that in the past, three Moac nuts were the probably main stay of most traditional climbers protection portfolios.One would used in a standard format and then the trickery and positive dialectics of Moac play began:The Moac standard rig with a 9mm cord forced through it and tied in a double fisherman’s knot was the perfect nut for a perfect placement. There were many perfect placements and a decent space for this super nut popped up on just about every pitch that we climbed; It is true to say that many Welsh classic pitches could be comfortably led with just a couple of good placements of this wonderful piece of kit.

Almost always but, as always there were exceptions…..


The rope sling ran high and proud of the top of the nut so sometimes the protruding rope would stop the nut placing well in a short crack or pocket. In these instances the number two Moac would be brought into play. Number two was threaded on ¾” tubular tape, the tape sitting more snugly in the crown of the nut and therefore fitting more easily into those short pockets or closed cracks.Then there was the ‘epic’ or ‘cheat’ Moac. This is nut had the knot placed as low as possible away from the nut. The upper part of the sling above the knot was tightly wound with insulation tape, often with a couple of strands of copper wire bound into the tape in parallel with the sling. The rigidly bound 12 inches or so of sling allowed the nut to be ‘stick’ placed really high overhead and clipped into the lead rope. This overhead shenanigan effectively allowed for a morally corrupt, but reassuring top rope over a tricky move or difficult section of climb.

The bound section of the sling also allowed the nuts to be placed and retrieved from much deeper cracks and fissures than normal.The slingless number 3 Moac nut had been taken to work or to the shed, This nut would be placed in the workshop vice and a couple of 10ths of an inch would be savagely cut back from both of the large faces with a very coarse hand file. Re-slung, this modified nut would now fit beautifully into the cracks that had previously rejected the slightly larger standard sizes and protected locations that otherwise would have been impossible or a serious fiddle with the standard sized Moacs. 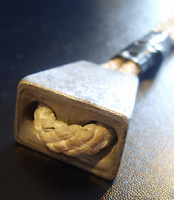 We rejected the standard sized nuts swaged wire slings. The wires lifted the nuts from cracks and the wire slings were always a smidge too short. In any case, if you were climbing on double 9mm ropes and the rope through the nut was 9mm we always felt it was a pretty safe bet.
The next question is what came first because later we discovered that another trip to the shed and the application of a large round file to the nut that cut a semi circular groove down the main faces of the nut towards the bottom of the nut enabled even better and more secure crack placements.

The core to this question is if we discovered this first or just copied the manufacturers?I prefer to think that we got there first and distinctly recall a friend showing me his newly doctored gear in the car park prior to a climbing session.Moacs were expensive and it was a large matter of absolute pride never to leave our gear behind on a climb. In actual fact, to recover jammed gear left by previous parties conferred a significant degree of personal supremacy. To this end a stout piece of galvanized fence wire about a foot long was procured - usually from a bit of scrap fencing. A looped handle was hand formed in one end and a short right angle bent about half an inch from the working end. This crude hook was remarkably effective in lifting nuts jammed in deep crevices and levering out stuck gear.

The pliable nature of this retriever wire enabled it to be bent into a safe circle when not in use in order to avoid accidental self stabbing in the event of a plummet or sudden move. The handmade tool was 'professionally' finished with a loop of tape or climbing string that also doubled as a disposable 'epic retreat' item Our prowess in retrieving abandoned gear was such that on rainy days when there was nothing else to do we would mount expeditions to known ‘nut eating’ locations and re equip ourselves with lost and abandoned gear.

Recently I did try to purchase a couple of these marvelous antiques via the internet.Sadly to no avail, so perhaps an expedition a certain series of known nut eating cracks on the south side the Llanberis Pass might see me still rewarded with a couple of these white, antique oxidized prizes!

*This title is stolen from “'Frank Zappa: The Negative Dialectics of Poodle Play' by Ben Watson. 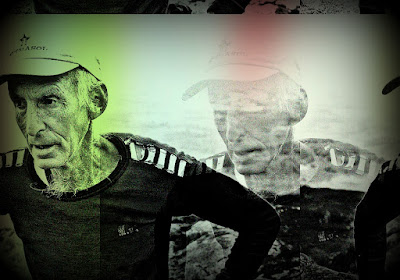