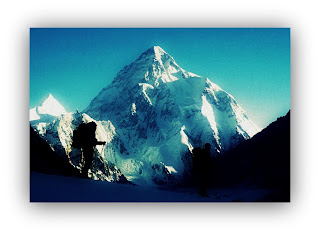 A team of Russian mountaineers is attempting to achieve what no other mountaineering party has achieved before. A winter ascent of K2 -the world's second highest peak. If the attempt is successful it will be the first time the pyramidal giant has been climbed outside of the more clement seasons.
The 15 strong team will endure temperatures of more than 50 below zero and wind speeds of up to 40 mph as they attempt to achieve their historic goal. The campaign is expected to take up to 3 months.

"This is only possible for a Russian team," said Victor Kozlov, the leader of the expedition, whose members put up a new route on K2 in 2007. "God willing, we can make it," he said this week in the Pakistani capital, ahead of his journey to the Karakoram range in the far north of the country.

Winter ascents of the world's 14 highest mountains are some of most prized achievements left in climbing. The 14 eight thousand feet peaks have all received  their first ascents in the summer months. Amid a crowded field where each year hundreds pay around $80,000 to be guided up Everest, winter ascents can help a climber stand out and get his or her name in the history books.

Winter climbers have been summitting the 14 highest peaks one by one the past decades. However, many peaks within the Karakorum region remained unconquered. The range is further north than the Himalayas, where Everest is located, and thus sees harsher winters. K2 is the northernmost peak of all the major mountains.

Teams attempted winter ascents in the Karakorum 16 times in recent years. The first success came this year, when a three-member team including American Cory Richards summitted Gasherbrum II. That left only four peaks, three of them in the Karakorum and one nearby in the Himalayas.

"If they make it up K2 in winter, it will be huge," said Billi Bierling, a mountaineering journalist with three "eight thousanders" to her name, including Everest.

Elite mountaineers thrive on first ascents, new routes on established peaks and climbing in the "purest style" possible. That typically means no porter assistance high up on the slopes, no oxygen bottles or no reliance on fixed ropes left by other parties.

The Russians, who start their ascent around Christmas, are not using oxygen and will have porters at base camp only. Their gear and food — including three freshly slaughtered yaks and, according to Kozlov, a little vodka — is being flown in by Pakistani army helicopters charging more than $7,000 an hour.

Winter climbing means less daylight and temperatures around twice as cold as summer, making frostbite more of a danger. Living conditions at base camp are more miserable, winds are more vicious, there is more snow, greater avalanche risk and climbers need more food and equipment to stay alive.

The one plus: "The mountains are less crowded," said Bierling.

A Polish team was first up an "eight-thousander" in winter, topping out on Everest in February 1980. The triumph set the stage for a decade of other successful expeditions, mostly by a group Polish climbers nicknamed "The Ice Warriors."

The Russians intend to follow the "Cesen" route up K2 before venturing to the 8,611-meter summit from a face that has never been climbed, hoping it will allow them to avoid the worst of the wind. They plan to fix ropes and establish camps up the mountain. They will then wait for a window of clear weather, at most a few days sometime in February or early March, and make a summit dash.

K2 is renowned for terrible, unpredictable weather and steeper slopes than Everest. In the summer of 2008, 11 climbers died in an avalanche, the deadliest incident on a peak that has the second-highest fatality rate among the "eight-thousanders." More than 300 have reached the top, but at least 80 have died trying.

In a written account, he said that from the end of December there was so much snow at base camp they had to dig tunnels to get into their tents. In 80 days on the mountain, they had just 10 days of good weather. They retreated after reaching a high point of 7,300 meters, frostbitten, their tents and ropes ripped off the mountain in the wind.

"We did everything that was humanly possible in those inhospitable conditions," he wrote. "We were simply powerless in the face of such dangerous, formidable and life threatening elements which people have to confront in the highest mountains."

Ashraf Aman, the first Pakistani climber to summit K2, said he thought the Russians stood a chance. "They are a strong team, and experienced, but it depends on the weather," he said. He urged them to be fearless: "If you face death in the face, it will run away like a dog." There are two other expeditions elsewhere in the Karakorams this winter.

Pakistan has long welcomed foreign mountaineering expeditions, which bring cash and jobs into one of the country's poorest regions. While climbers are hardy types, the spike in Islamist terrorism in the country over the last five years has led to a sharp drop in arrivals, said Naiknam Karim, from Adventure Tours Pakistan, which is organising the Russian push.

"The biggest hurdle is the law and order situation and the perception outside the country," he said. "Sometimes the climbers want to come, but their families don't allow it."