Careful with that ice axe Eugene: Return of The Angry Corrie! 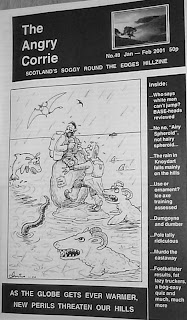 One of the outdoor 'zine' publications which became an influence and inspiration behind the creation of Footless Crow has emerged-phoenix like- from it's two year hibernation with a current edition selling like hot cakes -or possibly stale buns- from various outdoor outlets and through postal subscriptions. The Angry Corrie -the quirky and off beat Scottish hillwalking zine- was launched by Derbyshire born born Dave Hewitt in 1991 as a modest print publication which was sold in Scotland and northern England.

Lacking the glossy commercial style of contemporary outdoor publications,the editor opted instead for a aesthetically spare look which eshewed photographs and advertisements and instead offered lengthy articles on such things as obscure mountaineers,hill stats and remote howths. The publication usually opted for cartoons and drawings over photographic illustrations. TAC relied entirely on the unpaid contributions of it's enthusiastic supporters.

Dave Hewitt who formerly worked as an outdoor writer on the Scotsman before moving on to the Caladonian Mercury, has authored books on hillwalking in Scotland and the legendary hill walker, Alfred Wainwright.With his journalistic demands tied into his commercial work, TAC had fallen into a state of suspended animation until it's recent welcome re-awakening.
Although the journal does not cover pure rock climbing and mountaineering-being essentially a walkers publication-features on Scottish climbers have appeared on occasion and many of it's subscribers are all round mountaineers. If you haven't had the pleasure then The Angry Corrie can be purchased direct from...... TAC
Posted by Footless Crow at 12:35