Later this week..Mallory in Wales: the long day's journey into night 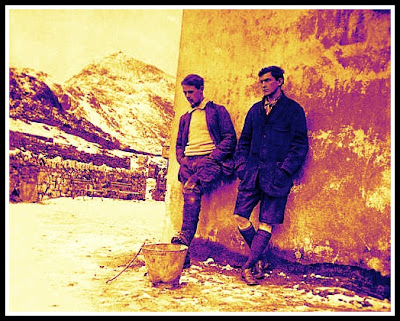 Siegried Herford and Mallory outside Gorphwysfa in the shadow of Yr Wyddfa-North Wales: Original photo The Alpine Club

"When George Mallory returned to the fray he entered a period which became his golden age on Welsh and English rock. 1911 was the year in which he established  some of his hardest routes. Routes which still have the capacity to intimidate and challenge modern climbers.

Staying with Harold Porter at the Snowdon Ranger in the relatively unfrequented Cwellyn area of Snowdonia. Mallory set his sites on exploring the cliffs of Llechog and the Nantlle Valley. In a glorious September campaign he and Porter looked at the Central Buttress of Y Garn which had defeated the great Thomson himself and saw the outstanding Swiss climber, Anton Stoop die in a subsequent attempt when a flake he was pulling over broke away from the cliff. By this stage, the Central Buttress had developed a fearsome reputation which had  repelled even those leading lights of the day. The completed route was subsequently left out of Carr’s 1926 Climber Club guidebook as too dangerous to justify inclusion.

After a very futuristic pre inspection of the crux pitch from above by Mallory, it was in fact Harold Porter who led the crux of the climb which ironically is now known as Mallory’s Ridge rather than perhaps more deservedly Porter’s Ridge ? During their stay at the Snowdon Ranger, the same pair established the equally bold Eastern Gutter and  the less demanding Trinity Buttress B  on Llechog  and opened up Cwm Silyn by establishing the areas’ first ever route. Four Pitch Gully on Clogwyn Cysgod. Finally, in 1911, Mallory climbed a direct 4c finish to Lliwedd’s Far East Cracks.

It had been a fine return to form after the accident .

Later this week,John Appleby's comprehensive profile of George Leigh Mallory's climbing career on Welsh rock. A golden period of exploration when he established his reputation as one of the UK's leading technical climbers. A period which saw him create some of the hardest routes of the era before his attention shifted to the greater ranges and he- in the public eye-was reborn as Galahad of Everest
Posted by Footless Crow at 10:58