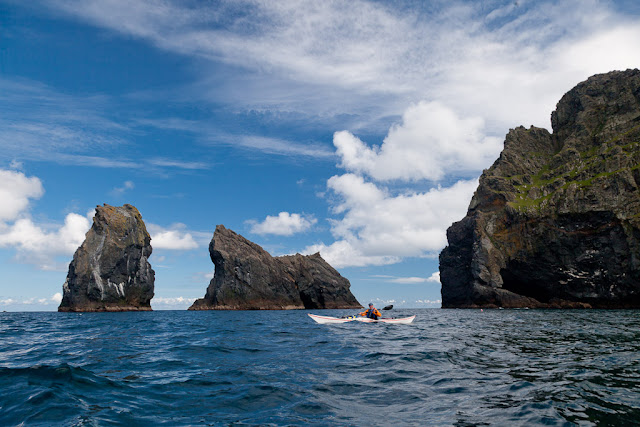 "I stumbled across the idea of kayaking to and climbing on St Kilda in 1983 whilst in Scotland, working from Loch Eil Centre, and overhearing two of their staff talking about a possible trip: "It's a big one, never been done by kayak before ... can't really miss it ... biggest cliffs in Britain."

A few months later, back in Wales after the rigours of teaching winter mountaineering skills on Ben Nevis, I wrote to the two lads to invite myself along. They were good climbers, I reasoned. They must be nice lads. They are bound to have me along. Not so!
Soon afterwards I found out about another two friends who were actually planning their own trip to St Kilda. I didn't want another refusal.
"Sue," I declared to my wife, "I'm going to St Kilda." "Oh yes...who with?'

Andy Halliday affectionately known as 'Shagger' to half his friends-I don't know why-said he'd come with me and by the time we were going two others had joined our team — Clive, a friend of Andy's and Nigel Foster. We discussed climbing objectives. I put in a double 9mm 50 metre rope, climbing shoes and Friends and Rocks. We considered faces of Conachair and Soay,both about 1000ft high. Too big for a small team of two, we decided, and so concentrated our attention on the smaller possibilities.

Andy and I talked of Stac Biorach. Would we be lucky enough to get there in the first place? '


This week-Welsh film maker Alun Hughes describes an epic paddling and climbing adventure amongst the dramatic islands of St Kilda.
Posted by Footless Crow at 08:58