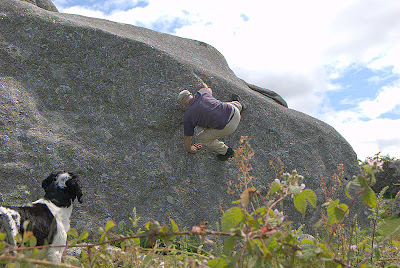 Out upon the heather
A shadow came onto me.
Her hair was hanging over,
Her face I could not see.

She ran behind the rocks,
I heard the hounds cry,
The image of a woman
With her head held up high.

From the Celtic fringes to the Celtic fringes and back again.Despite living in a part of North Wales which is infinitely more peaceful and less populated than most places in Cornwall, I frequently head 300 miles south to get my fix of those sublime green creeks, jagged ochre splashed cliffs and those rolling seas fixed beneath a big big sky. Little wonder artists from all over Europe and the UK followed the siren voice of the ocean. Drawing them to the Pagan lands to the West.

Given that a large proportion of those reading this piece online will be outside the UK,particularly in the United States and who may never have even heard of Cornwall; a quick bit of socio/cultural history .

Cornwall-or Kernow to give it it's correct Celtic name- is a land to which the original Britons fled as the Franco/Germanic/Norse invaders moved in from the European mainland.Forcing the Brythonic Celtic tribes west, to Wales, Cornwall and across the channel to Brittany and Galacia in Spain.
Whereas Wales kept it's language and identity to the extent that today it enjoys an autonomous degree of self government within the UK, pity poor Cornwall which despite having it's own language-closely related to Breton; A historical legislative body known as the Stannary Parliament; It's own flag-a white cross on a black background- and a distinct culture; lost everything as it was incorporated into England and legally fixed as an English county. The final ignominy being that in many legislative areas it is lumped together with that most English of counties, Devon as a constitute part of 'Devon and Cornwall'. 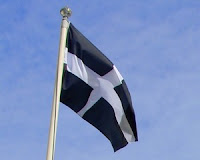 As a day to day language,Cornish effectively died out at the end of the 18th century although it was revived at the beginning of the 19th century by academics and today is taught in Cornish schools with many place names now bilingually identified.There is a Cornish Nationalist Party who campaign for a devolved assembly and recognition of Cornwall as a distinct Celtic region.To that end they have had some success with  the party gaining council seats across the region and seeing the language officially recognized by the EU under the European Charter for Regional or Minority Languages.

Traditionally,Cornwall has been one of the UK's most economically deprived regions and today is effectively divided between an essentially poor indigenous population and the financially advantaged English migrants who make up two thirds of the population. Cornwall's wonderful coastline which traditionally serviced a thriving fishing industry,has,in the last forty years,attracted a huge influx of wealthy incomers-particularly from the South of England,who have turned it's harbours,bays and estuaries into expensive yachting communities.A particularly damaging social trend in this regard has been the huge growth in the second home market where many attractive coastal villages have become ghost towns out of season with as many as 80% of the houses therein,owned by outsiders as holiday homes.

A couple of years ago, I wandered out onto the sand dunes at Porthcothan near Padstow with artist and film maker Jane Darke who with her late husband, Nick, a locally born playwright of some repute, lived and worked in an old house which backed onto the dunes.One late November afternoon when I was there, something seemed not quite right as I stood on the rippled beach and watched the waves crash in. As the light leeched from the sky it felt strangely unreal. The houses which fringed the bay all remained in darkness? Jane explained that her abode was the only house now occupied full time.The whole circling arm of properties had fallen into second home ownership. 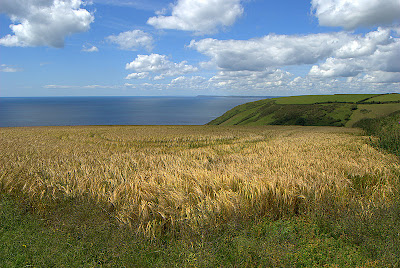 Notwithstanding Cornwall's economic hardships,one area where tradition has remained strong and resistant to malign external influences has been in the area of belief. As the Christian Church swept across Europe, it effectively employed a scorched earth policy.Violently suppressing traditional belief systems which could be described as Pagan. Obliterating sacred sites and building Christian places of worship and shrines on top of these sacred pagan places. Areas like Wales and Cornwall were the last redoubt of the druids and those who followed what is essentially a faith system compatible with Lovelock's Gaia principle. In common with belief systems like Buddhism,Taoism and those 'religions' of Native Americans, Australian aboriginals,Inuits and the like; Paganism rejects what to me is the unhealthy monotheism promulgated by Christian,Jewish and Islamic faiths and instead, embraces an infinitely preferable egalitarianism which sees humanity as an element within the web of life. A part of nature no more or less important than any of life's constituent elements.

Despite the all consuming advance of the church over the hearts and minds of the people,In Cornwall,the old ways continued to survive the Christian onslaught. Rural communities still turned to The Charmer; A Cornish equivalent of a Shaman or Medicine Man. Although the pastor or the local doctor was called when someone was particularly ill or at death's door, The Charmer was often the first to be called. Using what today would be describes as voodoo, the Charmer's book of cures often involved strange rituals such as passing under the belly of a Piebald horse, stuffing pillows with crow's feathers and hanging live chickens from smoke stained beams !

Bizarre..Indeed!  but any more bizarre than US TV evangelists exploiting mass hysteria amongst the feeble minded...providing their credit card details are in order.... or young men flying passenger planes into skyscrapers ?

If the dualistic faiths have their demons and infidels, Paganism has its white hares and adders.

It was a commonly held belief amongst those living in the rural backwaters was that those poor souls who were unfortunate enough to die through an injury or trauma were condemned to roam the earth as a white hare. The white hare was also seen to embody a black witch.The archetypal old crone of fairy tales who now roamed the earth as a fleet footed Jackrabbit; sending the pursuing hounds howling in fear as they looked into its burning eyes.
Traditionally,rabbits have also had a hard time in rural Cornwall and for seafarers in particular, the mere mention of a rabbit at sea was to guarantee empty fishing nets or worse.

Recent archaeological surveys in parts of Cornwall have revealed just how widespread elements of paganism were in Cornwall. Even after the reformation and rise in popularity of the new John Wesley inspired reformist branch of Christianity. In 2003 thirty five 'Witches pits' were discovered near Falmouth. Each lined with swan pelts and containing animal hide,unhatched eggs,human hair, fingernails and remains of iron cauldrons. These are said to date from the 17th century when Cromwell's Protestant stormtroopers attempted to obliterate any hint of pre-Christian paganism. Ruthlessly destroying ancient sacred sites in the manner of a Christian Taliban militia. Those unfortunate enough to be caught by Cromwell's zealots were tortured and executed without mercy. 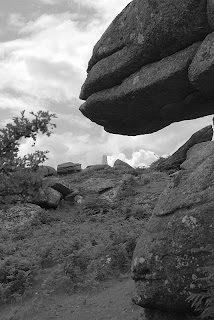 By chance, I happened upon one place in Cornwall which clearly exemplified the attempts of the Church to first overwhelm and then recreate a sacred site into a Christian shrine. The Saints Way is a long distance path which connects the north and south coasts of Cornwall and links the traditional fishing towns of Padstow and Fowey. Perusing an ordinance survey map of the area I noticed that the path run up against an interesting looking tor- Helman Tor not far from the historical capital of Cornwall, Lostwitheal. As we approached the tor ringed with granite outcrops and boulders,I passed by a stone circle in a clearing just off the Saints Way path. Five sets of four stones in a circle with an elder tree- which is afforded great importance within the Wicca religion- at its centre. Meandering up to the summit of the tor,I noticed a white cross adorning one of the granite boulders adjacent to the summit trig point. Ironically,someone had carved the anarchist circled A in the trig point concrete next to the cross.

I wandered around the cropped grass plateau atop Helman Tor between great granite boulders which looked like Barbara Hepworth sculptures and played around on some of the rock problems hereabouts. Apart from my partner and Gus the Springer,we were alone. As I sat back on the grass beneath an overhung outcrop,I noticed a flash of colour in the scrubby hawthorn nearby. A fertiliser sack or bailing twine ? Indeed not. Within those sharp thorny branches a colourful pentangle gently rocked in the westerly breeze. Despite their holy paths and white crosses, the old ways are clearly still deeply rooted in the dark Cornish soil. 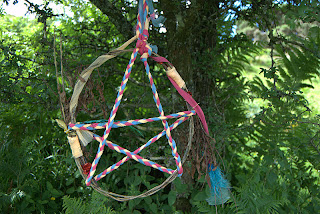