How to get killed in the Alps 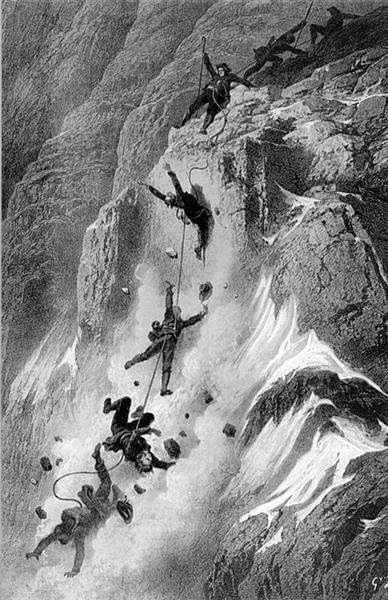 Getting killed in the Alps is becoming rapidly an international mania. This is evidenced by the statistics of the Swiss Alpine Club, already quoted, showing that last year 165 tourists and guides somehow managed to break their necks, while the number of wounded, those who managed only to break something,arms, legs or ribs - is quite beyond compute. The periodic massacre is due largely to the fact that alpine dangers are unseen. On the sea shore, for instance, sane persons who cannot swim would not think of bathing in a rough sea, for the sight and roar of the waves terrifies them. In the Alps it is just the contrary, for nature, it would seem, takes pains to cover the deadly crevasses with thin snow bridges and avalanches come down without warning where the novice would least expect them. The most beautiful alpine flowers, too, contrive to bloom overhanging the most perilous abysses.

Some years ago it was the elite which climbed, while the man-in-the-street stayed in the street, or looked at the mountains from his hotel window. Now it is a mad scramble of a hundred thousand souls to reach some snow-capped summit. As most of these know nothing of the techniques of getting killed, the following rules may be of service, and are easily memorized: A fascinating way is to go and pick edelweiss; To pluck it one must approach from above. Descend slowly, therefore, clinging to some small shrub. If a passing guide chances to call warning, reply that you know what you are about, and that tourists, as well as guides, have a right to pick alpine flowers. Lean slightly over the precipice- and as one hand grasps the alluring bloom, with the other hand pull on the shrub, which will come loose, roots and all! There will be a grating sound of loose,moving rock, the overhanging ledge will cave in,and one may soar, edelweiss in hand, into the void below.

There will be three lines in the newspapers about it, and a caravan of expert guides will find the body. Climbing without guides is why so many Germans and Austrians succeed – vide statistics - while English and Americans somehow, unfortunately, cannot get over the habit of choosing always the best ones. Eighty per cent of the fatalities occur to tourists climbing without guides. Signor Cumani, an Italian artist, started to climb Mont Blanc alone twenty years ago and he has never been heard of since. M. H. N. Riegel, from Philadelphia, in 1898, also attempted Mont Blanc alone, and guides found his body later on the Glacier de Miage, to which he had fallen from several thousand feet above.

Sitting down in avalanche paths is sometimes effective. A friend of mine, dispensing with guides, climbed up above Pierre Pointue on the route up Mont Blanc and deliberately sat down quietly to lunch in a gully where avalanches come down off the Aiguille du Midi every fifteen minutes. Suddenly the air was filled with singing,flying stones and ice, the velocity making the smaller stones invisible. He failed to get hit, however, and disgusted, leaving everything behind, fled to Pierre Pointue, where he recommenced with absinthe cocktails.
Climbing without heavily-nailed boots, too, has its advantages. An American, who considered it commonplace to ascend Mont Blanc like everybody else, tried it with patent leather shoes. At the "Jonction" of the Glaciers des Bossons and de Taconnaz he slipped into a crevasse, dragging with him an English friend. Guides had great difficulty in getting them out. Hot words followed the cool crevasse, and the two Anglo-Saxons, each blaming the other for what had happened, indulged in a warm pugilistic encounter in the snow. But for being attached to the guides by rope both men might to-day be buried somewhere in the glacier.

The famous guide, Emile Rey, of Courmayeur, lost his life on the Dent du Géant by neglecting to renew some worn nails. He was descending with Mr A. C. Roberts, an English climber, and as the weather was growing bad, they unroped so as to move quicker. In descending a chimney Rey jumped to a narrow shelf covered with small pebbles, when his feet went out from under him and he fell over 600ft. His body was found and brought to Courmayeur two days later. Nothing is easier than falling over a precipice. Guides say that if a tourist has a tendency to vertigo he should confine his ascension to peaks frequented by cows. To get killed, therefore, the alpinist with vertigo should tackle the Matterhorn, Schreckhorn, or the Aiguille Verte.

While it lasts the sensation of falling several thousand feet must be extraordinary. Dr Cauro, an alpinist, broke his neck falling off the Montagne de la Cote, a goat-frequented buttress of Mont Blanc; while a French actress, in 1902, trying to be polite, was instantly killed on the Mauvais Pas, by the side of the Mer de Glace, while attempting to pass outside when she met a party coming in the contrary direction. In case of passing beneath a forest fire on a mountain side, stop and have a look at the thick yellow spirals of ascending smoke. In an amazingly short time the roots of the trees burn, releasing the stones lodged between them, and these, falling, bombard the footpaths below. By watching the fire from an exposed vantage point the spectator will be hit squarely in the face by a twenty-pounder and his body will be recognized later by visiting-cards, which, by the way, every novice should carry in his pocket.

Do not bother about heavy underwear, double pairs of socks, mittens and dark goggles when going above the snow-line. If the sun shines one may go blind, and, therefore, more easily fall over a precipice. In case of bad weather coming on suddenly, as it often does, one can freeze in a very short time. It is said to be a delicious, drowsy death. A party of three English and American tourists, with eight guides, during bad weather froze on Mont Blanc, and ten days later, when the storm abated, watchers below with telescopes saw them sitting dead in the snow.

Making rash glissades is a method adopted sometimes even by experienced alpinists. The glissade starts in sunshine in fairly soft snow, but in passing swiftly from sunshine into shadow, where the snow is freezing, one encounters an icy crust, and there is no possible way of stopping. With one swoop one goes until he strikes the wall of a crevasse or bergschrund, and then well, it does not matter.

Persons addicted to heart trouble should undertake violent exertion and quick changes of atmospheric pressure. It may put an end to their trouble. For the same reasons those without physical force to resist fatigue and cold weather should undertake long climbs. This is a tiresome end, however, and the least desirable. Getting struck by lightning is not so easy. The unhappy porter, Casoli, who was struck on the summit of Mont Blanc and charred from head to foot, lived three days. The guide Joseph Simond, also, was killed by lightning while descending the Aiguille du Geant with the guide Joseph Ravanel and M Fontaine, the celebrated French alpinist. Simond was the only one carrying an ice-axe. Take note, therefore, tourists, and when in the midst of an electrical disturbance seize the steel ice-axe!

Breaking rope played a fatal part in the catastrophe on the Matterhorn when Lord Francis Douglas and three others were killed. Moral: Do not take old rope, for it might not break. Falling stones have killed more than one in the Alps. In the early morning, when everything is frozen tight, falling stones are rare. It is in the afternoon, when the sun is melting hot, that the silence is continuously broken by their dropping. Amateurs when amusing themselves in such places should do so in the afternoon when the sun is hot!

Finally, in choosing a guide for excursions always take an inveterate drinker. Dr Hunter Workman, the famous Himalayan explorer, told me not long ago that when in the Alps he unwittingly was fortunate enough to get caught in a difficult passage with one who was taken with delirium tremens. Dr Workman, although he turned guide, failed to get killed, and has not yet forgotten his sensation.

For those who know nothing of the mountains, and who continue lusting for the flesh-pots, there is left always the climbing receipt of Mark Twain: Hotel veranda! Bottle of whisky! Telescope!

Frederick Burlingham: 'How to become an Alpinist' (1914)