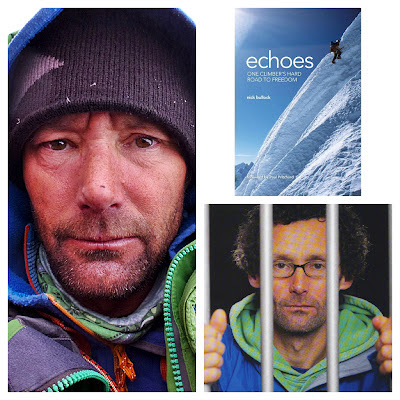 Original photos: Nick Bullock/Vertebrate/Mountain Equipment
It seems standard practice these days,for climbing autobiographies to kick off proceedings with an exciting prologue chapter. A device I presume,designed to grab the reader by the short and curlies straight from the off and keep them 'on message'. The message in Nick Bullock's case being...'I have seen things you people wouldn't believe'. Nick Bullock's Echoes employs this device in Sam Peckinpah proportions and by the time you have waded through the snot, blood and cerebral fluid, liberally splattered across a prison gymnasium and a Welsh crag in the opening chapter, it's a relief to arrive at Chapter One 'Brick' -exhale, and relax in a bit of domestic mundanity.

Echoes follows very much in Andy Cave's 'learning  to Breathe tradition. The working class wage slave who discovers himself through climbing and with one bound- well lots of small bounds- breaks free and finds true fulfillment and happiness in the great outdoors.  Except that Bill Peascod got there, if not first ,than a few decades before, in his superb autobiography, 'Journey after dawn'. Some might also point to the Joe Brown and Don Whillans 'autobiographies' except they were ghost written and a bit rubbish so we won't go there.

Like the aforementioned Yorkshireman, Nick Bullock's roots were fairly humble by the middle class standards of climbing activism in the UK. Born in the north Midlands to parents who were solidly Conservative and of the 'good old Enoch' tradition. Nick followed for a while in his parents reactionary footsteps, became a young gamekeeper and nurtured a special disdain for coal miners. I would have liked to have been a fly on the wall at a meeting between a young Bullock and the young NUM activist, Andy Cave! However, like the repentant sinner, Nick bends over backwards to distance himself from this side of his former self and throughout the rest of the book, he successfully massages liberal sensibilities and drops in 'right on' observations on queue.

The first quarter of the book revolves around his experiences in the prison service. In many ways this is the strongest section of the book for me. Nick paints an often harrowing picture of life behind bars. A spiritually withering experience for both prisoner and warden alike.An episode which can seen to mentally and physically diminish  both parties in it's dehumanizing structure and deathly routine. For the prisoner, freedom can be weeks away; for the warden it is usually a life sentence. The seeds for his escape are planted when he pursues a training course as a Prison PE instructor.He discovers climbing  when he attends an outdoor activities course at Plas y Brenin, and the rest as they say.....

The steep learning curve which the writer goes through as he learns the ropes in the Welsh mountains is convincingly related as the gauche young beginner throws himself at rock and ice like a man possessed. Soloing everything on site and quickly building up his strength and experience to the extent that within a few months he has packed so much into his nascent career that already his Colin ' I'm mad me' Hunt side is starting to break through. As climbing partners are roped in ,Nick ratchets up his CV by throwing himself at harder and harder climbs but not without mishap. A cack handed effort at a Joe Brown jamming crack at The Roaches and a peeler at Tremadog which saw him bouncing down Belshazzar Gully like silver ball in a pinball machine, could well have seen him measured up for a wooden overcoat rather than a visit to the local infirmary. But like the man who falls off his bike and gets straight back on, Nick cut off his plaster cast and flicks through the guidebooks and plans even harder campaigns.

As far as the climbing sequences go, I found the UK sections more illuminating and entertaining than the Alpine and Greater Ranges stuff. This is just a personal preference and probably age related. In another review I commented just how hard it is to creatively re-work such an overworked genre which from here on in I shall categorize as 'sub zero suffering and derring-do'. It's not so much that I've been there and bought the T shirt. The T shirt has been through the washer so many times it's worn out, full of holes and is now being used as a rag to wipe oil paints off a palette knife!

It's certainly entertaining though, reading his descriptions of cruising Dinas Cromlech at great speed suspended by a sky hook in a shallow pocket or taking a whipper off John Redheads Gogarth test piece The Bells-The Bells. A route which runs through the book like an distant rite of passage although I couldn't make out if he ever actually nails it?

All this action is set against his prison life. In fact, in one late chapter the author comes over all Ed Drummond, by juxtaposing paragraphs set in HM Prison with passages detailing his struggles on a hard new route in Peru.  He also goes for a curiously dated Shipton/Tilman approach by referring to partners,even close friends like Jules Cartwright,by their surnames. Nick does drop in at intervals the fact that he is very driven and competitive. That's OK...nothing wrong with being driven and competitive ... so long as you're not entering a modesty competition!

Overall, Echoes is very entertaining and credit should be given for the authors vivid portrayal of prison life.The writing in the main is spare and matter of fact. A style which suits the rather dark subject matter. Prison life does not really lend itself to romantic prose!  I believe that Echoes came too late for the latest Boardman Tasker award but I'm sure the author and publisher can rest assured that Echoes will be a shoe in for the 2013 Boardman Tasker short list. The good folk at Boardman Tasker cannot,it seems, get enough of works like Echoes which fit into a tried and tested structure and follow a formula which undoubtedly appeals to readers and reviewers alike. Echoes works as a piece of mountain writing entertainment. It might be more Blues Brothers than Citizen Kane but then again, more people would want to see John Belushi gyrating to James Brown in technicolor than see a crystal ball roll across a mansion floor in black and white.

In the mean time, away from his laptop, Nick Bullock is well on his way to disproving that old climbing adage about there being 'old climbers and bold climbers but not many old bold climbers'   He might have sacrificed an Argos carriage clock from the Prison Service but he's going to have a fathomless seam of mountain memories to look back on when that time comes when the only thing to look forward to is the past.

Echoes is published by Vertebrate Publishing.