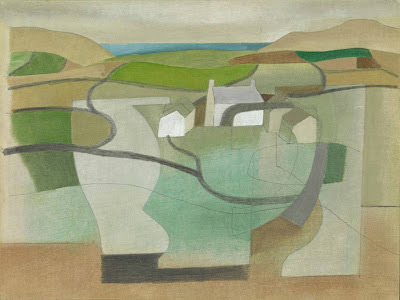 BBC4′s documentary, The Art of Cornwall, explored how the small colony of artists in St Ives became as important as Paris or London during a golden creative period between the 1920s and 1960s. The central focus of the film was on Barbara Hepworth and Ben Nicholson – the latter first visited St Ives in 1928 when he discovered the mariner and primitive painter, Alfred Wallis.  The programme also examined how a younger generation of artists, such as Peter Lanyon and Patrick Heron, were also influenced by the Cornish landscape.

Nicholson and Hepworth were central figures in the thriving modernist art scene in 1930s London. Nicholson had begun his career painting landscapes and still lifes, but inspired by Mondrian, gradually turned to abstract art.  With the outbreak of war in 1939, recently married to Hepworth and with three young children, Nicholson reluctantly decided to leave London for the safety of Cornwall.  As the couple drove to the end of their road in Hampstead, they noticed Mondrian standing on the corner. They pulled over, rolled down the window and begged him to join them. He refused: he hated the countryside and anything green. Nicholson once recounted how Mondrian, noticing the leaves of a chestnut tree just visible through the skylight of Nicholson’s Hampstead studio, shook his head in disapproval and said: ‘Too much nature’. 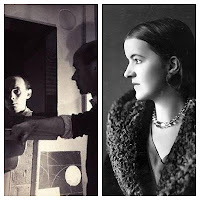 When he first arrived in Cornwall, Nicholson went on with the white reliefs that he had been making in London.  They were made in the spirit of quietness and composure that Nicholson had admired in Mondrian’s studio. In St Ives, however:

Outside his Cornish studio the world must have seemed exceedingly disorderly: most days the sky going by at a ttremendous pace; the sluicing of waves and exploding of breakers, that endless pitiless tugging at the headlands by the sea; prevailing winds, quoits and stone hedges; the underworld of tin lodes; the hardship of it all, generastion after generation; harbours, like churchyards, bobbing with coffins.  Only very slowly did this have an effect on what he was doing.
- Christopher Neve, Unquiet Landscape 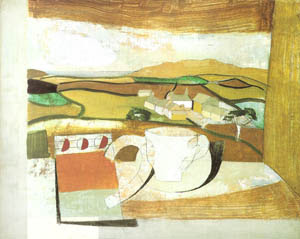 But the landscape did have an effect, modulated through his abstraction.  In addition, the film suggested, Nicholson turned to landscapes in order to earn a living during the war years. Paintings from the 1940s often show a landscape observed through a window with still-life elements in the foreground (below and top). 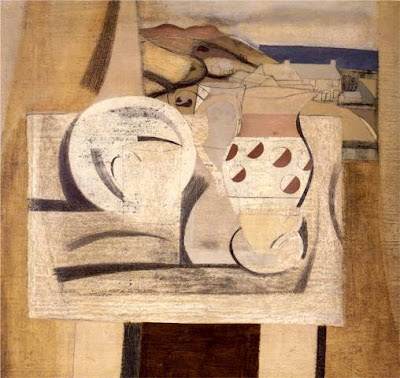 Landscape by itself is meaningless, but it works on our feelings in profound ways, arousing in us a sense of ourselves in relation to the outside world. What does it feel like to stare up at the night sky or to confront a mountain?  A picture which mimics the appearance of natural phenomena will miss the point, not just of their essential nature, but of ours too.  Instead, some equivalent has to be found: an equivalent of the way in which they act upon our sensibilities.
- Christopher Neve, Unquiet Landscape

In 1943-45 (St Ives, Cornwall) below, the still life of cups and vessels of the foreground interact with the far-reaching landscape stretching away towards the distant sea.  This work was completed in 1945 with the addition of the union jack as a gesture to celebrate V.E. Day and the end of the war.

These landscapes, with their primitivist style, reflect the influence of Alfred Wallis, whose work Nicholson had first encountered in St Ives in 1928. With fellow-artist Christopher Wood, Nicholson had chanced upon Wallis, seeing him painting through the open door of his cottage. As Nicholson later described it, they:

passed an open door in Back Road West and through it saw some paintings of ships and houses on odd pieces of paper and cardboard nailed up all over the wall… We knocked at the door and inside found Wallis.

Alfred Wallis had spent most of his working life as a fisherman. He claimed to have gone to sea aged nine and was involved in deep-sea fishing, sometimes sailing as far as Newfoundland in Canada. In 1890 he moved to St Ives where he became a marine scrap merchant. He began painting at the age of 70 ‘for company’ after the death of his wife.  Wood and Nicholson saw in his unconventional paintings an authentic, expressive vision, and a freshness and immediacy they aspired to in their own work.

Wallis regarded his paintings as memories, recollections or expressions of his experiences – he said he painted ‘what used to be’. His principal subjects were ships at sea, especially the working sail ships that had disappeared during his lifetime, and the St Ives townscape and the countryside immediately surrounding the town.  He didn’t use traditional linear perspective, instead arranging his subjects in terms of relative importance – the main subject of a painting would be the largest object, regardless of where it stood in physical relationship to its surroundings. 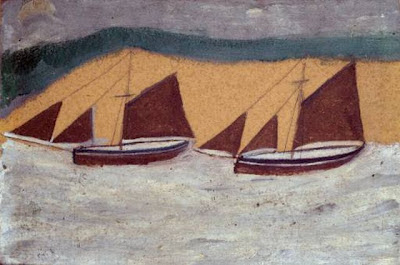 Wallis painted seascapes from memory, in large part because the world of sail he knew was being replaced by steamships. As he put it, his subjects were ‘what use To Bee out of my memery what we may never see again…’ [Wikipedia].   Having little money, Wallis improvised with materials, mostly painting on cardboard ripped from packing boxes using a limited palette of paint bought from ships’ chandlers.  Two Boats (above) is painted on the back of a Selfridges box lid, while The Hold House Port Mear Square Island Port Mear Beach (below) was painted on the back of a printed advertisement for an exhibition.  It is a view of St. Ives in which the elements are rearranged so that they depart from strict topographical accuracy. It shows the promontary at St. Ives known as ‘The Island’, part of Porthmeor Beach (one end of which adjoins the Island), and Porthmeor Square. 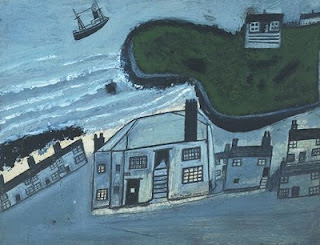 After the war, though Nicholson returned to abstraction, he continued to paint the Cornish landscape. At the close of the programme the presenter, Dr James Fox descended into the bowels of the Tate where an assistant hauled out from storage the huge Patrick Heron painting, Cadmium with Violet, Scarlet, Emerald, Lemon and Venetian (below) – perhaps the most arresting moment in the documentary.

Patrick Heron was born in Leeds in 1920 into a family of uncompromising nonconformism. His father was an art lover, socialist and pacifist who had been a conscientious objector in the First World War, while his mother, too, was a pacifist and of fiercely independent spirit, with a passionate eye for the natural world.  Heron was a lifelong socialist and pacifist, a founder member of CND, and an active conservationist. He hated with a passion the Tory governments of the 1980s and 1990s, and refused a knighthood when it was offered by Margaret Thatcher. 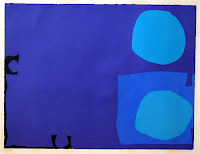 In 1925 the Heron family moved from Leeds to Newlyn, where Patrick’s father ran a textile business. Patrick’s early years in Cornwall were idyllic: he was influenced deeply by the light, colour and landscape of what he called the ‘sacred land’ of his childhood. He never forgot childhood holidays that the family spent at Eagles Nest, the house above Zennor. In 1956, Heron was able to buy Eagles Nest, and moved in with his wife Delia and their young family.  From that time on, the house was the centre of his imaginative existence:

This is a landscape that has altered my life, the house in its setting is the source of all my painting.

Though his work now became non-figurative, it remained profoundly influenced by the landscape of West Penwith.  Among his first works of the period were the garden paintings, meshes of colour streaked and dribbled vertically on to the canvases.

Azalea Garden [below] was one of the paintings made in the first months at Eagles Nest… I referred to the series as ‘garden paintings’, since they certainly related in my mind to the extraordinary effervescence of flowering azaleas and camellias which was erupting all over the garden, amongst the granite boulders, at Eagles Nest when we moved down to begin our lives here. …The well-known crisis which confronted many British painters of my generation – I mean the moving over from overt figuration, however abstract, to overt non-figuration – overtook me at about this time. 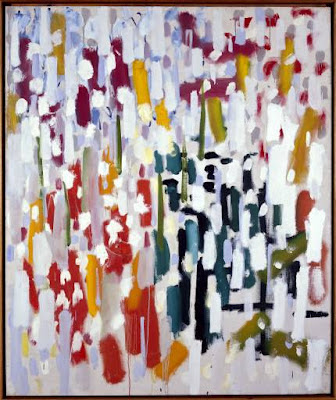 The wild landscape around Eagles’ Nest inspired the floating boulder shapes and promontories of the large, Matisse-like abstract canvases that followed in the 1960s and 1970s – acrylics and prints on paper, based on bright, interlocking abstract shapes


Patrick Heron designed the huge stained glass window that was installed in the entrance hall of the Tate St Ives gallery when it opened in 1993.Patrick Heron and his wife Delia are buried in the churchyard at Zennor.  This photo was taken when we visited in 2006. 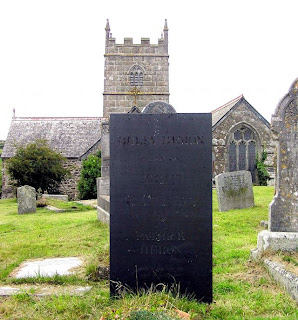 Inside the giant's skull

Birkness Combe If you walk away from Malham Cove along the mossy edge of the beck, then stop and lean backwards until you can just see ... 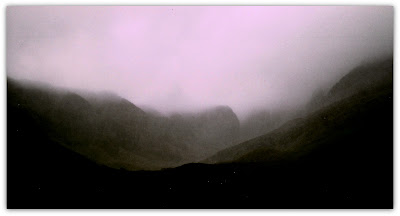