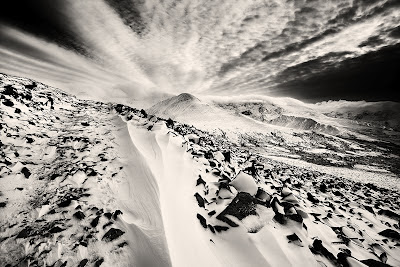 Virginal Explosion
Having just had the pleasure of casting my eyes over renowned landscape photographer, Glyn Davies' eagerly anticipated latest collective works - Welsh Light - it is fair to say from the outset that the collection cannot fail to further cement his reputation as one of our most gifted and imaginative photographers.

Despite being very much a Welsh artist, Glyn in fact was brought up in Cornwall, before crossing the Severn Estuary in his early 20's and settling in the land of his antecedents.

Welsh Light is the fourth collection in a series which began in 2007 with Anglesey Landscapes Volume One and continued in 2008/9 with a second Ynys Mon series and a collection based around Nant Gwrtheyrn on the Llyn Peninsula.

This time around, the photographer has spread his creative net across the uplands and coastlines of north Wales and the island of Anglesey where he is based, and captured a series of images which carry with them more than just technical proficiency but an almost tangible atmosphere. In effect, for those viewers who like myself are familiar with many of these mountain and coastal scenes, the photographs within Welsh Light evoke a powerful sense of being there. Of standing in the photographers' muddy boots and tasting the salted air,feeling the viperous mountain gusts or listening to the plaintive clapperclawing of a circling raven. 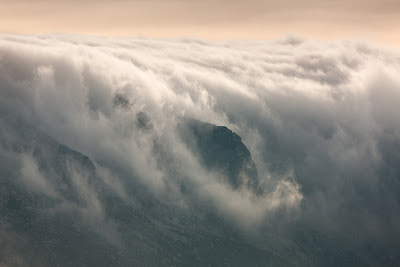 Cloud Breakers
This is the difference for me, between those photographers like Glyn Davies who are artists, and those professional photographers who despite being technically proficient and capable of taking 'nice' photographs, fall down when it comes to creating atmosphere in a photograph. For amateurs like myself who have some half decent cameras in their possession- who possess a modicum of photo editing know how and who take thousands of landscape photographs a year, it is sobering to realise that we are only taking snaps compared to artists like Glyn !

Glyn Davies belongs to a honourable tradition of creatives. Artists who take a Ruskin-esque view of the natural world as 'a repository of goodness'. It is a spiritual dimension within art which includes creative figures from Coleridge to John Muir..from The Pre Raphaelite Brotherhood to Edward Abbey.

Although there are a few places in north Wales which haven't felt the heavy hand of man, places still remain which feel timeless. Particularly around the rugged coastline of western Ynys Mon, where remote coves and crenelated cliffs look out to an empty sea. Here Glyn has perfectly seized those timeless qualities and captured the evocative sensory nature of these quiet places. 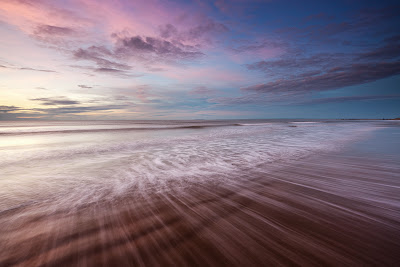 Rippled Pink
In the mountain areas where man's presence is all around-in the grey stone walls coiling across bleak hillsides, gaunt chapels set amidst tumbling cottages and barren slate mountains frozen beneath a sea of snow- his lens still manages to capture the living essence of these places. An essence which transcends a mere one dimensional image. These landscapes shaped by humanity, for all their imperfections, still have a sense of scale which exudes a harmonious synchronicity between mankind and nature.

A relationship which has become increasingly threatened by the advancing industrialisation of the uplands, coastlines and seascapes, particularly the rapid development of huge onshore and off shore wind farms. Developments which in effect aesthetically and spiritually rape many of our most beautiful and fragile environments.

However, despite the barbarians at the gate, we should at least be thankful to have creative figures like Glyn Davies around, to chronicle and record the magical essence of our mountain vistas and those otherworldly big sky seascapes. Welsh Light succeeds brilliantly in doing just that. Marking moments in time which move beyond the fleeting moments of man and celebrates the timeless eternal qualities of nature...... Ruskin would approve! 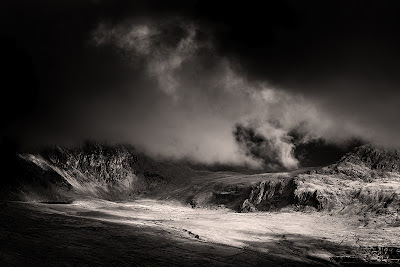 
Photographs and titles: Glyn Davies-copyright
Welsh Light is available from the author's website.