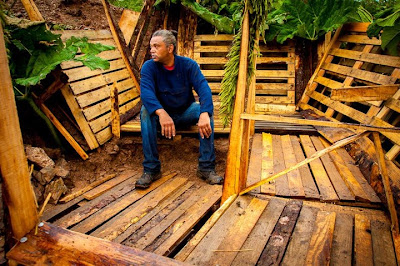 The lack of black activists within UK mountain activities is a notable and much debated issue within the climbing world. For one young black man from Liverpool 8- better known to the outside world as Toxteth- escape from these mean streets came via a self funded outdoor instructors course in N Wales.
Using his skills and experience as an instructor, Samuel Farmer eventually moved with his family to St Agnes in Cornwall to set up an outdoor charity project to enable young people, particularly young black people from the inner cities, to experience activities such as rock climbing,kayaking and horse riding.
Despite enjoying great success with his mission, Samuel and his family began to suffer sustained racial abuse from neanderthal elements within the local community which culminated with a horrific arson attack. The following is an interview Samuel gave with The Voice journal. At the time of writing no one has ever been arrested or charged.

WHEN YOUTH project manager Samuel Farmer moved to a small village in Cornwall, he was filled with high hopes of starting a life in the country. He never could have imagined what happened next. Here, he tells David Woode how his countryside dream turned into a nightmare.

“…After enduring years of racial abuse in the quiet Cornwall village where I run a youth project, the barn where I store equipment and personal belongings was razed to the ground in a racially aggravated arson attack (on January 8).

“In a matter of minutes, flames had charred canoes, surfboards, musical instruments and my partner’s artwork.

“It’s not the first time we’ve been targeted by arsonists; the barn was set alight 18 months ago but this time the damage was devastating.

“The fire had started in the early hours of the morning, but the police didn’t notify us until just after 11am.

“We raced over to the scene and saw all of our possessions smouldering.

“I’ve had people scream ‘go back to the jungle you black bastard’ at me. The words ‘Emmets Go Home’ (Emmets is a Cornish term meaning ‘outsiders’) has been scrawled on sign posts at the end of my lane. What am I supposed to think?

“In 2007, I moved to Cornwall with Carla, my partner of 22 years. She’s an art teacher, and together we wanted to create something that offered inner-city kids a holistic approach to education and recreation. Why is it that we don’t see black kids windsurfing? Rock climbing? Riding horses? We wanted to address that.

“We bought a plot of land in the small village of St Agnes, which is 10 miles from Truro, and established The Hope Project.

“Over the last two years, we’ve welcomed 300 youngsters from inner-city areas in Cornwall and Liverpool and encouraged them to take part in outdoor pursuits.

“We knew there was a possibility this would upset some of the villagers, but we never imagined it would reach this climax. And while it’s not the first time we’ve been targeted by arsonists, the police have done nothing to protect us in the past.

“Since moving here, rocks have been hurled at me and my five-year-old daughter, and as a family we’ve endured a torrent of racial abuse. We also went to the police after a brutal attack on one of our horses, which lost an eye as a result.

“A lot of people don’t like the fact that I’m bringing inner city youths to the village. They think I’m importing crime into the area.

“But The Hope Project isn’t just for inner city kids from Liverpool or London. I started this project in Cornwall and, believe it or not, there are a lot of urban kids here who have never been to the beach or engaged in outdoor pursuits, and I wanted to address that.

“It’s quite unusual for a black family to up sticks from the hustle of urban city life and set up in rural countryside, but we are trying to be pioneers.

“I was born in Toxteth, Liverpool, in 1965 to an English mother and an African-American father, and I grew up on one of the worst streets in the area.

“The influx of West Indian migrants to the city had created divisions within the community and racism weaved its way into the area’s consciousness.

During the 1970s, the National Front were rampaging the city, and if you were young and black you seldom strayed from your area for fear of being chased by ex-mods wielding Stanley knives.

“The police were famously unbearable, and as a youngster I couldn’t walk down the street without being pulled aside by a policeman. But it all came to a head with the Toxteth Riots in July 1981. The disturbances were a mix of simmering racial tension, poverty and hostility towards the police.

“I lived in a house with my mother and 15 siblings, and from a young age I tried to provide for her. But there were times when I’d watch her cry over a bowl of rice and I would think, ‘what more can I do?’

“The pressures of inner-city life made me leave home at 14. With my belongings in a shopping trolley, I lived with a group of bikers for a couple of years.

“The late 1980s acid scene heavily influenced them, but never me. My only drug of choice was the great outdoors. It might have something to do with coming from a large family. I craved breathing in fresh air and witnessing calming yet spectacular views.

“When I was 26, I saw an advert for a mountaineering course in Bryn Du, which is in Llanberis, North Wales.

The course cost £6,000, it took three years to qualify and I taught it for 15 years. I had always harboured the intention of escaping city life, and starting The Hope Project was the realisation of that dream. But why should we be forced to run away from people calling us ‘n***ers and destroying our livelihood?

“While not everyone in Cornwall is horrible and racist, you have to wait for people to say hello to you. There’s nothing worse than being snubbed.

The fire has been a huge setback for us. My partner has suffered panic attacks and is unable to visit the site.

“It’s unlikely that we’ll be able to run the project this summer but we are determined to get back on track.

“It’s a revelation when you have a youngster who’s at the end of a rope abseiling down a windy cliff and the force of nature is upon them. They’ll put their trust in you because you’re showing them something different.

“We’re living under a cloud where race is on the political agenda, and it’s important for me to continue to stand up for what I believe in.”

When contacted by The Voice, detectives investigating the fire said they would act vigorously if evidence of racism was found.

A spokesman for Devon and Cornwall police told The Voice that officers are currently investigating the January 8 fire at Farmer’s barn near Truro, Cornwall as arson.

Panther said: “Mr Farmer believes he has been targeted because of his skin colour, and if we find this is the case it will be treated seriously and investigated thoroughly. It will also give the court, if anyone is charged, greater sentencing powers.”