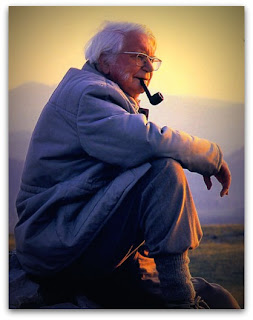 
"It is twenty years since 'the greatest fellwalker' , AW Wainwright was cast to the fell winds atop Haystacks above Buttermere. In the intervening years, the iconic image of the avuncular, flat capped, bluff Lancastrian with a smouldering pipe firmly fixed in a jowly jaw, has remained constantly in the public eye.

Indeed in the years since Wainwrights death there is no sign that 'The Wainwright industry' is grinding to a halt. Indeed,each year sees a fresh batch of glossy coffee table Wainwright tomes re-printed, New updated versions of his pictorial guides, ditto desk diaries,address books,walkers notebooks,calendars dvd's etc.

However,despite the general hagiographic treatment of Wainwright the man and his work from the media- Think Julia Bradbury traipsing around the Lakeland Fells in BBC's 'Wainwrights Walks', quoting at length from one of his pictorial guides as if AW was Rabindranath Tagore- Hunter Davies' 2002 biography of Wainwright, brought into the public domain some less than attractive elements of the man's life and  character

Despite Hunter's sensitivity in dealing with the less savoury parts of his subjects' character, enough information came out both in his book and in contemporary articles by other writers to suggest that Alfred Wainwright was actually was not the loveable curmudgeonly eccentric beloved of Daily Mail readers and BBC presenters but was in fact, something of a dark,egotistical and self centred individual that most people would cross the street to avoid!

Not surprisingly though when dealing with iconic cultural figures like AW, nothing is quite as it seems and in truth,the heart of the AW enigma lies somewhere between the two extremes. So...as AW himself would say in his Lancashire drawl..let's get down to brass tacks. '

This week,twenty years after his death in 1991, John Appleby takes a warts and all look at Alfred Wainwright- the man and his legacy. Despite disturbing more than a few skeletons in Wainwright's closet,the author finds much to admire in 'the greatest fellwalker' .
Posted by Footless Crow at 08:38